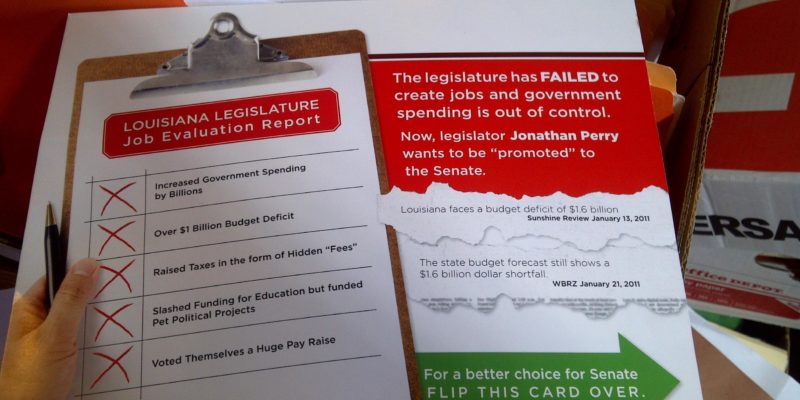 The crucial race for Senate District 26 between Republican state Rep. Jonathan Perry and Democrat Vermilion Parish police juror Nathan Granger has heretofore been a relatively quiet one, as Granger and Perry have both run positive brand-building ads and focused on building their ground games.

But as the race enters its final days before Saturday’s election, that’s changing.

Granger, whose most recent campaign report says he’s raised and loaned himself $310,000 for the campaign, has been on the air with negative radio ads accusing Perry of voting to trash higher education and failing to prosecute a seven-time DWI offender as an assistant district attorney. He also has a mail piece circulating which assesses the state legislature’s performance as a whole in a negative fashion and ascribes those failures to Perry… 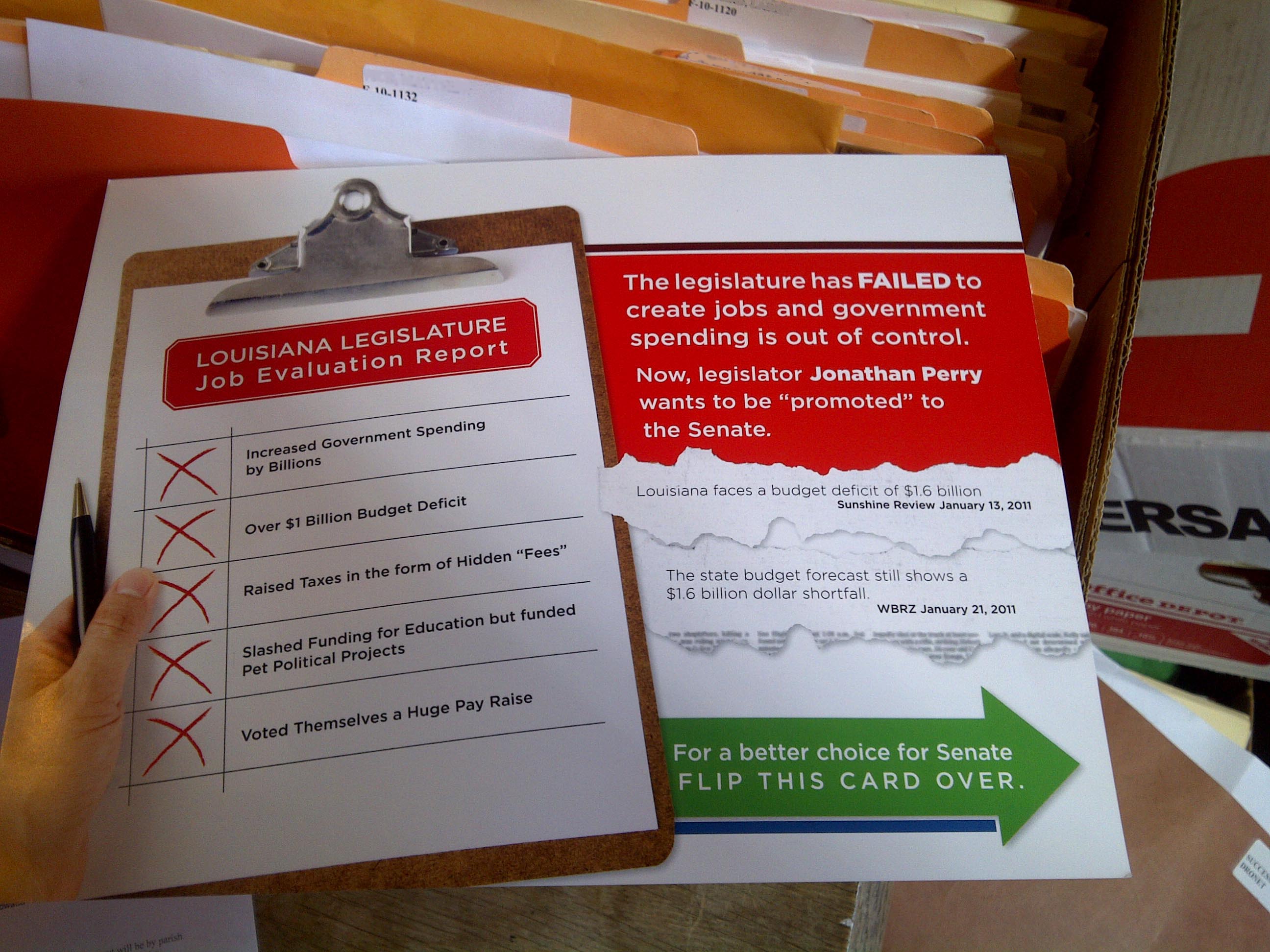 The piece is more than a little disingenuous. Perry voted against adopting the amended budget bill in the House last year which contained increased spending from the Democrat-controlled Senate, for example, though the bill did pass. The House bill the Senate chose to amend would have provided for a smaller state budget and thus would have given Louisiana a far stronger starting point for this year’s fiscal situation.

Perry’s fiscal record, in fact, is one reason why LABI rated him at 100 percent last year.

And Perry also voted against the controversial legislative pay raise in 2008.

We attempted to ask Perry today about the attacks from Granger, but he was unavailable for comment. He was at his grandfather’s funeral this afternoon.

Today, though, some fur did fly back in Granger’s direction.

The word on the street is that Devney was brought in by the Democrat Party and Organizing For America to run Granger’s campaign because of the crucial importance of the District 26 race. He does seem to be a ringer of sorts, as in 2009 he did campaign work for the party in Virginia during that state’s statewide cycle. But Devney spent a good part of last year working in Louisiana; OpenSecrets has him collecting some $13,000 in salary from Nov. 30, 2009 to May 28, 2010 from the Democratic State Central Committee/Louisiana.

Interestingly enough, while Granger is enlisting a rather left-of-center cabal of campaign helpers and attacking Perry from a left-wing perspective, he doesn’t appear to walk the walk as such a candidate. A search of his donations to national campaigns at OpenSecrets indicates he’s about as Republican a Democrat as one might find…

This makes Granger a bit difficult to analyze. One fair conclusion would be that he’s a centrist; another would be that Granger gives money to candidates he thinks will help the oil business in Washington. John may be a Democrat but he was a fierce defender of the industry, and he currently serves as the president of the Louisiana Mid-Continent Oil and Gas Association.

The Dead Pelican opines that given the extremely negative attitudes folks in District 26 have about the president, particularly his policies regarding offshore oil – which is a major driver of employment and commerce in the district – news that Granger is surrounding himself with Obamites could turn the race. That’s possible; what seems relatively clear as well is Perry’s campaign is developing a very strong ground game.

Granger’s campaign has some volunteers as well, though our sources tell us much of his army came from the courthouse machine in Acadia Parish – the same courthouse machine who opted to honor Edwin Edwards as the grand marshal of the Crowley Rice Festival before the former governor was even released from prison.

There was even more controversy in the race today when Perry pulled an endorsement from Empower PAC, the political action arm of the Greater Lafayette Chamber of Commerce. The PAC’s release on the race indicated they were aware of the contentiousness of the endorsement of a practicing attorney over a business owner…

In making its endorsement, the PAC interviewed both candidates, Perry and Nathan Granger. Both Perry and Granger are conservative candidates who understand business issues and would represent the interests of business in the state legislature.

Perry was primarily selected for endorsement because the PAC membership was impressed with his stances on education issues and regionalism efforts. Perry earned a 91% voting record with the Chamber during last year’s legislative session.

Maybe this PAC thing should be reconsidered. It seems to step in it a good bit. Nathan Granger is an EXTREMEMLY  (please note the capital letters) successful businessman and capitalist… On actual success in business I would find it hard to believe Perry is that much more successful than Granger. This is another example of the chamber dividing rather than uniting overall business interests.

The Independent also secured a copy of an e-mail sent to the chamber by Jody Broussard, Granger’s Number Two man at Quality Companies which was less than complimentary…

Yesterday, we were notified of Empower PAC’s recommendation to endorse Jonathan Perry over local businessman and one of our principals, Nathan Granger, in the upcoming election for the Louisiana Senate Seat District 26. …we truly find this endorsement offensive, not only to Quality Companies, but to the Lafayette business community as a whole.

Nathan Granger and Troy Collins founded Quality Construction & Production, LLC in Lafayette in 2001. What began as a very small business with a shoestring budget has blossomed into one of Acadiana’s top 50 privately held companies in both 2009 and 2010, employing nearly 500 Louisiana residents on a regular basis. QCP has also been recognized nationally in magazines such as Entrepreneur and Construction Today for its success and growth. These articles not only shine a bright light on QCP; they also highlight the business environment in Lafayette. QCP has always been active in the community through its numerous charitable works. Based upon the information below pulled straight from the chamber’s website, it would seem that Mr. Nathan Granger lives the creed promoted by the chamber, while the chamber does not!

“At the heart of the local economy and the backbone of the nation’s economy, you’ll find a chamber of commerce. Celebrating and promoting the diversity and uniqueness of their communities, chambers of commerce form the fabric of America.

Chambers are the primary source for businesses and individuals seeking information on the business climate in a community. Representing the vocal point for businesses, chambers often are the catalyst for business opinions and represent business needs in the community. As the collective voice, chambers speak from a much broader economic framework than individual businesses or politicians ever could.

The work of local chambers of commerce is vital to the community’s business life. Chambers provide bottom line programs for businesses large and small. They fight for pro-business legislation and form public and private alliances. With the support of chambers, small businesses open their doors … prosper … and grow.”

How can the Chamber claim to help small businesses “open their doors … prosper … and grow,” and not support a Lafayette small businessman in an election against an attorney with no connection to Lafayette?

The Empower PAC’s press release outlining its rationale for supporting Perry over Mr. Granger is laughable. It notes Mr. Perry’s 91 percent voting record with the chamber during last year’s legislative session while completely ignoring Mr. Perry’s 70s percentile ratings in the two sessions preceding last year’s. It also points to Perry’s stances on education and regionalism issues, but fails to provide any details regarding those stances. Given that Mr. Granger’s wife is a teacher, and Mr. Granger’s education and experience are primarily in business (Mr. Granger earned an MBA from USL), I truly doubt Mr. Perry’s stances on education and regionalism are more in line with business interests than Nathan’s!

We would appreciate your kind response to this correspondence by close of business tomorrow.

With two days to go until Election Day and very light turnout in early voting, this appears to be anybody’s race – particularly with the rapid ramping up of the heat in the campaign. If there is momentum, it seems like it would be Perry’s despite Granger’s financial advantage.

The District 26 seat won’t be won, though, without a fight to the finish. The events of the last couple of days have made that clear.