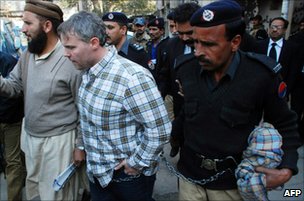 Amid the impending chaos and potential bloodletting in Egypt tomorrow, it looks like the Obama administration may have very quietly put America’s relationship with another important Muslim country under the gun.

That would be Pakistan, with whom we apparently may be threatening with a stark diminution of relations. ABC News has the story…

National Security Advisor Tom Donilon told Ambassador Husain Haqqani, according to two Pakistani officials involved in negotiations about Davis, that the U.S. will kick Haqqani out of the U.S., close U.S. consulates in Pakistan, and cancel an upcoming visit by Pakistan’s president to Washington, if Davis, a U.S. embassy employee, is not released from custody by Friday.

So who is Davis? Well, he’s Raymond Davis.

Raymond Davis is styled a “technical advisor” to the U.S. consulate in Lahore, and he says he has diplomatic immunity from incarceration. He’s in jail there because he shot and killed a couple of Pakistani ISI goons (the Pakistanis say they were ISI goons – the State Department just says they were regular goons) who, he says, surrounded his car after following him. Davis says they brandished weapons and threatened him, so he did what he did in self-defense.

The Pakistanis haven’t been moved by Davis’ story. They’re still holding him. And they’re having a court fight in which it’s being said since his name isn’t really Raymond Davis and he’s an “impostor,” diplomatic immunity doesn’t apply to him. It seems they have a point, since the State Department apparently hasn’t been too clear about whether we want to call him Raymond Davis or not, either. It doesn’t help that the wife of one of the dead ISI goons poisoned herself to death last week in protest of Davis’ having shot her husband.

It gets even worse than that. Apparently, after Davis shot the two ISI goons he got on the horn to the consulate and gave them a Mayday. The consulate sent a car tout de suite – and their driver promptly ran over and killed somebody in the attempt to get to this guy before the cops did.

Not surprisingly, the Pakistanis in the streets say Davis is a terrorist, and it’s being predicted that Pakistan is about to become Egypt, Part 2.

A more egregious diplomatic/intelligence cockup you will not find.

But U.S. officials believe Davis’s life is in danger the longer he spends time in a Lahore jail cell, the target of anti-American resentment from Pakistani citizens, some of whom have called for Davis to be executed.

“Our first fear is that the sentiment of the street in Pakistan is, ‘Let’s take him and hang him,'” said a current senior U.S. official.

Supposedly, Davis was being followed – according to the Pakistanis, mind you – because he was under suspicion of being a spy. Obviously they read as many John LeCarre’ and Vince Flynn books as we do. Davis seems pretty clearly to be a CIA spook, but given how many of those have populated Pakistan in the past decade you’ve got to wonder why they’d even bother to worry about him.

The Pakistani ISI, though, is shot through with Islamists. Ask around, and you’ll see that were it not for the ISI the Taliban would never have taken over Afghanistan. So a pattern does seem to exist that would indicate what’s going on here.

In late January, those officials say, Davis was asked to leave an area of Lahore restricted by the military. His cell phone was tracked, said one government official, and some of his calls were made to the Waziristan tribal areas, where the Pakistani Taliban and a dozen other militant groups have a safe haven. Pakistani intelligence officials saw him as a threat who was “encroaching on their turf,” the official said.

Still, this thing is a head-scratcher.

Without Pakistan, there is no Afghan war. We cannot adequately supply our troops in Afghanistan without the supply lines we’ve established that run from the port of Karachi overland into the theater of operations. That supply line has been dicey in the past few months.

And our involvement in Afghanistan is nothing short of poison among the Pakistani public. That country might be the most anti-American place on the planet, and the government there is as weak and unstable as any you’ll find. Something like this could be more than enough to push them over the edge. What replaces the Zardari government there is not going to be particularly friendly to America, for certain.

So for us to issue such an ultimatum to the Pakistanis on Davis’ behalf – knowing, as we must, that the reaction there will be akin to coupling a gas leak with a struck match – would have to indicate this guy is crucially important to us.

Or here’s another possibility – maybe Davis isn’t that important. Maybe we’re willing to sell him out. Maybe we’re throwing these demands out there in the knowledge Zardari and his people are going to tell us to get bent – and in so doing, gain some street cred with Muhammad Six Pack over there. Some time in the relative future, after things die down and Zardari gets a bounce out of this, we’ll offer up a few nice juicy ostrich steaks or buffalo nickels to him in order to give us Davis and he’ll appear to have at least wrangled something substantial from us as a benefit for standing strong.

Either way, we still had somebody racing to get this guy the night he shot those two people – so much so that we ran over some poor guy in a frantic effort to save his bacon. He had to have had a great deal of value at some point even if he doesn’t have any now, the above contrarian theory notwithstanding.

One thing is for certain. Well-executed spookery doesn’t make it into the papers. This did. This is Burn After Reading, not Firefox. And it really doesn’t reflect well on this administration.