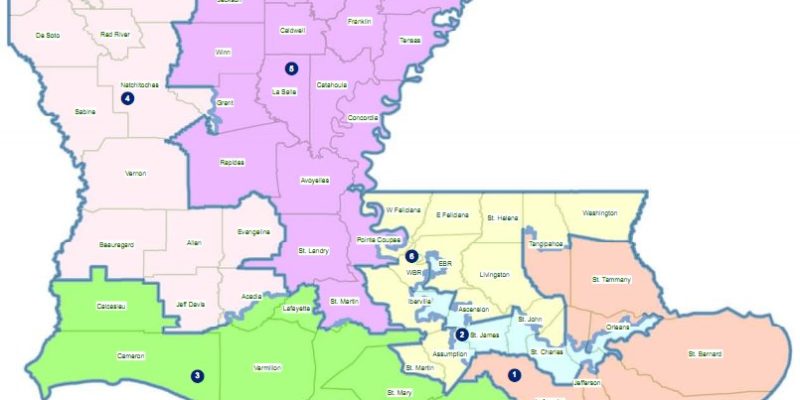 It seems that the pressure of a redistricting battle is more than enough to expose the cracks in Louisiana’s political infrastructure. This week’s doings in the state senate as it attempts to remap Louisiana from seven congressional districts down to six show that a shiny new GOP majority might be little better than the one the Democrats enjoyed from the end of Reconstruction to earlier this year.

Why? Because it seems that Republicans can’t even agree with each other. Depending on whom you talk to, some of them don’t even like the party.

Amid news earlier this week that a Republican senate majority had passed a Democrat congressional remap on a 23-15 vote – seven GOP senators flipping sides to back SB3, sponsored by Sen.Lydia Jackson (D-Shreveport) – all hell has broken loose.

Specifically, accusations that U.S. Rep. Charles Boustany (R-Lafayette), who is going to face a tough 2012 matchup with U.S. Rep. Jeff Landry (R-New Iberia) in almost any circumstances created by a new congressional map, exclaimed something acutely undiplomatic about his political party while advocating for the boundaries of his future district have thrown the whole state GOP into turmoil.

Boustany was quoted by LANewsLink.com as having said “F*ck the Republican Party” during debate last week on a congressional remap…

What do Caroline Fayard and Charles Boustany have in common? Evidently their hatred for Republicans crossed party lines last week as both indicated their despise of the Republican party. While Fayard’s comments have been well documented, a well placed source has told LaNewsLink.com that last week during Congressman Boustany’s abrupt reversal of his support of Senator Kostelka and Riser’s legislation and two north south congressional districts.

He was questioned about why he would support Senator Lyndia Jacksons bill that endangered 3 Republican congressional seats for the next ten years. His response “F#CK the Republican Party”. Clearly Congressman Boustany, like many in the legislature during redistricting, is solely out for himself.

Boustany’s camp denies he said it, denies he thinks it and denies he supports any bill in particular. The Congressman’s position is that he wants to keep Lake Charles and Lafayette together in a district which is essentially a box bordered by the Gulf, the Sabine River, a line somewhere north of I-10 and a line somewhere east of Lafayette.

But it turns out it’s that position – and Boustany’s vigorous defense of it – which is causing the trouble in the first place. Because while Boustany’s camp denies he backs any bill in particular, others say he gave his support to Jackson’s bill – which would create an I-20 district with a 42 percent black population and an uphill fight for U.S. Rep. John Fleming (R-Minden) to be re-elected against a Democrat challenger.

That set Fleming off in a major way. Roll Call’s Nathan Gonzales caught up with him, and he didn’t pull any punches in criticizing his fellow doctor-congressman…

Fleming accused Boustany of being willing to turn a Republican district into one that favors Democrats, a move he said would “basically set the stage for a Pelosi comeback.”

“In order to perfect one district, he really fouls up the rest,” Fleming said.

Republicans understood that Boustany had his own interests to protect but couldn’t believe he would sacrifice another GOP seat in order to create a perfect district for himself when he already had a good one.

“This was a bait-and-switch proposition,” Fleming continued. “If we knew earlier, we could have planned and worked against it. I suspect this was [Boustany’s] plan all along.”

There is word that the kerfuffle has also drawn the ire of National Republican Congressional Committee chairman Pete Sessions, who is notorious for his opposition in intraparty squabbling. Assumedly Sessions will be admonishing Boustany to stop scaring the fish away. And Landry’s camp seem happy to stand by and watch Boustany’s time in the hot seat this week.

But while Jackson’s bill passed the Senate, Gov. Bobby Jindal immediately threatened to veto it over the issue of two vertical districts coming out of North Louisiana. The governor had said all along that two vertical districts was what he favored, and an I-20 district wasn’t acceptable. Particularly (one imagines) not one drawn, as Jackson’s was, in such a fashion as to maximize the chances of electing a Democrat.

Sen. J.P. Morrell, D-New Orleans, said one of Chaisson’s selling points to Democrats is the notion that a Shreveport-based vertical district could be competitive for a Democrat if it includes Natchitoches and Alexandria. But Morrell said that might not be enough to mollify legislators who want east-west jurisdictions in the north.

Morrell said there is resentment among senators over Jindal’s mention of a veto. “It’s asinine for him to use the veto threat,” Morrell said.

Morrell pointed out that Jindal pledged to leave the redistricting issue to lawmakers and opened the session with a speech urging that partisanship and self-preservation take a back seat to the greater good. “Whoever gave that speech,” Morrell said, “isn’t the same governor.”

Morrell’s invective, of course, is asinine in itself given that Jindal has to sign any bill that would make a remap into law. Of course Jindal will be involved in the process. And by touting the plan of Jackson and Senate president Joel Chaisson, who’s a holdover from the senate’s former Democrat majority, based on the partisan advantage it holds for Dems he vacates any claim he might have to criticize Jindal.

And that means Louisiana has a number of “bipartisan” Republicans – hardly a surprise given the identity of some of the GOP supporters of Jackson’s bill. Among the 23 yea votes were such luminary turncoats as John Alario, Jody Amedee, Fred Mills and Norby Chabert, who were Democrats just weeks or months ago. The other three GOP votes – Blade Morrish, Johnathan Perry and Mike Michot – assumedly supported the plan out of local considerations or affinity for Boustany’s position (or at least that’s the accusation).

Amid Jindal’s veto threat, yesterday afternoon a House committee shot SB3 down on a 10-9 vote. It won’t become law. As such, this morning the Senate is back to considering SB24, a bill by Sen. Neal Riser (R-Columbia) which would contain two vertical districts. Riser’s bill, which failed by one vote earlier in the week, has been amended to satisfy some local concerns in Calcasieu Parish, among others.

The current map of SB24’s districts… 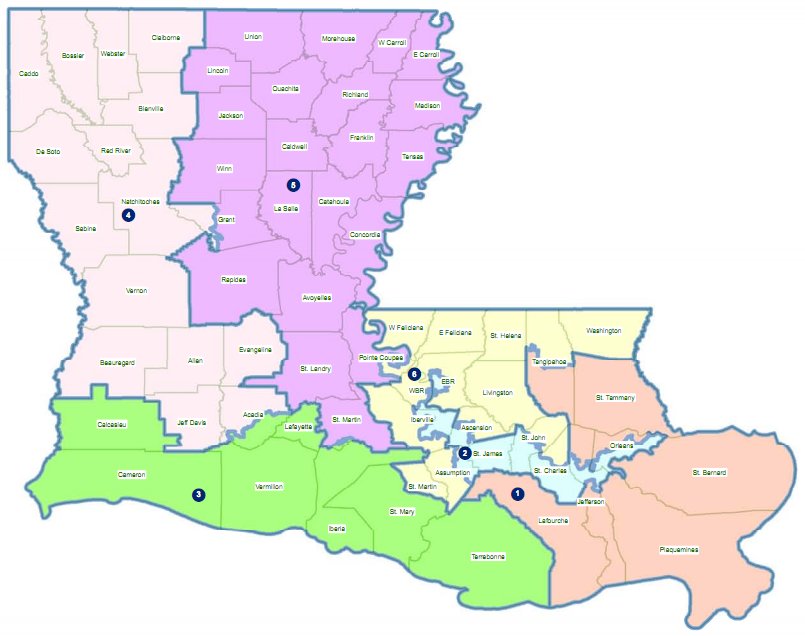