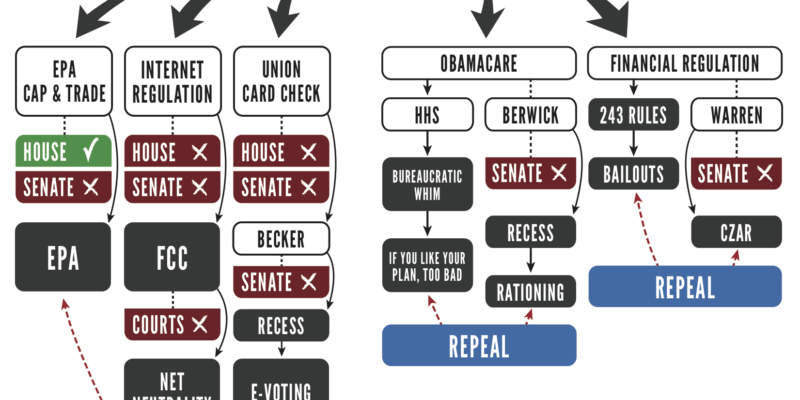 This week the U.S. House of Representatives will vote on a measure to stop the Obama White House’s plan to greatly expand the government’s control over the Internet.

H.J. Res. 37 will stop the largest expansion of government power over the private sector development of broadband since the birth of the Internet.

Tell your Member of Congress to vote YES to stop the FCC’s power grab.

Regulating the Internet under the guise of “Net Neutrality” has been an obsession of the far left for years.  The scare tactic has always been that if government does not regulate, phone and cable companies will destroy the Internet.

The members of the private sector are painted as “evil capitalists” who cannot be interested in expanding deployment of broadband to all Americans.

However, the FCC glazes over the fact that the private sector, in the few short years since broadband has been in mainstream use, has provided over 95% of American’s with broadband access on its own.

Despite a ruling by the D.C. Circuit in Comcast Corp. v. F.C.C. striking down the FCC’s effort to regulate broadband, the FCC has chosen nonetheless to carry on in its mission to take over the industry.

This is hardly a surprise and the Americans for Prosperity’s Obama Chart, shows that it has become standard procedure for the Obama administration to ignore federal courts, Congress and the wishes of the American people.

The FCC, though formed as an independent body, is led by President Obama’s close friend Julius Genachowski.

Furthermore, President Obama has stated that he will not take a backseat to anyone on Net Neutrality, and the FCC’s efforts to chip away at the private sector knows no bounds as they continue to use broad language meant to “encourage” deployment as a mandate to take over the industry.

Contact your Congressman today and tell them to vote YES on H.J. Res. 37 to stop Obama’s power grab over our nation’s communication backbone.

Jacob is the Grassroots Coordinator for Americans for Prosperity – Louisiana, an organization of over 15,000 citizen leaders committed to advancing every individual’s right to economic freedom & opportunity.  Find out more on Facebook and Twitter.