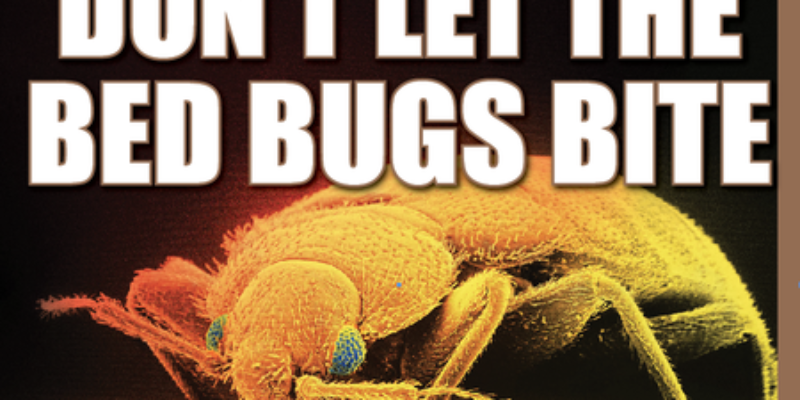 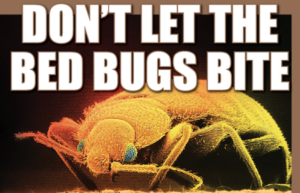 They come out at night to suck your blood, but don’t sparkle and aren’t filled with teenage angst –like vampires from the Twilight Series. They are bed bugs, reportedly even more annoying than teenage vampires, and recent stories like this one from KLFY Channel 10 in Lafayette helped me decide to look into this epidemic, as well as under my mattress.

I called a good friend of mine this morning, Brian Guillot of J&J Exterminating in Alexandria, to ask questions about bed bugs. Brian knows more about bugs than any person I can think of and is always willing to share his knowledge –whether you want him to or not. Usually that’s NOT, especially when dinner conversation turn to cockroaches.

This time, however, I wanted to learn about bugs, so I gave Brain a call and learned a lot.

Bed bugs have been bugging people a long time it seems, with records of troubles stretching back to 400 B.C. They were nearly eradicated in the World War II era, thanks to the use of insecticides like DDT. DDT, however, has since been banned because of its supposed harmful effects, resulting in the spread of disease and famine throughout much of the Third World, but I digress. Back to the problem at hand, bed bugs.

Brian told me that his calls to get rid of the pest have skyrocketed in recent years, as the news stories I have read indicate. The primary reason that bed bugs are thriving is the highly mobile nature of our culture. Bed bugs are “hitchhiker pest,” as Brian put it. They latch onto clothes of people who visit places like hotel rooms and make their way into homes. It only takes one to create an infestation since a single pregnant female can lead to thousands in your house.

“In the last few years, I’ve seen lots of cases,” Brian told me. “I will always ask people if they have traveled recently and nine out on ten times the answer is yes.”

They also are widely spread by people bringing used furniture into homes.

Adult bed bugs are light brown to reddish-brown, flattened, oval shaped and have no hind wings but front wings are vestigial and reduced to pad-like structures. Baby bed bugs are translucent, lighter in color.

Here is the bed bug life-cycle for all of the insect enthusiast out there: 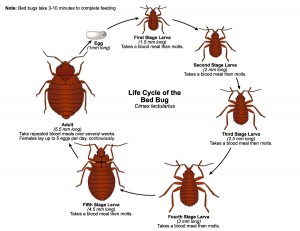 For those of you who just want to know how to get rid of them, they are very resilient pest. They can survive for a long as 15 minutes in minus 26 degree Fahrenheit temperature. They are usually able to be killed at 113 degrees Fahrenheit, but I was advised that it’s usually not a good idea to put your bed sheets in the oven. They can also live a full year without feeding, so don’t feel too comfortable thinking those winter blankets you are taking from the closet don’t have bed bugs.

I was told that the best way to get rid of them is by calling an exterminator…but what else would an exterminator tell me? No kidding, though, that’s probably what you are going to have to do if you have the pest and your whole house will need to be treated.

If you want to learn more about bed bugs, watch this video. It’s billed as “Emmy award winning documentary” on bed bugs. They give Emmy awards out for this kind of thing. I never knew that, but I’m learning all kind of things this morning. My favorite part is when the pest-control guy brings up Al Qaeda and the controversy about whether we are at war with bed bugs ensues. Sign of the times —even bed bugs are somehow political:

That’s all I can give you on bed bugs. If you ever want to learn about cockroaches, invite Brian to dinner and have a strong stomach.