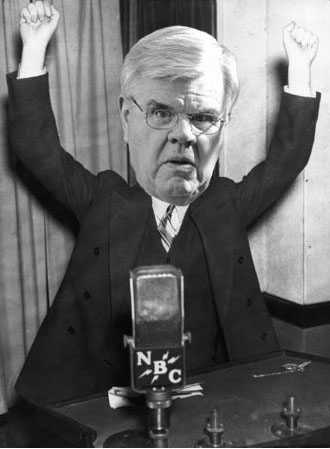 The highest-ranking Longite socialist in Louisiana was back to his usual clown act at the Baton Rouge Press Club yesterday.

A Louisiana regulator said Monday that utility companies make too much and changes are needed so that some of the profits can be returned to customers.

Louisiana Public Service Commissioner Foster Campbell, of Bossier Parish, told the Press Club of Baton Rouge that financial markets are selling home mortgages for about 3.5 percent interest and certificate of deposits for about 1 percent interest. But privately owned utility companies are allowed to charge their customers about 10 percent profit, he said.

“If we look at that real hard, we’re going to find that they’re earning in excess,” Campbell said in a wide-ranging speech that touched on many topics, including the need for high-speed Internet in rural parishes and how a tax on oil and natural gas processed in Louisiana would allow the state to abolish income taxes.

Campbell doesn’t deserve to be taken seriously, as even the PSC’s other Democrat Lambert Boissiere thinks he’s a moron.

But that having been said, it sure seems like this kind of swill from the mouth of what’s supposed to be a responsible public official needs to be roundly denounced.

First of all, Campbell is not qualified to determine what is an acceptable profit margin for a private business – even one whose operations he as a public service commissioner regulates. It’s true that the PSC’s job description includes a provision to “allow utilities an opportunity to earn a fair rate of return on their investment,” and therefore it is in fact within Campbell’s purview to attempt to arbitrate what’s “fair.”

But Bananas Foster has a problem with reality. He doesn’t know what he’s talking about.

Here’s an exercise for you. Go put a business plan together and take it to a bank or a venture capitalist and promise them a 9.1 percent profit margin once your company is fully operational and out of the startup phase. See how far you get with capital then.

Naturally, Campbell wouldn’t know about that. He’s never needed anything but the silver spoon he was born with. So for him to pull a 10 percent profit margin out of his posterior as a marker of unacceptable greed isn’t exactly scientific.

The industry average profit margin for electric utilities is 6.9 percent. At 6.9 percent, these companies are actually at risk; we hear quite often that transmission capability and the state of the power grid nationwide is a major problem. That 6.9 percent figure is a major reason why; these are publicly traded companies and with profit margins that small it becomes difficult for them to both provide dividends to their stockholders and maintain or upgrade their infrastructure out of operating revenues.

That Entergy Louisiana makes a 9.1 percent margin isn’t a bad thing. It’s a good thing. Entergy is headquartered in New Orleans. We like locally-based businesses to do well. And that 9.1 percent margin, better than the industry average, doesn’t come from Entergy gouging its customers.

Obviously not everybody in Louisiana gets power from Entergy. We’re just using them because they’re the largest operator within the PSC’s purview.

But here’s something Campbell either doesn’t know or doesn’t want you to know – Entergy might have a slighty higher profit margin than the average, but it’s because they do a good job of keeping costs down rather than soaking the customers.

Here’s a graph from ElectricChoice.com showing where Louisiana ranks among the states…

Sure, Georgia’s and Alabama’s rates are a little lower than Louisiana’s, and sure Arkansas and Tennessee have considerably lower rates. But compared to Texas and Florida, this state is doing just fine on electricity costs.

But Campbell’s idiocy didn’t stop there.

Entergy Corp. responded later Monday in a prepared statement that said utility regulators need to ensure that the “return on equity” – or ROE – is adequate enough for the companies to attract the investors needed to pay for improving the making and moving of electricity. “The ROEs allowed in Louisiana are consistent with the national average, as well as utilities in the southeast,” according to the statement released by Charlotte Cavell, an Entergy spokeswoman.

The November 2011 edition of Public Utilities Fortnightly, a trade magazine, listed the return on equity for utility companies across the country and most received 10 percent to 11 percent.

Campbell said that investors already are attracted to possibility that their money would make twice, even three times as much with a utility company than when invested in a lower yielding instrument. If the profits allowed by regulators was reduced from 10 percent to 8 percent, utilities would still offer a substantial return on equity and customers would see lower monthly bills, he said.

“They don’t have an ironclad right to make 10 to 11 percent,” Campbell said. He suggested restructuring the formula used to set rates that customers pay monthly by linking the ROE to the going prices in the financial markets.

Yahoo! Business says that the average ROE in the electric utility business is actually 7.1 percent, not 10 or 11 percent. Entergy is generating a good deal better return than that; YCharts.com says they’re running at 16.39% for Entergy Corporation as a whole, which puts the company at the very top of the food chain in terms of performance.

But that’s based on cost control, not rates – as we’ve shown (at least in Louisiana).

Who is Campbell to demand that power companies make do with eight percent ROE? He says eight percent is fair because mortgage rates are only 3.5 percent, as though that has any relevance at all.

It’s good that Campbell has little if any relevance at all. But the time is coming when the voters of PSC District 5, which encompasses most of North Louisiana, should make him thoroughly irrelevant.

Campbell’s current six-year term as a Public Service Commissioner expires in 2014. Somebody of quality needs to run against this guy, and when they do they need to be heavily funded. The 2014 election cycle in Louisiana affords Louisianans the opportunity to clean Campbell and Mary Landrieu out of elected office, and both are long overdue for defeat.

Interested in more national news? We've got you covered! See More National News
Previous Article We’re On The Verge Of A Long-Term Energy Boom
Next Article Save The Incandescent Bulb, Screw The Planet