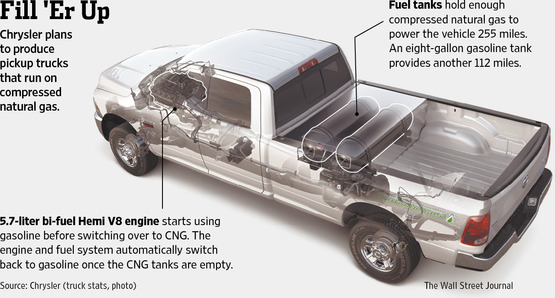 How much faster might this have happened if the Feds hadn’t forced their car company to waste our tax dollars on the Chevy Volt?

General Motors announced today it will offer bi-fuel versions of its 2013 Chevrolet Silverado and GMC Sierra pickup trucks that run either on gasoline or natural gas.

The two trucks are the 2500 HD (heavy duty) model, and can be ordered in rear-wheel or four-wheel drive and with a standard or long bed.

The pickups are fitted with a 6.0-liter V-8 engine that is modified to switch seamlessly between burning compressed natural gas, or CNG, and gasoline.

There are a few items in the linked story worth passing along.

First, GM said in today’s rollout that they went with a bi-fuel option on the Silverados and Sierras out of a fear that customers would shy away from full-on NGV’s (natural gas vehicles) out of concerns about the number of filling stations carrying CNG. That’s a smart move, because we’re stuck with a chicken-and-egg problem in the promotion of natural gas as a transportation fuel. There aren’t enough NGV’s, so there isn’t enough demand to drive the introduction of filling stations – and without enough infrastructure there won’t be more NGV’s on the road.

So if you’re GM and you want to introduce NGV’s to the market – in recognition that natural gas is the future of transportation fuels in a way that the Chevy Volt never will be – then you’ve got to do two things. First, making your offerings flexible enough to still fit into the current gasoline-based infrastructure and second, focusing on pickup trucks, and heavy-duty ones at that.

Because with heavy-duty pickups, you access the fleet vehicle market in a way you wouldn’t be able to do if you were selling sports cars or sedans or even SUV’s. Though SUV’s would certainly be next.

Why does the fleet vehicle market make sense? Because fleet vehicles most often fuel at a central depot, making access to CNG much less of a problem. GM will still sell these trucks on the consumer market as well, though they’re figuring the fleet market is what will drive their sales volume.

GM will build these trucks as they normally would at their plant in Fort Wayne, Indiana, then ship them to Union City, Indiana where IMPCO, a manufacturer they’ve contracted, will add the natural gas fuel tanks at the front of the trucks’ beds and put the CNG delivery system in.

There’s no indication as yet on pricing, though GM says the added cost of the natural gas system would generate a “quick return on investment.”

Here’s the issue, though – natural gas as a transportation fuel has been a huge winner over electric cars (let’s not just focus on the Chevy Volt; the federal government has wasted vast sums of money on subsidies for Fisker and Tesla as well) and ethanol for a long time; ever since the shale gas revolution began it’s become obvious that if you want to get off foreign oil running vehicles on CNG is your most cost-efficient avenue to do so.

The market would have found a way to create a role for NGV’s, probably years ago. And had it not been for three years of the Obama administration trying to force the Volt down our throats with influence bought from its extralegal bailout, we would begin seeing the future develop.

Instead, Obama led us down the disastrous electric car road, in which GM has had to shutter its production lines for the Volt due to the volume of unsold vehicles littering car lots and two high-end electric car manufacturers have soaked up scandalous amounts of federal largesse on the way to bankruptcy court.

And after GM forced itself away from the table on the volt to embrace, at least in a small way, natural gas as an alternative fuel – a decision they’re making based on the market and not on the federal government telling them what to do – we’re getting a glimpse of the future.

The Obama administration will no doubt take credit for the decisions of GM and Chrysler. But if it’s serious about admitting its failure on electric cars it will now do what it can to get the government out of the way and let the market produce the supply of CNG at the pump those vehicles require.

Because based on its track record in the vehicle market to date, the White House will most surely bumble natural gas as a transportation fuel if they attempt to drive market conditions.

Interested in more national news? We've got you covered! See More National News
Previous Article The Obama Administration’s Lies On Offshore Drilling Are Too Much Even For Mary Landrieu
Next Article CNG Isn’t The Only Way To Make Natural Gas A Transportation Fuel