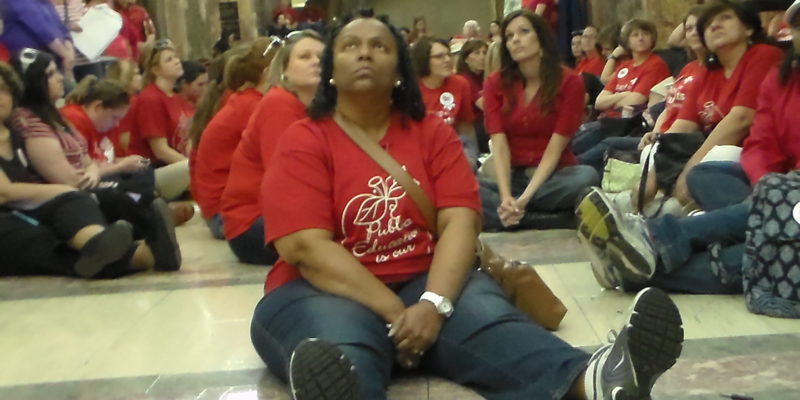 Here is more video from Louisiana Association of Educators President Joyce Haynes’ rant to teacher union protesters gathered on the steps of the Capitol yesterday. Something that was heard a lot on Wednesday and Thursday was how badly protesters were treated by not all being allowed in the building at the same time. Really?

Just so you will know, both of the committee rooms in the Louisiana House and Senate in which hearings took place were packed over the last two days, as crowds were sent into overflow rooms—which were also packed.

This is what it looked like inside the entrance to the Senate Chamber yesterday as teachers participated in a sit-in of sorts so they could watch the Senate Education Committee hearing on a television screen: 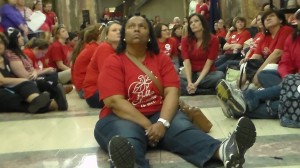 As Hanyes’ was later told when she complained to Legislatures during her testimony to the committee, it was the fire marshal who made the call to rotate protesters into the Capitol based on rules long set in place for safety reasons.

Did they really expect that a couple of thousand of demonstrators who were spurting rhetoric about flipping the governor the bird and having him recalled were all going to be ushered into the Capitol at the same time?

Those whose job it is to keep the building safe weren’t going to help facilitate a Wisconsin-type Capitol Building—not in Louisiana. Leave that kind of mess for the cheese-heads.

These protesters sense of entitlement is beyond staggering. If they demand something and you don’t give it to them—like tenure with poor performance or letting thousands into the Capitol to make trouble while important hearings are taking place—you are a dictator.

Agitators like Haynes and Rep. John Bel Edwards, who came out later to stoke the crowd with the same kind of nonsense, are obviously trying to build a narrative that Jindal and Republican Legislators who stand against the status quo are nothing more than tyrants trying to keep the people—meaning Democratic voters—down.

In truth, these protesting teachers aren’t victims. The children of Louisiana stuck in failing schools, many of which were kept home a week before LEAP test so their teachers could protest, seem to fit the description better.

Interested in more news from Louisiana? We've got you covered! See More Louisiana News
Previous Article Something To Watch For In The Next Few Days…
Next Article Supreme Court To Lower Courts: Adjudicate, Don’t Legislate