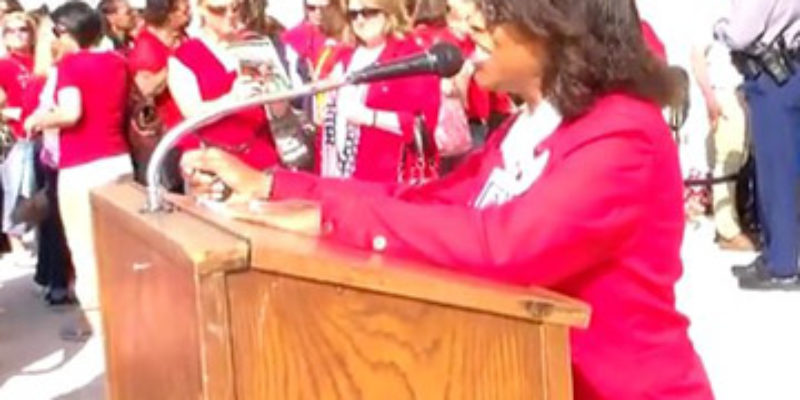 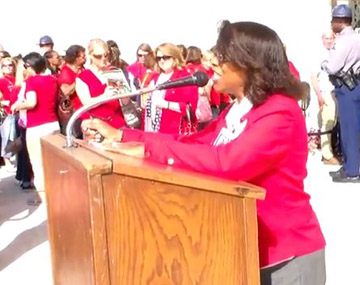 …it’s pretty rare to see the Baton Rouge Advocate, which by the grace of the Fates is about to emerge as the state’s pre-eminent daily paper thanks to Newhouse’s decision to chop the Times-Picayune down to a thrice-weekly publication, take on the teachers’ unions.

But that’s what happened yesterday when the Advocate’s Lanny Keller, a usually-reliable fan of the Democrat establishment in the state (we took him to task a while back for a goofy piece he wrote about Mary Landrieu and the Louisiana Purchase, for example), tore the Louisiana Association of Educators a new one.

If you want to learn why Gov. Bobby Jindal had such an easy time passing his education bills, listen to a presentation from one of his principal opponents: Joyce Haynes, president of the Louisiana Association of Educators.

It’s a passionate statement — her regard for hard-working teachers and genuine concern for students shines through — but too often, her argument degenerates into an exercise in excuses for schools that are among the worst in the country.

Haynes’ listeners at the Press Club at Baton Rouge recently might well have echoed Winston Churchill, as they looked at their dessert plates: This bread pudding has no theme.

It goes on from there, as Keller castigates Haynes for decrying the standardized testing Louisiana – and the rest of the country – have embraced as a system of metrics for performance in schools all over the country. He notes that Haynes makes some criticisms of the tests which are worthy of discussion, but still finds them wanting…

But some of her criticisms begin to fuzz off into feel-good language of a 1970s encounter group. Tests are anti-creativity, the children aren’t one-size-fits-all, and — if she’s pushed — Haynes careens into racial victimology. “The whole idea of young black men failing?” she said. “It starts with that standardized test.”

The third-grader failing LEAP tests “labeled as a failure,” lost for life because he’s not been taught to read, is a victim of a corporate conspiracy to earn money by operating public schools? Follow that?

If you ask her, Haynes is the first to admit that she fears she sounds too defensive about public education. “We have begged for collaboration,” she said, unconvincingly; teacher unions have the capacity to be heard, but for Haynes and others they’re steamrolled by Jindal and other self-styled reformers pushing a self-serving corporate agenda in education.

Haynes said that schools need “resources,” which is union-speak for more tax money. Jindal and many reformers airily wave aside the modest pay of teachers and the crumbling school buildings in many parishes.

Jindal is winning the debate not only politically but intellectually, even if he’s wrong.

Time will tell whether the Governor is wrong about education reform. The figures released yesterday show modest gains statewide from last year – some 68 percent of the state’s students are at or above grade level, compared to 66 percent in 2011. One could view those numbers positively and see slow but steady progress – the number at grade level when the wide-scale testing began was 45 percent, so it’s clear Louisiana’s schools have improved in the aggregate – or one could see the meager improvement as negligible and conclude Louisiana has come as far as it can without major changes to its educational delivery system.

And if one should come to such a conclusion, one might find some support in the fact that the state’s leading school district in terms of improvement from 2008 to 2012 is the Recovery School District – the bete noire of the educational establishment and the teachers’ unions, thanks to its employment of “for-profit” charter operators. The RSD has delivered a fairly astonishing 28 percent improvement in students testing at grade level and above by using all those charter schools, and primarily in Orleans Parish. Lest anyone suggest that the RSD’s charters and all those “for-profit” operators are draining the Orleans Parish schools of talent and resources, it so happens that the Orleans Parish school district spends over $14,000 per year per student and places fourth in the state at 82 percent of its students at or above grade level.

That’s evidence that the reforms Jindal is attempting to build from out of New Orleans are working. Keller didn’t have this year’s test scores, which were released yesterday afternoon, to work with in yesterday’s column – otherwise we’d expect he would have altered his conclusion.

But the piece is correct in any event. Haynes has contributed exactly nothing to the education reform debate, and she’s reduced to whining and sniveling at the Baton Rouge Press Club as her members, and those of the state’s other teachers’ union the Louisiana Federation of Teachers, waste their time in a futile effort to recall Jindal and several state legislators.

This is why we noted while the education reform package was moving through the legislature what utter sophistry was at work when Haynes and her cohorts screamed about the speed of its passage and the failure to provide the state’s citizens with an adequate debate on the subject. That package could still be in front of the legislature and Joyce Haynes wouldn’t have anything intelligent to say in opposition to it.


Interested in more news from Louisiana? We've got you covered! See More Louisiana News
Previous Article There Are Some Costs To The Reforms Being Passed This Session
Next Article HB 865 And Why Sausage Making Is Pretty Compared To Politics