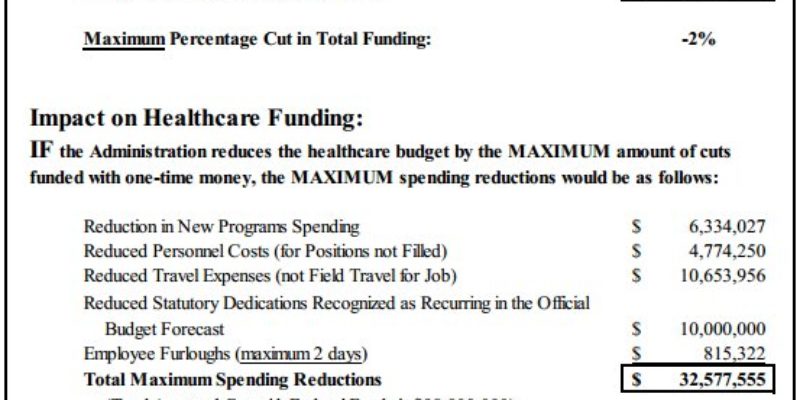 Yesterday we saw some haymakers being landed in the state’s budget battle, as state treasurer John Kennedy unloaded on Commissioner of Administration Paul Rainwater in a letter accusing him of “scaring” the higher education and health care communities about budget cuts the latter has characterized as dire for those governmental units. And the Jindal administration, including and perhaps most notably Rainwater, shot back with a letter of its own which essentially called Kennedy a clown for having presented a bunch of budgetary ideas it considers to be previously debunked.

But while Kennedy was jumping into the fray on the side of the state’s fiscal hawks, the actual soldiers in that battle – the conservatives in the House of Representatives who started the fight by amending the budget to remove the one-time money that was in it amid a donnybrook of a floor debate last week – held their fire yesterday.

That message? Quit with the Chicken Little stuff.

FISCAL CONSERVATIVES RESPOND TO SCARE TACTICS BY DIVISION OF ADMINISTRATION

BATON ROUGE, LOUISIANA—Fiscal responsibility should be more than a preached campaign promise – it should be put into practice. There is widespread misinformation on the efforts of legislators who seek fiscal responsibility on the part of state government. Fiscal conservatives in the House of Representatives worked together to pass a constitutionally mandated amendment to House Bill 1 (“the state’s annual budget”) in order to achieve that end.

In response to our attempt to do what we believe to be right by the taxpayers of Louisiana, the Division of Administration testified in a Senate committee about draconian cuts to higher education and health care in an apparent effort to pressure legislators into complying with the Administration’s budget proposals.

The conservative-sponsored amendment would remove non-recurring income (“one-time  money”) of $269 million from being spent on recurring expenses. Commissioner of  Administration Paul Rainwater testified that this would cause hundreds of millions in cuts,  primarily to higher education and health care. We seek to set the record straight.

Some of the important facts of the amendment are:

Our objective is to provide a budget that funds the state’s needs in a fiscally responsible manner within the constraints of the constitution – and with the available taxpayer revenue. We will  continue to work with the administration and the Senate to achieve this objective.

There’s a graph as well… 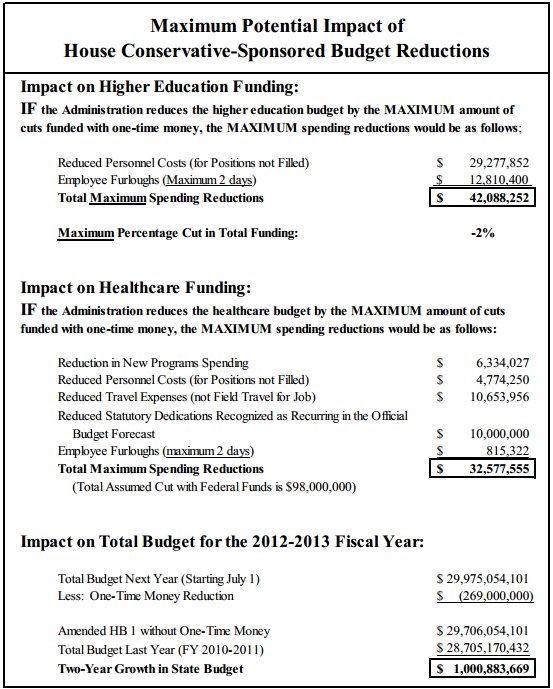 The administration is fairly likely to respond on this publicly, based on the aggressive response they threw back at Kennedy yesterday. Engaging in this debate is something they need to do, because clearly the case for using one-time money hasn’t been persuasively made yet. It certainly wasn’t made by House Appropriations Committee chairman Jim Fannin last week in a speech which combined threats and non-sequiturs in an effort to browbeat the fiscal hawks into obeisance, and Rainwater’s Senate testimony did little better.

And with Jindal’s name being consistently thrown around as a vice presidential pick, including in today’s POLITICO op-ed by Grover Norquist and Patrick Gleason of Americans for Tax Reform, this issue needs favorable resolution. After all, Norquist and Gleason included this as part of their endorsement of Jindal as Mitt Romney’s prospective veep…

If Romney wanted to provide voters with a clear choice on tax policy, he would be hard-pressed to do better than add Jindal, one of 13 governors committed to not raising taxes, to his ticket.

While the president’s budget entails historically high levels of spending and taxation, it’s also noteworthy because it never balances during any time window. Jindal has balanced a budget every year as governor and never resorted to higher taxes.

You really can’t make it stick that you’ve balanced the budget every year when you’re using one-time money and drawing down the rainy-day fund to do it while you’re crossing your fingers that revenues will eventually catch up to expenses. And now that Norquist and Gleason have said it, the claim of a balanced budget – which almost every state has to have based on its constitution and almost half of them have done even in this lean year without having to search under the seat cushions for spare change – is going to get some pretty unwelcome scrutiny if the fiscal hawks are still screeching when all this is over.

But as John Maginnis noted in his column this week, Jindal has the votes in the Senate to get the budget he wants out of that body, and unless the House conservatives are willing to wreck this session by voting the final budget down, which will put Jindal in the midst of a special legislative session on the budget at the precise moment his name starts being seriously considered for the VP job, he’s going to get to use that one-time money again.

The question is what the cost will be – to the state, to Jindal, to the Louisiana Republican Party, to the conservative movement.