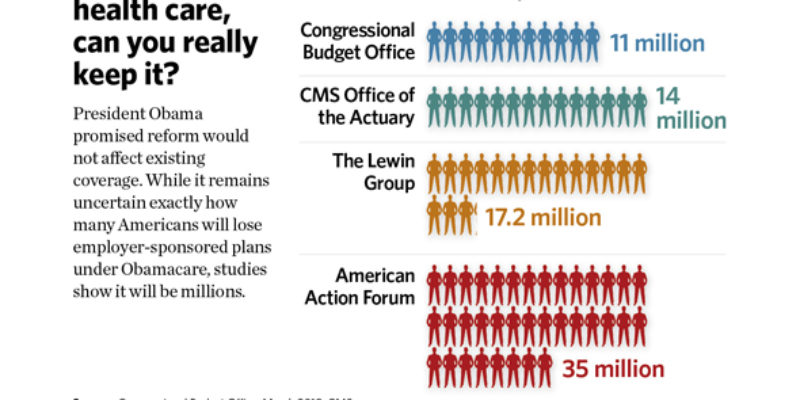 Those of you who have been keeping up—and even the most brain-dead who haven’t— must realize by now that our president has a bit of a problem telling the truth. If you are tallying the Obamacare lies, this one was number 6,487:

To be honest, I don’t really know how many whoppers Obama has told about his healthcare reform, but a new report released by the House Ways and Means Committee reveals that employers will be shelling out an average of $6,487 per-employee after taxes for  company health insurance plans by 2014—when Obamacare is fully implemented.

Actually, companies won’t be paying that since those who are concerned more about their bottom line —all of them, eventually—will simply cancel heath insurance plans and dump employees into Obamacare mandated exchanges paid for with tax dollars. There is a $2,000 per-worker penalty for companies with more than 50 employs to do so, which means they will save an average of $4,487 by putting a worker on the government dole. They will do so.

Using information provided by 71 fortune 500 companies, the study concludes that businesses could save $28.6 billion in 2014 by dropping  health insurance plans, even after paying the federal penalty.

During Obamacare’s first 10 years, at least $422.2 billion would be saved. Probably more as the cost of company healthcare plans increase under new federal laws—as they are already starting to do.

Depending on who’s counting, 11 million to 30 million Americans would lose their company healthcare policies if the U.S. Supreme Court doesn’t rule Obamacare unconstitutional or unless we elect a new president who would work to get the law repealed: 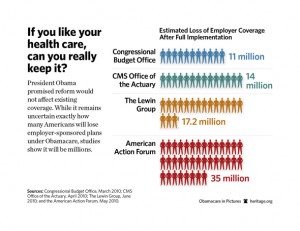 The reason that “If you like your doctor or healthcare plan you can keep it,” was such an obvious lie from the get-go is that it’s based on a false premise—that most American’s make direct decisions about their health insurance.

In reality, the majority of Americans that benefit from private health insurance do so through an employer provided Health Maintenance Organization (HMO).

Companies use HMOs to draw better employees, which helps them. When the cost-benefit pendulum swings in the other direction, businesses will send out letters to workers telling them that they will no longer have an HMO plan.

Employees will be told not to worry because they will still get medical benefits through the government and that this is being done to cut back on expenses so people won’t have to be laid off.

It will be a “win-win” for everyone, only not really.

This bring us to Obamacare lie number—aw, who’s really got time to count? Obama has tried to sell Americans on socialized medical care by telling us that it wouldn’t mean rationing. Like his claim that Obamacare would not mean Americans would be forced to lose their existing healthcare coverage, this just ain’t true.

Democrats, especially, the president know this:

The president might be able to lower sea levels and all, but I doubt that even he is capable of  of changed the basic law of economics—when you have less money to pay for more stuff, you have to ration.

In Louisiana alone, estimates are that 233,000 people now receiving private insurance through HMO’s or paying out-of-pocket will be added to the state Medicaid roles, costing $7 billion over the next ten years. Services will have to scaled back and some will be cut off completely. Louisiana just doesn’t have the money.

Let’s put it in terms that, hopefully, the even a sleep-walking Obama zombie voter should be able to grasp:

Since I can’t afford to feed every dog in the neighborhood, the portions that I put out are a lot less than they were when I first started feeding the hounds.  There are more bowls out, but there is less food in each. Furthermore, I’m leaving out cheap dog food for the strays, not the good stuff that my dog gets—she’s kind of like a member of Congress in this analogy. She gets top quality dog chow separate from the mongrel masses.

The president, of course, is aware that socialized medicine leads to rationing, so he just heartless? Not the way he sees it.

It doesn’t matter if healthcare quality drops, as long as everyone has the same crappy healthcare. Creating programs to level the playing field to make everyone equally miserable gives socialists like Obama a warm feeling. Unfortunately, it will mean a sharp decline in healthcare quality for millions of Americans who now get their coverage through their jobs.

If government bureaucrats calling the shots believe that it’s too costly to cover certain people who are a drag on the collective, they won’t be helped at all.

If dolling out doggy chow gets too costly for me, I’m going to call the city to see about getting some of them off my property or just invite Obama over for dinner—the “Doggy Death Panel” option.


Interested in more national news? We've got you covered! See More National News
Previous Article The Muslim Brotherhood In America
Next Article The Life (And Death) of Julia