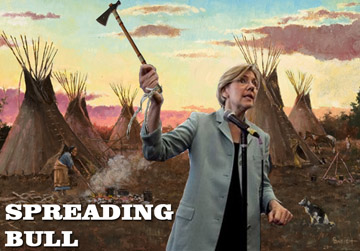 With all the controversy concerning Elizabeth Warren lying on her resume’ when stating she was of Native American ancestry; I (as a member of a Federally NON-recognized tribal nation in New England) must chuckle. It’s ironic an Indian can’t be an Indian in this country without the Caucasian establishment (as represented in the Department of the Interior de facto controller of the Bureau of Indian Affairs [BIA]), any Caucasian liberal idiot with a college degree and high cheekbones can be Indian by declaration on a job application.

Those high cheekbones she so proudly used to authenticate her claim to Native status are no more than a recognizable faux-pas of a crypto-racist. Her blonde hair and blue eyes make her more readily recognizable as a daughter of LOKI, the Norse God of Mischief than as a female member of a Nation, Tribe or Clan recognized by other Native people. This shows the reality of her personal character.

The Injun Princess is a position reserved in Native culture for those with particular quirks in their ancestry. The quirk is defined as to whether the Princess has any knowledge of her REAL father. The question’s academic. It always arises as a person (upon finding themselves speaking to a true Native) makes the statement they’re Native and that eons ago, their genetically challenged ancestor was an Indian Princess married to (and thus legitimized) a white settler she met in the bushes at Plymouth Rock, Jamestown, Hispaniola etc.

Warren entered the race for Senator from the State of Massachusetts. She’s been exposed as using her questionable ancestry to garner praise for her rising above the impediment of her racial history. She’s been lauded as Harvard Law School’s “first woman of color,” in 1997. This all gave the impression Harvard was a diverse and “with it” school at the cutting edge of social justice and affirmative action.

In a piece authored by Laura Padilla of the Fordham Law Review (1997) it was stated: “there are few women of color who hold important positions in the academy, Fortune 500 companies, or other prominent fields or industries,” the piece says. “This is not inconsequential. Diversifying these arenas, in part by adding qualified women of color to their ranks, remains important for many reasons. For one, there are scant women of color as role models. In my three years at Stanford Law School, there were no professors who were women of color. Harvard Law School hired its first woman of color, Elizabeth Warren, in 1995.” (Burns and Haberman-Politico 2012)

Who receives the most benefit from her reciting her family’s “Native American folklore” and insinuating it into her resume? Squaw Warren of course. Though Warren says she had no idea Harvard was capitalizing on her Native status and the notoriety it provided them, it must be remembered she’s on the Titanic (metaphorically speaking) and she’s bailing like a son-of-a-gun trying to cover the mess.

Liz? Water doesn’t cover sewage. It just keeps it floating so you can see where it’s at. It was still visible in 1995 when she described herself as a “minority” in law professors’ directories. She said she was trying to meet new and influential people; an ancient form of networking like Facebook or LinkedIn

Politicians would never lie would they?

This writer’s protestant chuckling comes from the first paragraph: “…I (as a member of a Federally NON-recognized tribal nation in New England) have to chuckle. It’s ironic an Indian can’t be an Indian in this country without the Caucasian establishment (as represented in the Department of the Interior de facto controller of the Bureau of Indian Affairs), any liberal, Caucasian idiot with a college degree and high cheekbones can be Indian by declaration on a job application.”

The BIA has standards for people requesting Federal recognition as an autonomous and sovereign nation in America. It’s demanded, demanding and demeaning all at the same time to have to PROVE to white folk you’re “for real” Indians. It’s especially so when you see all you really need to be an Indian is to say so while campaigning for high office.