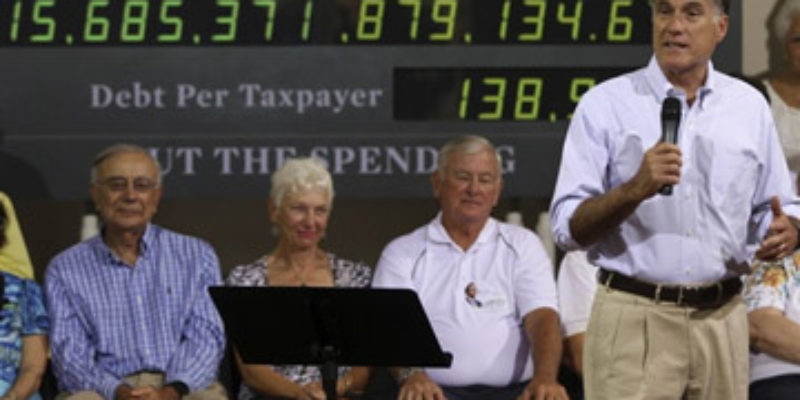 And then today, Romney is down in Florida giving a speech, and look what’s in the background?

Mitt Romney continued to drive a debt-oriented message here on Wednesday morning, extending his “prairie fire” of debt metaphor with the assistance of a prop.

In a nod to the independent voters who pushed the Sunshine State into the Democratic column in 2008, Romney noted that both parties were responsible for pushing the debt to the “incomprehensible” levels – which were represented on a giant prop debt clock behind him.

“There was another area during [President Obama’s] campaign, he said he would focus on. You see, he was very critical of his predecessor for the debts his predecessor put in place. And sure it’s true you can’t blame one party or the other for all the debts this country has, because both parties in my opinion have spent too much and borrowed too much when they were in power,” Romney said in this key swing state.

Romney should absolutely push the debt. Obama can’t win that argument. He’s avoided that argument for three years and refused to engage the public on it. He’s lied through his teeth about what it will take to fix it, he’s refused to present a credible budget – he can’t get so much as a single vote for his proposals in either the House or Senate – and he’s wasted our air with insipid crap about the Buffet Rule and evil oil companies getting tax breaks.

Obama hasn’t done his job the entire time he’s been president. He ought to be thrown out on his ass for that fact in and of itself, and people will understand that.

So yeah, Romney should be carrying that debt clock around at every speech he gives. Miller is precisely right about that. And while there are people howling today about this Super PAC-Jeremiah Wright business, and accusing Romney of being the second coming of John McCain because he doesn’t want to run his campaign on Jeremiah Wright, those folks need to understand that Romney’s sweet spot isn’t on Jeremiah Wright or even Bill Ayers. And while Romney should signal to Obama that whatever distraction the president wants to throw in his path to distract from debts, deficits and bad fiscal and economic policies will be answered with ruthless vigor, as he’s been doing, those things are secondary. They’re not the sweet spot either.

No, his sweet spot is those numbers on that clock, adding up at lightning speed. He can win the election on that alone, and what’s more he can get some coattails behind him and end up with a friendly Senate.

And if that clock is a mainstay on the Romney campaign roadshow, it might be that Miller planted the idea for it.


Interested in more national news? We've got you covered! See More National News
Previous Article You Want It Shaken, Or Stirred?
Next Article Day One?