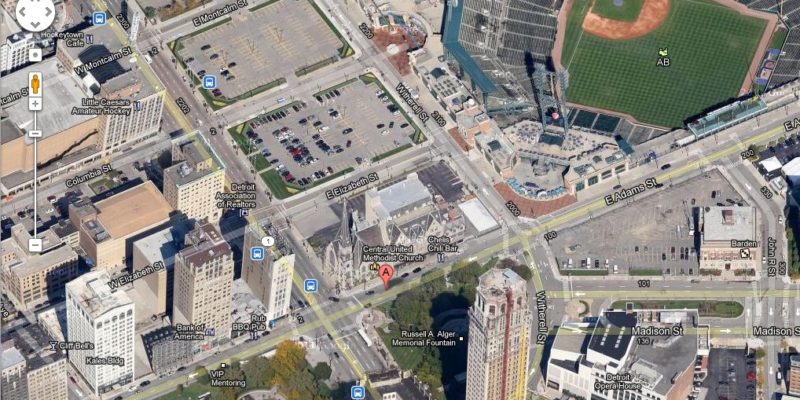 From Ben Shapiro at Breitbart comes a downright weird story:

The Michigan Welfare Rights Organization (MWRO), headed by Maureen Taylor, has been telling Detroit welfare recipients to occupy foreclosed homes around the city. “You can’t imagine,” Taylor told WWJ in Detroit, “when we get to work at 9 and 10 in the morning, there are 20 to 30 people in the hallway talking about ‘I don’t have any more money, my rent is due’ – three or four months behind – what can I do? And its unreal, because we don’t have answers except to say, ‘here’s a list of houses that we have intercepted that have been repossessed by banks, pick one and move in.’” To boot these trespassers out of the homes, banks are forced to take MWRO to court.

Shapiro calls this communism, and he isn’t wrong.

What I took from this was that the MWRO people don’t get to the office until nine o’clock.

Which means there’s a lot of time one morning for some enterprising entrepreneur short on office space to simply break in, take up residence at the MWRO’s offices, have a locksmith come and change the locks and tell Maureen Taylor and her flunkies to get the hell away from the door they’re knocking on. Displaying a weapon or two in the process? So be it – it’s a dog-eat-dog world, after all.

Exactly what are these people going to say? That somebody is stealing from them? That would be rich.

Go to MWRO’s web site and on the front page you’ll find a reference to a 2009 effort they spearheaded to stop the water company in Detroit from shutting off water to people who don’t pay their bills. Complete with a def poetry jam YouTube called Water Warriors by “comrade William Copeland!” Put yo’ hands togetha…

You’ll also find this on that site. It’s their mission statement:

“We, the poor and working people living in America refuse to accept responsibility or blame directed toward us and imposed on our children for the poverty we are forced to live in. As members of the National Welfare Rights Union and the Michigan Welfare Rights Organization, we recognize high-tech manufacturing as the dawn of a complete new era which can guarantee forever and for all a life free from material wants. Therefore, in order to cleanse this imperfect nation, re-establish justice, ensure economic stability, provide for the common security, promote the national welfare, and enhance the blessings of financial freedom once enjoyed by the collective posterity, we do re-dedicate and re-establish our singular commitment to take control of our nation as patriots as we fight for the American Dream.”

Something tells me if you asked MWRO’s membership – Annual dues are only $30 for low-income people, and $35 for all others; what a deal! – how to spell “patriot,” you’d get lots of different permutations in result. I could be wrong.

But before our readers assume that MWRO’s offices have to be a dump that couldn’t possibly be worth locating a squatter-business in, this doesn’t look all that bad. 23 East Adams Street is a block away from Comerica Park. Happy Hour at the ball park! From a screen shot of Google Maps… 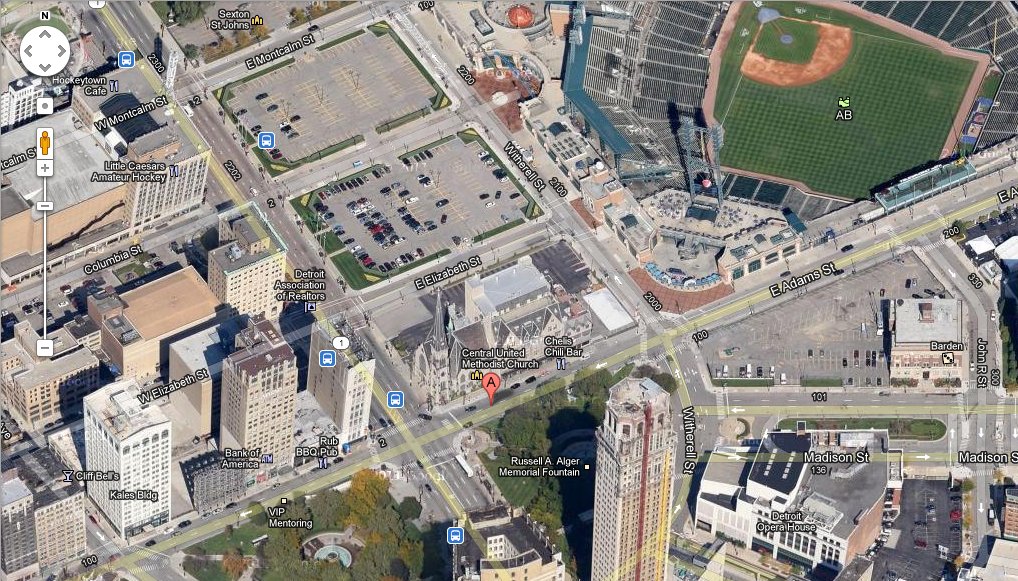 An idyllic locale, for certain. MWRO is on the fourth floor of the building that houses Central United Methodist Church, which is something of a problem – if you do an office invasion there you could possibly be stirring up a hornet’s nest.

What kind of sermons do they have at that church, do ya think? Any chance they talk about the 7th Commandment there?

How does that one go? Let me think…

Oh yeah. Thou Shalt Not Steal.

And yet they’re running a community organizing group out of that church which is telling people to steal a house which has been foreclosed because the last guy in there didn’t pay the mortgage.

Guess what else operates out of that church. From DiscoverTheNetworks.org…

The National Welfare Rights Union (NWRU) describes itself as “an organization of, by, and for the poor in the United States and beyond.” Its aim is to build “a social movement committed to ending poverty” and promoting “unity among low-income, public assistance recipients and the unemployed.”

A reincarnation of the National Welfare Rights Organization (defunct since 1975), NWRU was founded on June 30, 1987. This was the 21st anniversary of the day commonly regarded as the welfare-rights movement’s “birthday” in 1966, when major demonstrations had taken place simultaneously in 16 U.S. cities. Today, NWRU has numerous chapters across the United States and maintains affiliations with other anti-poverty groups abroad.

On August 31, 2008, NWRU published its “Eight Position Points to Dismantle Poverty in the U.S.,” which included the following:

(1) A Guaranteed Annual Income: “All residents of the U.S. will be eligible for a guaranteed annual income to protect them from falling below the poverty level.”

(2) Universal Health Care with a Single-Payee: “All residents will be eligible for a single-payee health care system funded by the federal government. We oppose private insurance that profits off of the medical conditions of low-income, uninsured people.”

(3) Nationalization of Child Care: “All children should be eligible for free, quality child care. We also support a living wage for child care providers.”

(4) Nationalization of Education, Including the Headstart Program: “All residents will be entitled to education from birth to death. The Headstart Program must be preserved, funding must be increased, and eligibility should be expanded.”

(5) Nationalization of Utilities: “All utilities including electricity, natural gas, heating fuels, water, alternative energy, and communications should be properties of the public domain and not subject to privatization. All forms of communication, such as telephones and Internet access, should be included.”

(6) Nationalization of Housing: “Everyone has a right to a home. It is the duty of the government to provide affordable housing for all residents, and [to] provide periodic maintenance and upgrades.”

(7) Nationalization of Public Mass Transit: “All forms of mass, rapid transit should be fully accessible (including to those with physical disabilities) and affordable to all residents in communities across the country.”

(8) Troop Withdrawal from Iraq, Afghanistan, and No New Deployments: “The Iraq and Afghanistan wars have depleted the American economy with no end in sight. Poor people have disproportionately suffered from the last eight years of these costly deployments physically, emotionally, and financially.”

As of January 2011, one of NWRU’s co-presidents was Marian Kramer, an activist who in 1968-69 helped organize the Revolutionary Union Movement in Detroit’s automobile plants. In 1998 Kramer endorsed a proposal to form a Black Radical Congress, which called for “a new militancy” among African Americans who “hate what capitalism has done to our community.”

NWRU’s other other co-president as of January 2011, Cheri Honkala, has told welfare recipients that they should feel “ashamed” of America’s mistreatment of the poor; she also is an admirer of Fidel Castro.

In other words, this is a successor organization to the one Richard Cloward and Frances Fox Piven established in an effort to destroy the capitalist system back in the 1960’s. The National Welfare Rights Organization was formed to sign up as many people for welfare as possible, and it did just that. In fact, NWRO signed up so many people in New York City that by 1975 they’d precipitated a financial crisis which bankrupted the city and helped lead to the rise of the modern conservative movement to political power by 1980.  In fact, from 1965 to 1974 the number of single-parent households on welfare soared from 4.3 million to 10.8 million, despite mostly flush economic times. By the early 1970s, one person was on the welfare rolls in New York City for every two working in the city’s private economy.

These people aren’t as bright as the ones who broke New York City. Then again, the Left has all but wiped out Detroit – and while Taylor, Kramer and Honkala are small potatoes operators, put enough of their ilk together and it’s more than sufficient to run off every productive citizen in sight.

Gotta give Honkala credit, though. Despite having been arrested more than 200 times, she ran for sheriff in Philadelphia last year on the Green Party ticket – on a platform which included refusing to allow deputies to enforce evictions. And the Philadelphia chapter of the National Organization for Women endorsed her – big-time mainstream group that is, did you know.

She got seven percent.

Why do we care about these clowns? We don’t. But it is somewhat entertaining to find a group so brazen as to actively be touting a plan to tell people to steal.

Most of the time they try to be a bit more subtle and sophisticated. Or at least wear masks and brandish weapons.

Ayn Rand – who would call these people moochers and looters – comes to mind. And this in particular:

“If you ask me to name the proudest distinction of Americans, I would choose – because it contains all the others – the fact that they were the people who created the phrase ‘to make money’. No other language or nation had ever used these words before; men had always thought of wealth as a static quantity – to be seized, begged, inherited, shared, looted, or obtained as a favor. Americans were the first to understand that wealth has to be created. The words ‘to make money’ hold the essence of human morality.

“Yet these were the words for which Americans were denounced by the rotted cultures of the looters’ continents. Now the looters’ credo has brought you to regard your proudest achievements as a hallmark of shame, your prosperity as guilt, your greatest men, the industrialists, as blackguards, and your magnificent factories as the product and property of muscular labor, the labor of whip-driven slaves, like the pyramids of Egypt. The rotter who simpers that he sees no difference between the power of the dollar and the power of the whip, ought to learn the difference on his own hide – as, I think, he will.

“Until and unless you discover that money is the root of all good, you ask for your own destruction. When money ceases to be the tool by which men deal with one another, then men become the tools of men. Blood, whips and guns – or dollars. Take your choice – there is no other – and your time is running out.”


Interested in more national news? We've got you covered! See More National News
Previous Article For Obama’s Backers, The Thrill Is Gone
Next Article Unmasking The Man Behind The Obama Myth…