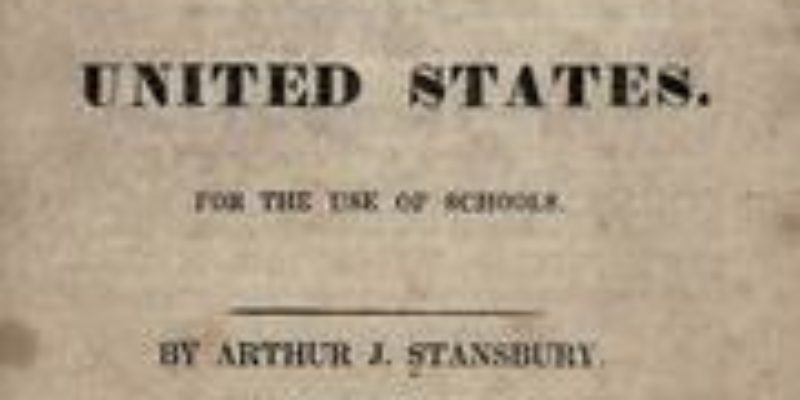 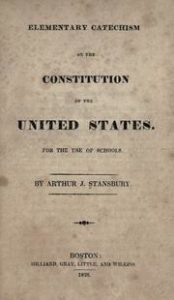 Maybe it’s because school kids don’t read things like “An Elementary Catechism On The Constitution of The United States,” anymore.

It was penned by Arthur J. Stansbury in 1828 and was taught in American schools throughout most of the 19th Century.

Stansbury reasoned that if the American experiment in self-government was going to succeed people had to be educated about the Constitution, American History and the classic liberal thought that our nation was founded on.

He felt that such an education was lacking even in his times and came up with a simple 332 question-and-answer text to help create a smarter electorate.

“That a people living under a free government which they have themselves originated should be well acquainted with the instrument which contains it, needs not to be proved.

Were the system, indeed, very cumbrous and extensive, running into minute detail, and hard to be retained in the memory, even this would be no good reason why pains should not be taken to understand and to imprint it upon the mind. When its principles are simple, its features plain and obvious, and its brevity surpassing all example, it is certainly a most reprehensible negligence to remain in ignorance of it.

Yet, how small a portion of the citizens of this republic have even a tolerable acquaintance
with their own Constitution? It has appeared to the author of the following sheets thai
this culpable want of acquaintance with what is of such deep interest to us all, is to be traced
to the omission of an important part of what ought to be an American education, viz. the
study of the civil institutions of our country.

We prize them, it is true, and are quite enough in the habit of boasting about them. Would it not be well to teach their elements to those whose best inheritance they are?”

The answer to the rhetorical questions at the end of this segment from Stansbury’s preface to the first edition is, of course, “yes.” That ain’t what we are doing these days, however. The book was phased out of American schools during the Progressive Era–about 100 years ago.

About a century before Franklin Roosevelt was creating the New Deal in the 1930’s, Frenchman Alexis de Tocqueville was roaming the United States to see what made it tic and was impressed about how even school children seemed to grasp the concepts of liberty—thanks, in part, to Stansbury’s book:

Fast forward to our times and we find we an electorate like this, which put Obama in office in 2008:

Our current president is the manifestation of a century’s worth of educators failing to pass on the basic concepts—even teaching against them—that were outlined in Stansbury’s book.

It’s high-time that we reversed that course. As a side project, I’m working on updating “An Elementary Catechism On The Constitution of The United States,” for our times. While there are universal principles in the book that don’t need to be changed there are somethings that do—like the president’s salary being set at $20,000 and Senators being chosen by state Legislatures during that time.

I don’t know how long it will take me with other commitments, but when I’m done with the book  I plan to make it free for download on the Internet for anyone who wants to use it as a teaching tool for today’s school kids.

We need it now more than ever.

Interested in more national news? We've got you covered! See More National News
Previous Article This Is About The Size Of It
Next Article Jarvis DeBerry’s Predictably Stupid Column Attacking The 2nd Amendment