Remember Jack Lalanne, the old guy who spent his winter years doing push ups on daytime television shows and selling juicers on nighttime infomericals while telling us that even geezers can live an active, healthy life?

He passed away last year at 96, but might still be with us if he had included food stamps in his workout regiment.

At least that’s what might be inferred from a radio ads that the USDA is currently running, encouraging senior citizens to sign up for government assistance so they can keep up with those “little bundles of energy” grand-yungins:

These ads have apparently been running for weeks, but I didn’t hear about them until this morning.

There are a lot of people who have fallen on hard times—old and young– in the Obama presidency who might indeed need food stamps. The U.S. Department of Agriculture reports that over 44 million Americans are using them these days—the largest number ever.

It goes without saying that when most of us in this state are standing in line at Walmart behind someone using a Louisiana Purchase card to buy groceries, they generally aren’t loading up on granola bars and tofu. I doubt many of them could outdo Lalanne in push-ups—even now—from what I’ve seen.

It’s hard for me to begrudge people in need who temporarily use the food stamp safety-net to feed their families, if they do so responsibly.

But to hear an ad with a couple of old gals sitting around giggling over being on the government dole sounding like they are trading beauty secrets that keep “Margie” looking amazing is amazing in itself. Have we really gotten his bad? Yeah, I guess we have. 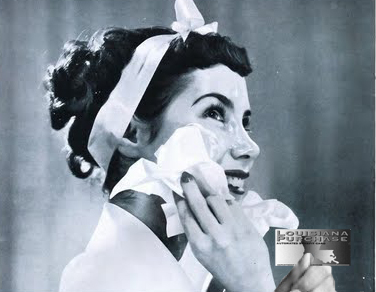