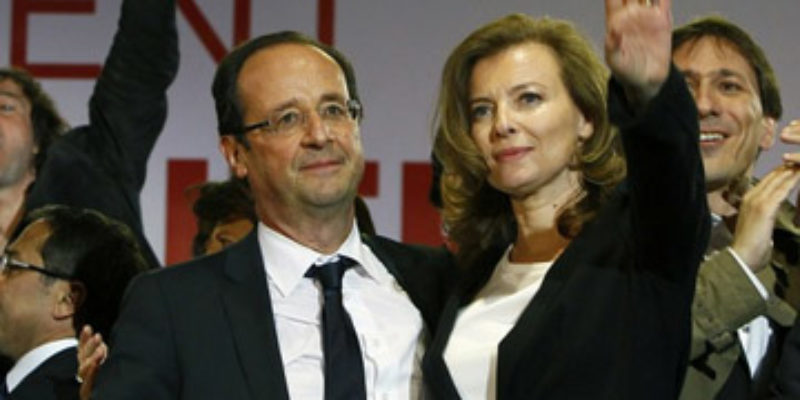 Go visit the place soon, if you’re going. In three years there won’t be anything left. French society has completely crumbled, and it’s just a matter of time before the Muslims take the place over.

This is what those people elected earlier this year…

France’s new first lady hasn’t been at her post for long, but already, she’s causing a stir. Valérie Trierweiler, a journalist with the French magazine Paris Match, ascended to the public role when her companion, Francois Hollande, was elected president earlier this year.

The avid Twitter user posted a statement of support to Olivier Falorni, the candidate running against her husband’s ex, Ségolène Royal, in western France. The message caused a frenzy. To break down why, please bear with us: It’s a little complicated and a lot French.

Francois Hollande used to live with Ségolène Royal, a socialist politician who is the mother to his four children. The two never married. Trierweiler, a divorced mother of three, has been with Hollande since his relationship to Royal ended. The two also remain unmarried. Trierweiler and Royal aren’t exactly buddies. The 58-year-old Royal was devastated when after 30 years, Hollande left her for the 47-year-old Trierweiler in 2007.

Hollande, for the record, has given his support to Royal, his baby mama, for the contest in La Rochelle. The socialist party, in fact, asked Falorni to get out of the race to improve Royal’s chances. He refused. Failure for Royal to win the election may keep her out of the national assembly.

Some suggested the tweet was the catty swipe of a jealous lover. A senior presidential aide told the French newspaper Le Monde,”I am completely blown away. I expected a government crisis, not a domestic one. It’s amazing.”

Trierweiler has reportedly stood by her tweet. But maybe it’s not as French as we thought. As a writer at the Guardian described the catfight: “From now  on, it’s ‘Dallas’ at the [presidential palace] Elysée.”

Hollande’s actual governance is no better. This is a leader who, after all, kicked off his presidency by bumping the retirement age down from 62 to 60 amid a mountain of government debt. And the French voters are set to reward him with a parliament dominated by socialists and other lefties.

There won’t be anything left of that country in 36 months. Culturally, politically, fiscally, economically, France is ruined.

Previous French governments have ruined the country before, and it’s always been a lost war which served as a reset button. But they’ve had a reset button in the past. Now? It won’t be the Kaiser or the Nazis rolling in to sweep away the old governing structure and the Brits and Americans coming in to save the day; this time it’s going to be the Muslims taking France over from within. And there is no savior on the horizon.

There is certainly no Charles Martel. When you’ve gone from Charles Martel to Francois Hollande and his brood of illegitimate children and even more illegitimate policies as your definition of national leadership, you can pack it in.