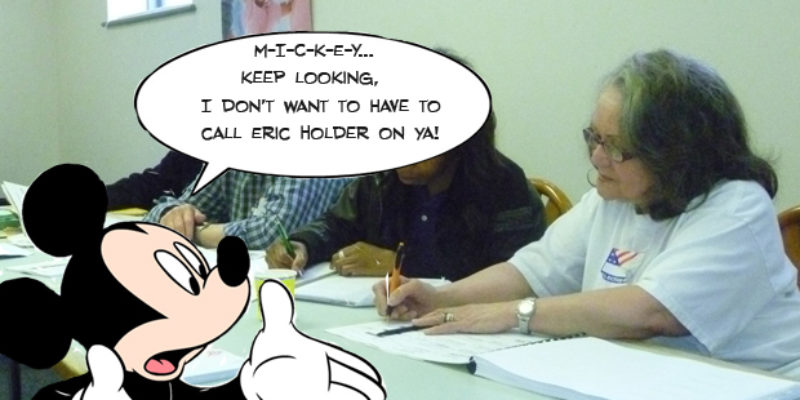 Why should it matter if we have dead people, convicted felons, non-citizens or even Mickey Mouse on voter rolls, as long as we are able to count electoral votes in swing states like Florida for Barack Obama when ballots are tallied in November?

Yeah, if you haven’t heard, Mickey was registered to vote in Florida: 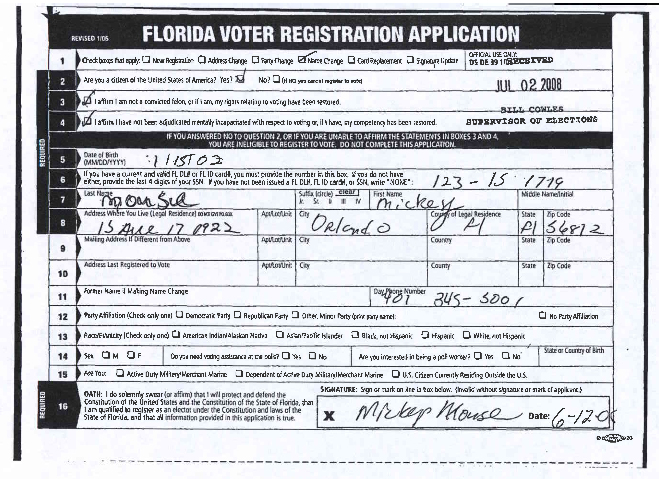 In the latest example of the Obama Administration’s battle to make sure every fraudulent vote is counted, we have the stage set for dueling lawsuits over Florida’s efforts to purge its voter roles of people who might not be U.S. citizens or maybe a little too dead or cartoony to vote.

On Monday, the U.S. Justice Department—that stalwart of integrity and transparency-–fired off a letter to Secretary of State Ken Detzner warning that a counter lawsuit against Florida is eminent because the state is suing the federal government for not giving access to data bases that would help verify the citizenship of voters:

There are big problems with voter rolls in Florida, as there are in many states.

In the Sunshine State’s case, 53,000 dead people were recently found to be registered voters after the state Legislator passed a law requiring that voter registration be checked against the Social Security Death Index (SSDI).

Three Florida counties had more registered voters than there were living people who were eligible to vote. And do the dead actually vote? Ask the state of Mississippi, where an NAACP executive was convicted on 10 counts of voter fraud, including casting ballots of dead people who were still on voter rolls. Incidentally, the NAACP has been among the loudest supporters of the Obama Administration using the Justice Department to shutdown state’s photo voter ID laws.

Large numbers of convicted felons, about 7,000, have also been discovered to be registered voters in Florida and you can guess which party they are likely to pull levers for.

Subsequently, a comparison of driver’s license records with voter registration revealed that as many as 182,000 registered voters in Florida might not be U.S. Citizens. To better verify who is a citizens and who isn’t, Florida officials asked to see to the Department of Homeland Security’s immigration database and were refused.

Florida sued for the database and now the federal government will sue Florida, saying the state is in violation of federal voting laws and that its effort to protect the process unfairly targets Latinos—with dead Latino convict cartoon characters, I guess, in greatest danger of being disenfranchised.

The Obama DOJ’s continuing fight to strip away anything states are trying to do to make sure that people voting are actually eligible to vote in order to keep the president in office might be the most transparent thing about a department that is fighting tooth-and-nail to hide documents on its illegal Fast and Furious gun running operation and is investigating itself (yeah, right) over White House security leaks.

Ask yourselves this simple question: Could you have imagined in less than three years the DOJ of an administration that promised to be the most ethical and transparent in American history would be mired in defending itself in so much illegality while simultaneously attacking states trying to enforce laws protecting the ballot process and to enforce immigration laws?

Sadly, there are are many of us that could have predicted this, which is why we were beating a drum four years ago to not put Obama in office. Hopefully, there are enough people who have woken up to exactly who Obama is by now that we won’t get a second term. That could be why the White House is pulling out all the stops to make sure that every illegal immigrant, convict, dead person and Mickey Mouse will be given the chance to vote for Obama in November… 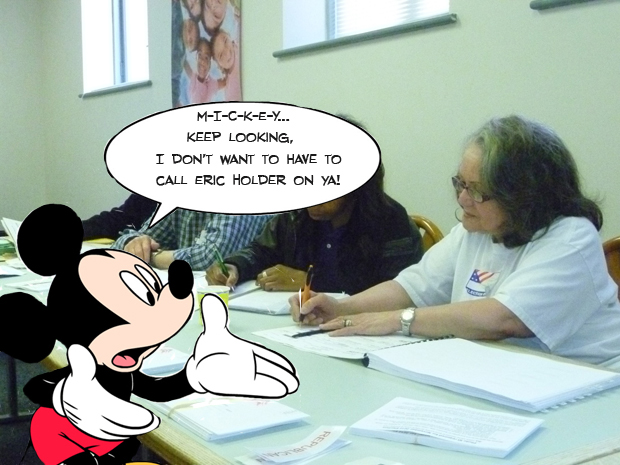 Interested in more national news? We've got you covered! See More National News
Previous Article Gaffe Vs. Gaff
Next Article If This Wasn’t Actually An Obama Ad, It Would Be An Outrage – Right?