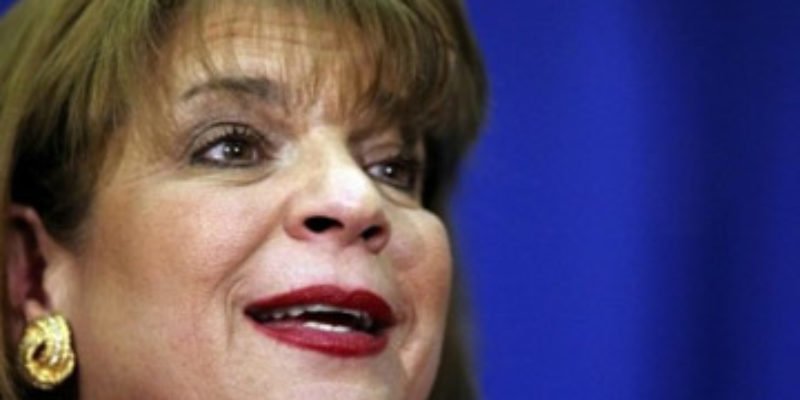 Rick Scott has a lot to answer for in appointing this fruitcake as a special prosecutor in the Zimmerman/Trayvon Martin case. Apparently, after Harvard professor Alan Dershowitz opined that the affidavit from which the current court second-degree murder trial has originated was flawed Angela Corey called his employer and engaged in a 40-minute rant complete with threats of lawsuits.

State Attorney Angela Corey, the prosecutor in the George Zimmerman case, recently called the Dean of Harvard Law School to complain about my criticism of some of her actions.

She was transferred to the Office of Communications and proceeded to engage in a 40-minute rant, during which she threatened to sue Harvard Law School, to try to get me disciplined by the Bar Association and to file charges against me for libel and slander.

State Attorney Angela Corey, the prosecutor in the George Zimmerman case, recently called the Dean of Harvard Law School to complain about my criticism of some of her actions.

She was transferred to the Office of Communications and proceeded to engage in a 40-minute rant, during which she threatened to sue Harvard Law School, to try to get me disciplined by the Bar Association and to file charges against me for libel and slander.

She said that because I work for Harvard and am identified as a professor she had the right to sue Harvard.

When the communications official explained to her that I have a right to express my opinion as “a matter of academic freedom,” and that Harvard has no control over what I say, she did not seem to understand.

She persisted in her nonstop whining, claiming that she is prohibited from responding to my attacks by the rules of professional responsibility — without mentioning that she has repeatedly held her own press conferences and made public statements throughout her career.

Her beef was that I criticized her for filing a misleading affidavit that willfully omitted all information about the injuries Zimmerman had sustained during the “struggle” it described. She denied that she had any obligation to include in the affidavit truthful material that was favorable to the defense.

She insisted that she is entitled to submit what, in effect, were half truths in an affidavit of probable cause, so long as she subsequently provides the defense with exculpatory evidence.

She should go back to law school, where she will learn that it is never appropriate to submit an affidavit that contains a half truth, because a half truth is regarded by the law as a lie, and anyone who submits an affidavit swears to tell the truth, the whole truth and nothing but the truth.

Before she submitted the probable cause affidavit, Corey was fully aware that Zimmerman had sustained serious injuries to the front and back of his head. The affidavit said that her investigators “reviewed” reports, statements and “photographs” that purportedly “detail[ed] the following.”

It then went on to describe “the struggle,” but it deliberately omitted all references to Zimmerman’s injuries which were clearly visible in the photographs she and her investigators reviewed.

That is Hamlet without the Prince!

Dershowitz called the affidavit filed by Corey, whose day job is state attorney for Duval County (where Jacksonville is), a “campaign speech for re-election.” She certainly seems to be willing to tread into deep water on risky prosecutions. One example…

Duval County, Florida prosecutor Angela Corey has something to say to those who have expressed outrage over the prosecution of Marissa Alexander: they are misguided, and missing the point.

Corey, the state attorney who prosecuted the 31-year-old mother of three for firing a gun near where her husband, Rico Gray, was standing with his two sons, had already gained national notoriety in the prosecution of the man who killed Trayvon Martin. Now, she is facing the backlash over a case her office put to rest in March, with many of the same people who praised her for bringing second degree murder charges against George Zimmerman in the Martin killing, condemning her for putting Alexander away.

The fiery prosecutor, known for her fierce victim’s advocacy, takes issue with the protests and the outrage on Alexander’s behalf, saying the Jacksonville woman was the aggressor, not the victim, in the August 2010 incident.

“Because she was not fleeing from an abuser,” Corey told theGrio in answer to why Florida’s Stand Your Ground law was not applied in Alexander’s case, even though Florida’s Supreme Court has ruled in the past that a woman being abused in her own home by her husband has no duty to flee. “A judge heard all the facts and evidence and said that this was not a case of ‘Stand Your Ground,’ Corey said. “You have to compare what [Marissa Alexander] said to what the victims said. There were two young children there as well. None of the physical evidence corroborates her story. There was the 911 call … and you can clearly hear the distress in Rico Gray’s voice. They had a verbal argument [in which] he said ‘I’m outta here,’ and she said, ‘I’ve got something for you.’”

CNN made note of other items forming her reputation…

Since then, Corey, 57, has made waves for the number of cases she brings to trial. She’s also rejected heated criticism, particularly over her prosecution of a 12-year-old boy for murder. Corey is trying him as an adult.

Corey “lives up to every prosecutor’s mantra to be ‘tough on crime,'” wrote Michael Hallett and Daniel Pontzer, criminology professors at the University of North Florida, in a study published this year.

Corey’s record shows she chooses cases based not only on possibility for success at trial, but also “wherever charges seem warranted,” the study says.

It’s certainly looking like Scott either threw Zimmerman to the wolves by bringing Corey into the case, or perhaps set Corey up to hang herself while blowing the Zimmerman prosecution. Either way, the case is a circus which should never have gotten this far – and Florida is likely to get an even bigger black eye than it received with the Casey Anthony trial.