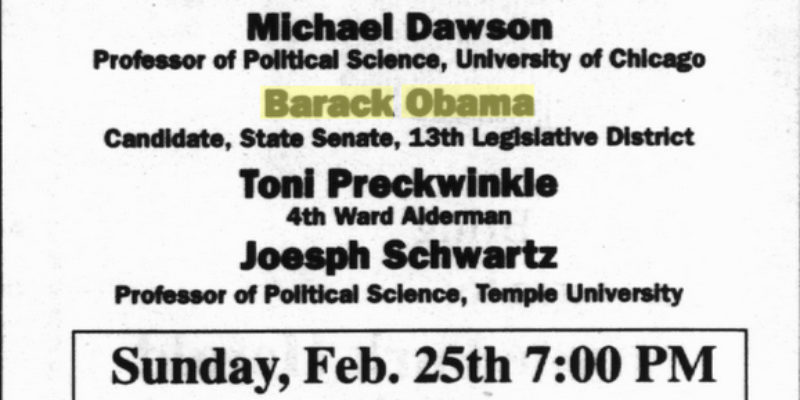 It’s doubtful that most Hayride readers would have any problem acknowledging President Obama as a Socialist. The proof is in the pudding when you look at Obama clinging to wealth-redistribution policies—kinda like those people in small-town America cling to guns and God—as the answer to our nation’s economic woes. Never mind that the signature accomplishment during Obama’s first term was an overhaul of the country’s healthcare into socialized medicine, accusations that the president might have a lot more in common with Karl Marx than Adam Smith are just scare tactics ginned up by conspiratorial-minded conservative crackpots.

Back in 1996, when Barack Obama was running for the state Senate and speaking at events put on by the Democratic Socialists of America, he joined the New Party: 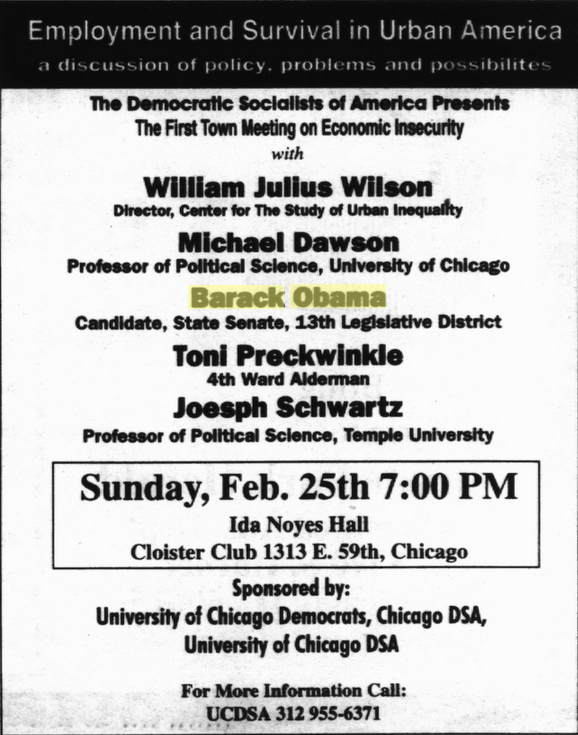 Who are—or rather what was—the New Party? The party, active from 1992 to 1998, was formed by ultra leftists frustrated over the Democratic Party’s slow progress in bringing about revolutionary progressive change to America—you know, fundamental transformation.

If you have in doubts about what they stood for, this was their mission statement:

The New Party believes that the social, economic, and political progress of the United States requires a democratic revolution in America — the return of power to the people. Our basic purpose — reflected both in our own governance and in our aspirations for the nation — is to make that revolution happen. At present, in America, the people do not rule. And they must, if we and our children are to lead lives of dignity, decency, and fulfillment.

Our commitment to democracy comes from our recognition of the moral equality of persons. People really are created equal, and their free deliberation is the best hope for achieving the blessings of liberty. The same recognition fuels our commitment to fairness in social life — not letting such moral irrelevancies as race, gender, age, sexual orientation, country of origin, or inheritance determine one’s life chances. A commitment to democracy, finally, implies commitment to building the popular democratic organizations — clean, effective, and accountable government, democratic unions and community organizations — necessary to any democratic society.

We are thus saddened and outraged by the present corruption of our public institutions; the deliberate weakening of unions and other popular democratic organizations; the short-sighted and cruel economic policies now destroying our cities and communities, increasing inequality, lowering living standards, and wrecking the earth; the special burdens this society still places on women, people of color, and children; the violence it inflicts on the rest of the world.

To promote equality, freedom, and prosperity, we dedicate ourselves to the following:

Wow, sounds like a Marxists wet-dream or at least something that might have been scrawled in an Occupy Wall Street tent between stints of drug induced stupors—or maybe in the middle of one.

Among their lists of successful candidates the party endorsed for office, we find these names under the state of Illinois:

Now, knowledge of Obama’s involvement with the New Party is nothing new and has been chronicled by people like Stanley Kurtz, author of “Radical-in-Chief: Barack Obama the Untold Story of American Socialism.”

Those who argue that Obama being endorsed by a Socialists group—I mean he has also been endorsed for president by the Democratic Socialists of America and the Communist Party USA (nothing to see here)— in no way proves that he is a Socialist say he was never even a party member. They supported Obama because he wore nice suits or something:

As Fight the Smears, says:

Right-wing hatchet man and conspiracy theorist, Stanley Kurtz is pushing a new crackpot smear against Barack falsely claiming he was a member of something called the New Party.

But the truth is Barack has been a member of only one political party, the Democratic Party. In all six primary campaigns of his career, Barack has has run as a Democrat. The New Party did support Barack once in 1996, but he was the only candidate on the ballot in his race and never solicited the endorsement.

This isn’t the first time Kurtz has ventured down this slippery slope — he has a history of telling these kinds of unsubstantiated tall tales. Kurtz is on the record with the sexist and intolerant claim that the national nursing shortage is the “fault of feminism.” And here’s what the Chicago Tribune had to say about this “partisan attack dog:” …Stanley Kurtz’s latest smear is just another attempt to drum up fears and plant conspiracy theories to slander Barack. Fight back with the truth make sure anyone who has seen this smear also sees this page.

It’s always good to fight back against lies with truth. Unfortunately for Obama supporters, truth found in newly released of Illinois Association for Community Organization Reform Now (ACORN) records reveals that this isn’t such a “unsubstantiated tall tale” after all.

From the minutes of the Chicago chapter meeting of the New Party on Jan. 11, 1996:

Barack Obama, candidate for State Senate in the 13th Legislative District, gave a statement to the membership and answered questions. He signed the New Party “Candidate Contract” and requested an endorsement from the New Party. He also joined the New Party.

And how does ACORN play into all of this? Among organizations that helped prop up the New Party were ACORN—the organization that Obama said he had no real ties to in the 2008 campaign other then serving as their lawyer to help enact motor-voter laws in Illinois—and Service Employees International Union (SEIU).

I’m sure that none of these connections prove anything—nothing at all. Since it’s all just a load of conspiratorial crap, let’s throw this in from tidbit boosting New Party membership from the website archives:

Of the current membership, approximately 4,000 are organized into local chapters now active in ten states and the District of Columbia. The balance of members are “at large,” in varying stages of progress toward chapter formation and state structures. Including at-large membership, we now have some contact in almost all states.

Membership is approximately 50 percent women, 35 percent people of color-and predominantly poor, working or middle class. Most people who are helping to build the New Party are known only in their communities, but you may have heard of a few of them (such as Noam Chomsky, Barbara Dudley, Barbara Ehrenreich, Jim Hightower, Manning Marable, Juliet Schor, Frances Fox-Piven, Cornel West). What they all share is the conviction that we need the New Party to restore power to the American people, to build a fair economy and a real democracy.

Those names toward the end look like a who’s who of radical progressives—some admitted Marxists—who hate America’s Capitalist system. That’s a bunch I want to hang out with, how about you?

My favorite name there is Frances Fox-Piven, co-author Cloward-Piven Strategy. She along with fellow Columbia University Professor Richard Andrew Cloward put together a little plan back in the 1960’s to collapse the United States economy by overwhelming it with entitlements so it could be rebuilt on a fairer system based on social justice and income equality.

Here is Glenn Beck, the big papa of crazy conservative conspiracy cuckoos, discussing all of this a couple of years back on his old Fox News show:

Yeah, Beck’s been called a nut-job for things like this. I wonder what’s more crazy—accepting an uncomfortable truth that’s staring you squarely in the face or continuing to shut your eyes to who our president really is after it’s been exposed time and time again that his supporter continue to lie about his associations and ideology.