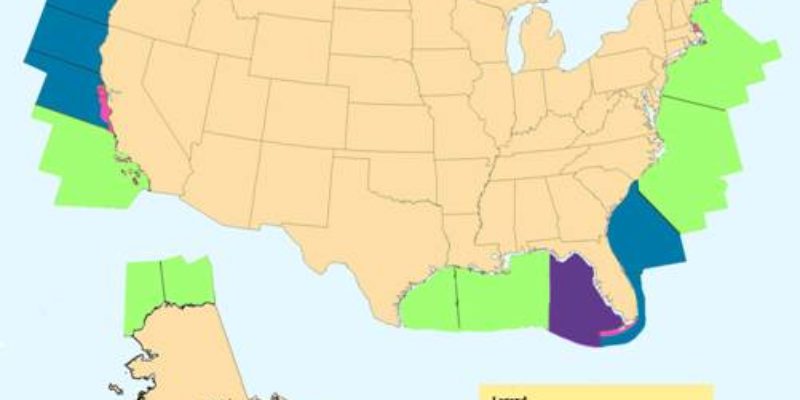 What do you do as president when faced with record-high gas prices, unemployment above eight percent and the Middle East sitting on a powder keg that could go off at any time?

Shut down oil drilling along about 85 percent of the U.S. coastline, of course.

You might have already heard about Interior Secretary Ken Salazar’s five-year leasing plan for offshore drilling. Maybe you didn’t hear about it, since it was released the same day as the U.S. Supreme Court’s Obamacare decision to be able to fly under the media radar as stealthily as possible.

Every five years, the Department of the Interior must create a drilling and permitting plan for the Outer Continental Shelf (OCS), which has to go through 60 days of congressional review before approval.

Here is what the plan looked like under the Bush Administration: 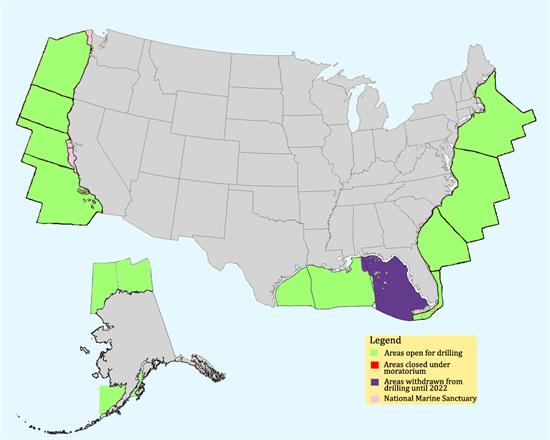 And now we have the Obama plan: 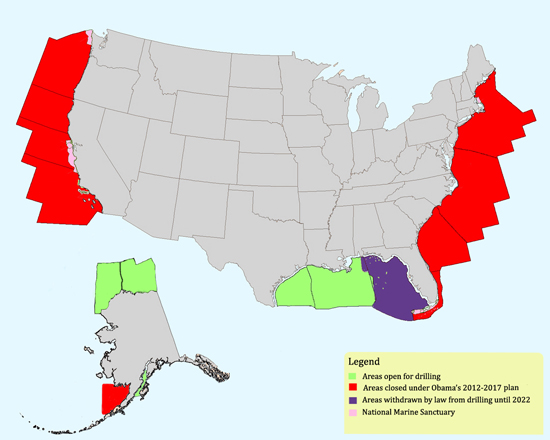 The Obama plan essentially reinstates a 30-year moratorium on drilling off the Atlantic and Pacific OSC—which was rescinded by Bush—as well as shuts down energy production on part of the Alaskan coast. Obama puts nearly 86 billion barrels of domestic oil off limits.

It “cuts in half the average number of lease sales per year, requires higher minimum bids and shorter lease periods, and dramatically reduces lease terms,” as Thomas Pyle of the D.C.-based Institute for Energy Research, explains.

It would seem that Obama’s all-of-the-above energy policy means shutting down oil and gas production while permitting green energy ventures, which more than not fail, to the tune of billions of tax-payer dollars—think Solyndra:

Since 2009 when President Obama took office, the Department of Interior approved 16 solar projects with 5,636 megawatts of capacity, 7 geothermal plants totaling 407 megawatts and 4 wind farms with capacity of 544 megawatts. In 2012, the agency plans to review 17 additional proposals (9 solar, 6 wind, and 2 geothermal) totaling about 7,000 megawatts.[iii]

The Silver State North project (a 50 megawatt solar plant) in Nevada’s Ivanpah Valley, south of Las Vegas, is the first non-hydroelectric renewable plant to operate on federal soil. The solar plant started operating on Monday. It is owned by Enbridge Inc., Canada’s largest oil-pipeline company. NV Energy Inc., Nevada’s main electric utility, is committed to buying its power over the next 25 years.[v]

In 2011, the BLM gave priority status to 18 projects (9 solar, 4 wind, and 5 geothermal) totalling 4,279 megawatts. The projects include one solar project to be built on federal lands in Arizona, 7 in California, and one in Nevada; 2 wind projects each in California and Oregon; and 5 geothermal projects to be constructed on federal lands in Nevada. Decisions are pending on 2 projects and one has been identified as a priority project for 2012.[vi]

The Cape Wind project off Cape Cod, Massachusetts was the first offshore wind farm to get approval by the Department of Interior in 2010. But, the project is having trouble finding buyers for its high cost electricity. The second approved offshore wind project, Bluewater Wind owned by NRG Energy, off the coast of Delaware is having trouble getting financing.[vii]Although none have been built to date, Secretary of Interior Salazar wants to develop wind farms off the coasts of Maryland, Delaware, New Jersey, and Virginia.[viii]

The governors of five states and 10 federal agencies and departments have signed a memorandum of understanding to boost development of offshore wind energy in the Great Lakes. The governors of Illinois, Michigan, Minnesota, New York and Pennsylvania co-signed the memorandum of understanding, which requires federal agencies to streamline and expedite their current regulatory regimes for offshore wind projects. The Energy Department, one of the federal signees, estimates that the Great Lakes has the potential to produce more than 700 gigawatts of energy from offshore wind, about a fifth of the total offshore wind energy potential for the United States.[ix] However, while the winds may be there, so is the higher cost of producing the electricity.

While the Obama Administration is promoting all sorts of renewable technologies on public lands, fossil resource development on federal lands has fallen by the wayside. Oil production on federal and Indian lands has declined by 13 percent in fiscal year 2011 from fiscal year 2010 levels, while production on private and state lands has increased by 11 percent due to less bureaucratic red tape and the advent of hydraulic fracturing technology to get oil in shale formations.[x]Recent government impediments to oil production have included the denial of the Keystone XL pipeline, continued delays in Shell’s Arctic Alaska permits, and the moratorium and permitorium in the Gulf of Mexico after BP’s oil spill accident.

The federal government leases less than 2.2 percent of federal offshore areas and less than 6 percent of federal onshore lands for oil and natural gas production. When oil and gasoline prices peaked in 2008, President Bush and Congress allowed access to additional federal lands for oil and gas exploration.  And, before leaving office, President Bush put forth a new 2010 to 2015 lease plan that included areas for leasing that had been off limits for almost 3 decades.  The Obama Administration rejected that plan prior to the Macondo oil spill and since then has put forth delay after delay.

The Department of Interior now claims that its delay is because of the oil spill, though the Obama Administration had rejected a perfectly good plan prior to the spill. Due to the delays imposed by the Obama Administration, for the first time since the United States has had a comprehensive offshore leasing program, the 5 year plan will not be submitted in time to meet its statutory deadline and give Congress its 60 day review period.

The Obama administration did not hold a single offshore lease sale in fiscal year 2011, while the Bush administration planned to hold five. Those sales were rejected when the Obama Administration decided not to pursue the 2010 to 2015 outer continental shelf lease plan reflecting the expiration of the Presidential and Congressional moratoriums on leasing in 2008 demanded by the public. The Obama Administration is fast tracking renewable energy development on federal lands, while delaying oil and natural gas resource development on federal lands.  It is concentrating its limited resources on the most expensive kinds of energy for consumers, which may reflect its interpretation of President Obama’s statement that under his plans, “electricity prices will necessarily skyrocket.”

The Obama plan is even worse than the Carter years—when we had those gas lines and there was just around 4 million acres open to drilling in the OSC. As Sen. David Vitter put it in a recent press release, “A telling sign the Obama plan is bad: is if your energy outlook looks worse than President Jimmy Carter’s, you have a pretty big problem.”

Vitter, along with Sen. Jeff Sessions (R-Ala.) has introduced legislation to replace the Obama Administration’s OCS drilling plan that basically returns things to the Bush plan of 2007-2012. A similar plan was approved by the House Natural Resources Committee yesterday.

Now what all has changed since 2007, when the Bush OCS plan went into effect? Back then, we had a national unemployment rate of 4.7 percent with gas prices climbing to $2.80 per-gallon and the Middle East—a major supplier of U.S. energy—in turmoil.

Our unemployment rate now is about 8.2 percent and gas prices are averaging about $3.44 per-gallon nationwide. Things have only gotten worse in the Middle East, if you haven’t noticed.

We’ve also had a major oil spill, of course, which the Obama Administration was able to use to shut down energy production for six months in the Gulf, even though it turns out that the Interior Department was advised against doing so by the very people people they used in an altered report to make the case for the moratorium. We are now being told Republicans looking into the matter is just “beating a dead horse.”

The biggest difference between now and 2007 is that we’ve got a socialist ideologue in the White House who promised to enact policies that would cause energy prices to soar. It’s one promise that he’s kept.

Interested in more national news? We've got you covered! See More National News
Previous Article It Sounds Like They’ve Got The Votes To Kill The Law Of The Sea Treaty
Next Article BRIGGS: A Quick Course On Natural Gas Storage In Light Of That Sinkhole Thing