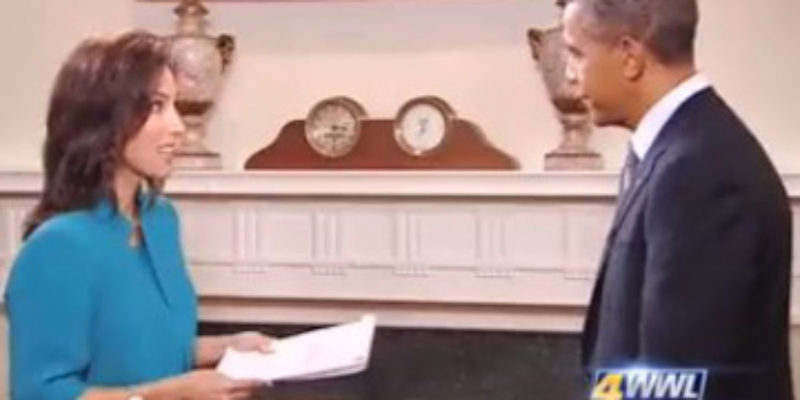 Yesterday, the White House took in reporters from eight local TV stations around the country and President Obama gave five-minute interviews to each.

WWL-TV in New Orleans was one of the eight, and the station sent reporter Karen Swenson to Washington for the assignment. Swenson brought several questions from viewers for the president to answer, mostly about taxes, Obamacare and the economy.

This was the result…

If you’re missing the video, the news here is that Obama, presented with a scenario in which Congress passes a bill to keep the Bush tax rates for everybody in the country – including the million or so households from whom the president wants to stick with an $85 billion tax increase – says he’d veto the bill.

There’s a reason why the Romney campaign is about to embark on a program of calling the president a liar, and this is it.

First of all, Obama isn’t giving anybody a tax break. If he does what he says here, your taxes would stay the same if you’re under 250K a year. That Obama is arrogant and dishonest enough to call keeping your taxes the same a “break” doesn’t change the fact that they’re the same. They won’t go down. That’s not a tax break.

Second, to “cost a trillion dollars over the next decade” requires a formulation that somehow it’s the government’s money being given away to the “richest two percent.” That kind of thinking is why Obama’s critics call him a socialist; when you believe that money individuals earn somehow belongs to the rest of us who didn’t earn it, you’ve got all the hallmarks of a socialist.

And third, Obama seems to think there’s no economic value in allowing people who are good enough at making money to keep what they make. This shows him not only to be a socialist but an economic illiterate. How does Obama think Warren Buffett got so rich? Buffett made his money by figuring out what companies were smart investments and then investing in them. Obama doesn’t think a guy like that would grow the economy if he had more money to invest?

It’s worth adding that “we would have to cut something” shows how divorced from reality the president is. In the first nine months of FY 2012, his government ran up $900 billion in deficits. That doesn’t mean “we would have to cut something” if Obama doesn’t get to stick it to rich people; his attempt to drill into Warren Buffett’s wallet would produce $85 billion a year in revenue – less than a month of the deficit he’s running up at the current pace.

That means “we would have to cut something” no matter what, Mr. President. How come you don’t have a list of things to cut? And if you got your way and instead of a $1.2 trillion deficit we’re going to run a $1.115 trillion deficit there would be no problem?

This rhetoric would mark Obama as a fool if he was a Congressman from some South Chicago sluicehole. As president it makes him a disaster.

Yeah. Well it’s absolutely true that religious liberty is critical. I mean that’s what our country was founded on. That’s the reason why we exempted churches, we exempted religious institutions, but we did say that big Catholic hospitals or universities who employ a lot of non-Catholics and who receive a lot of federal money, that for them to be in a position to say to a woman who works there you can’t get that from your insurance company even though the institution isn’t paying for it, that that crosses the line where that woman, she suddenly is gonna have to bear the burden and the cost of that. And that’s not fair.

“You can’t get that from your insurance company even though the institution isn’t paying for it?” Have we really elected a president who doesn’t understand that when you buy insurance for your employees everything covered in that insurance is included in the rate you pay? That’s a level of economic illiteracy which would effectively disqualify Obama from middle management in nearly any American corporation.

And why is it “not fair” that women who choose to work in Catholic institutions wouldn’t be able to get those institutions to pay for things contrary to their core beliefs? The women in question are free to get jobs in other institutions, are they not?

Well, maybe not in Obama’s economy. That’s a valid point. When there are no jobs to be had, perhaps that freedom doesn’t exist.

Which brings us to another of his greatest hits…

Swensen: “When you took office, in New Orleans the unemployment rate was 6.1 percent. It’s now, it’s 7.2 percent. With 4,000 people losing their jobs just between April and May. What would you say to those constituents, to those voters who would say I’m not better off with all due respect than I was four years ago, I’m worse?”

Obama: “Well, you know if you look at what’s happened not just in Louisiana but across the country, most of those job losses initially came in the first six months of me being in office, right as we were hitting the worst part of the crisis, and we’ve been doing clean-up ever since. I mean this is essentially, it was like a financial hurricane that hit and we’ve been cleaning up ever since.”

This is an attempt to blame Bush, which is all Obama has in his arsenal when he’s approached about his economic record, but it’s not a particularly good one. Let’s remember that Obama’s election scared the bejesus out of the small business community, and among the first things he and his fellow travelers in Congress began discussing were the Lily Ledbetter law, Card Check and Cap and Trade – the mere mention of all three would naturally give entrepreneurs a case of the vapors. When you scare the hell out of business owners, they cut costs everywhere they can and batten down the hatches.

So no, Obama can’t just dodge responsibility and say it’s all Bush’s fault that the economy tanked after he was elected. When you hire a tax dodger as Treasury Secretary, put global-warming fraudster and registered socialist Carol Browner in as your “climate-and-energy czar” and add people like Lisa Jackson, Ken Salazar and Steve Chu to your cabinet, the economic effect won’t be a good one. Obama did nothing whatsoever to calm fears of an economic downturn; in fact, his early economic message was essentially that he wanted to outlaw the business cycle.

Not to mention that “we’ve been doing clean-up ever since” implies that somehow Obama can clean up the economy and the people who actually make it function – otherwise known as the people he’s trying to pillage for $85 billion in new taxes a year – don’t have the major role to play there.

This is what five minutes of conversation with Barack Obama is like.

Can you imagine what four more years will be like?

Interested in more national news? We've got you covered! See More National News
Previous Article Why Media Credibility Is Down The Tubes
Next Article Understanding Obama