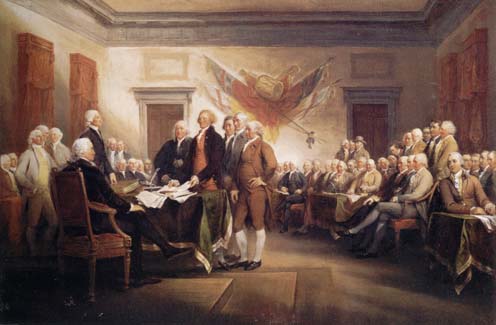 Tomorrow is July 4th. We celebrate the birth of our nation. Today, it means cook-outs, sparklers, firecrackers and skyrockets making us happy with loud noises, bountiful colors in the sky and the chance to eat foods other people across the world can only dream of at times. We’re a land of incredible bounty and the world is a competitor to acquire by conquest and a misplaced sense of entitlement what our forefathers fought for, suffered and died to realize.

I wonder if they’d even recognize this land as theirs if they saw it today.

America was forest covered, inhabited by societies interacting like any others in the world today. There was competition for resources. There was intrigue and conspiracy. There was diplomacy and statesmanship. Cultures existed alongside and in controversy to each other. Sometimes things went well, other times not so well.

When the Virginia Colony was settled and the Mayflower Compact was entered into, the internal dynamic of this once pristine wilderness changed drastically. European sensibilities and sensitivities arose. We began intermingling, interloping and inter-marrying among the native races and divergent immigrant cultures.

Our sense and practice of government became hybrid. It was mixed and amalgamated with native theories borrowed, adapted and translated to use in a modernizing culture. This culture grew stronger and more independent of outside influences it refused to understand were like viruses infiltrating our systems; some for the good of the country and others for the detriment. We were inoculated with theories and strengthened in certain instances from the vagaries of untried concepts. We adopted them over time, blending them into our own while trying to be fair in thought and practice: honest in act and deed, while we tried applying these new notions.

Sometimes these ideas worked. Other times they were discharged to the growing scrap heap of aberrant behaviors.

But our founding fathers differed from us. We’ve learned to separate ourselves from essential actions and participation in our government for no better excuse than to say “I’m tired”. These people were necessarily participant in the battle to secure our “live born” but endangered, liberties as Americans. We’ve allowed a culture of demanding, narcissistic, self-serving, self-centered and whiny children feeling entitled to all there is available and the detriment of all others needing services, to become a growing party of dominance.

Thomas Jefferson said: “I predict future happiness for Americans if they can prevent the government from wasting the labors of the people under the pretense of taking care of them. Would Jefferson recognize this land?

Our liberties are held to be sacred and inviolate. Some have taken the notion they can be twisted to the point of dissolution. These people believe they have a license to pursue their desires aggressively and selfishly, unchecked by morality or ethics, especially in societal and community matters. Where once the thought was that the meek would one day inherit the earth we find the lazy expect it to be handed to them on a platter with garnish and side salads available.

Our nation’s been subverted to new thinking never before dreamt of by the founders. They were relatively simple men, educated in the thinking of their forebears and theorists (understood to be no more than theorists). Theory is meant to shade, not color the thinking of a man. Theories are meant to be the spice added to the dishes we know as integrity and veracity; things that nurture and fulfill men’s souls and minds.

Conservative in nature, resolute in action, determined in practice the founding fathers fought to create the United States of America; not a cheap and tawdry replica of a deviate, dissipated and profligate Europe.

Sam Adams said: “It does not take a majority to prevail… but rather an irate, tireless minority, keen on setting brushfires of freedom in the minds of men.”

We must take America back from these people.