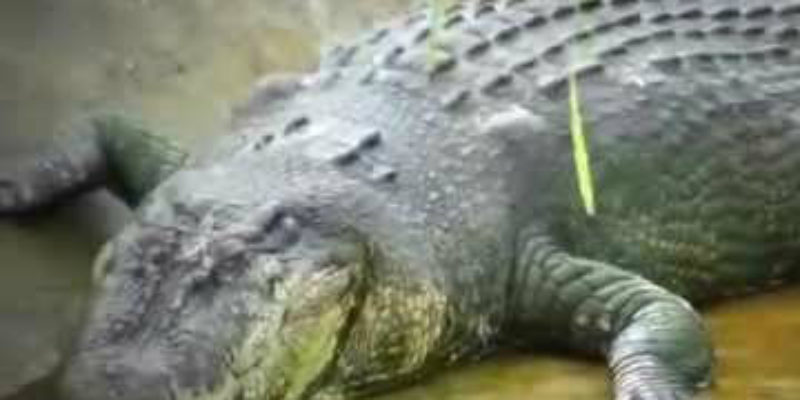 They reel in 12-13 foot gators on Swamp People all the time – though they usually blast holes in the back of the big lizards’ heads before reeling ’em in.

And they’re awfully good at it. But Troy and Jacob and Bruce and Willie and Junior never had to take on a degree of difficulty like this.

Meet Lolong. He’s 18 feet long (actually 20.24 feet long) and 2,370 pounds, and he’s a man-eatin’ saltwater crocodile from a place called Bunawan on the southern Philippine island of Mindanao. This is video of the locals trying to get Lolong to an area they set up as an exhibit after he was caught back in September of last year.

From that video, you can pretty much tell that they do things in the Philippines you’d never see done in America. The animal rights gang would have a conniption fit if you tried to put a critter in a rig like that and drag him across a creek, for example.

As it happens, they hooked Lolong, who was named after the guy who led the hunt for him and who had a heart attack from the stress of trying to catch him a few days before they actually caught him, up with a pretty nice crib. Most Filipinos don’t get set up this well… 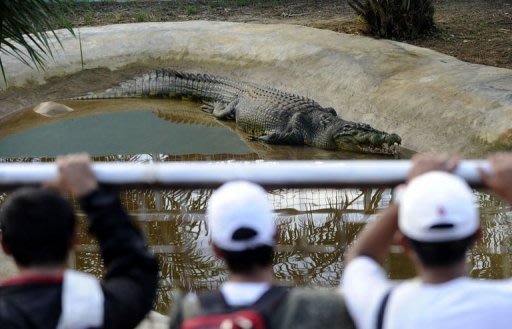 But that deal isn’t enough. The animal rights crowd says they gotta put Lolong back in the creek they found him in.

Except that the reason they put out all the energy to catch Lolong in the first place is that they think he’s killed at least two people, one of whom was a kid whose head was found sans the rest of him. And somehow they managed to look in his stomach – God knows how; they must have knocked him out and stuck a probe down his throat (yes, that’s your daily Hayride grossout quota filled right there) – and found pieces-parts of several water buffaloes the locals noticed went missing in the weeks before they caught the croc.

So the idiot animal rights gang say “hey, you gotta put a 2,370-pound, 50-year old crocodile who’s done a Jeffrey Dahmer on two of the locals back out there so he can do some more.”

That’s like sayin’ let’s put Charlie Manson back out on the streets.

We’re talkin’ about the Philippines here. The next animal-rights guy who runs his yap about the croc oughta get an invitation to come see him in person, then they oughta throw his ass in that pond. Lolong’d be cool with that, and the animal-rights guy would get to take care of his jones for gettin’ close to nature. They say some of these guys want to do that in the worst way; well, this would be the worst way, right?

Seriously. Look at this thing. You comfortable with THIS livin’ close by your crib? 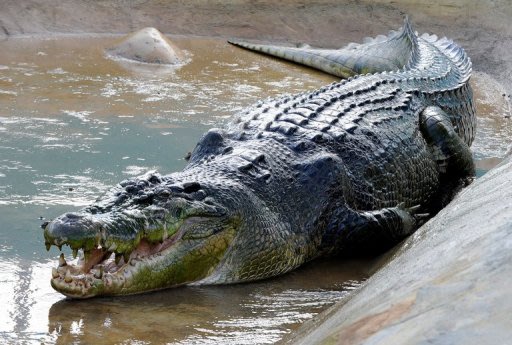 Sure, let him go. What could go wrong? Nothin’ the PETA crowd would notice, fa sho. He’s just a harmless, armor-plated, pissed-off collection of teeth. Just put that anywhere.

But the point is the difference between here and there. Here, if you were gonna catch a monster like that you’d be doin’ it with a truckload of drugs and a super-mechanized contraption – probably on a crane – to land him where no human being would be within 20 feet of him. Then you’d have a semi-trailer to stash him in for a ride to some zoo somewhere, complete with a police escort and sirens and a SWAT team and so forth with a battalion of lawyers on hand and a bunch of Fish and Wildlife bean counters on hand. And then at the zoo you’d have another super-mechanized contraption – probably with another crane – to fish him out of the trailer into some bulletproof-glass-encased exhibit he’d crash in – no chicken-wire and wood railings six foot high some dude could scale over and go get eaten, because that’s how you’d get the poo sued out of you.

Troy and Jacob and Junior and Willie and Bruce and even those two crazy brawlin’ Houma Indian dudes with the military rifles and the airboat wouldn’t even take the chances these Filipino dudes take. Trapper Joe might, but only with his girlfrien’ – not a gator or a croc like this.

But in the Philippines, they do things a lil’ different. Gotta get a 2,370-pound dinosaur across a creek and the local bridge which is made up of a couple planks strewn across the water won’t hold him? Try to put him on a rice cart and he decides to shake the thing into toothpicks? No problem. We’ll just chop up the closest tree and make a raft we’ll drag him on, down the embankment and across the water while we got him wrapped up in a buncha ropes that look like they’re even older than he is. 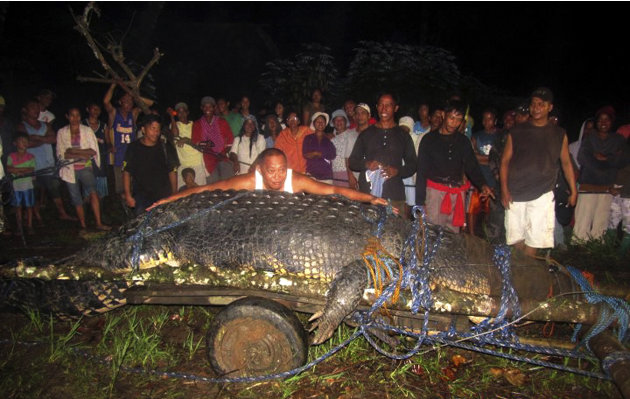 Then they pour some concrete and make a pool, plant one of those banyan trees and then put some railings and chicken-wire together and call it an “eco-tourism park.” Lolong replaces handmade straw mats and medicinal howler-monkey penises as the top local industry.

Boom. There you go. That’s called prosperity, baby. That croc went from treatin’ the locals as hors-d’oeuvres to keepin’ the whole town in flip-flops almost overnight. We can’t even build a pipeline where they don’t have crocodiles or even Democrats, for that matter, without some pinhead bitchin’ about prairie chickens or somesuch.

Safe to say they’re a lil’ less risk-averse than we are. They got a few less lawyers, too.

Here’s something: seems like Florida is the only place where they have crocodiles and lots of lawyers together. Everywhere else you can get one, but not the other. Wonder if that’s a coincidence.

Crocs don’t eat lawyers, do they? Or is it the other way around?