Doesn’t it give you a warm feeling looking back on school days of yore and recalling being herded into a gymnasium by teachers to be led in hymns exalting the president?  How about the way the smell of Elmer’s Glue mingled with incense stirs childhood memories of joining fellow classmates for Earth Day celebrations to encourage “individuals, corporations and government to join together to create a global green economy?”

Doesn’t ring a bell? Yeah, to be honest, I’m kind of fuzzy on those things too. Maybe watching a couple of short videos will help jar the memory:

Really cute in a Hilter Youth sort of way, I guess. Still, I don’t remember anything like this growing up in Louisiana public schools.

Maybe another video will bring about feelings of nostalgia:

Nope, nothing here either.

Funny, I don’t recall a single giant whale or one discussion about the earth taking care of me from my school days. A tornado did rip part of the roof off Vidalia High School while I was a student there. Those were the days before Louisiana school kids got to skip class to pay homage to Mother Earth on Earth Day. She was probably pissed. Can’t imagine what those school kids along the Gulf Coast did to bring on those hurricanes over the last decade. Mother Earth is moody, it seems.

Anyone on the left reading this is most likely rolling their eyes right now and scoffing at a conservative Louisiana blogger creating straw-man arguments to diss public schools. If so, they might have something of a point. While leftist propaganda permeates in public schools throughout much of the nation, it hasn’t made much of a dent in the Louisiana school system—which is not to say it hasn’t seeped in at all.

Earth Day—a creation of far-left environmentalists that was first celebrated, incidentally, on the the 100th anniversary of Vladimir Lenin’s birth—is a perfect example. Man-made global warming theory, the lie behind Earth Day indoctrination, wasn’t a big deal when I was growing up. Now it’s pretty much a given in public education and kids are taught it as indisputable fact, kind of like I was taught that Franklin Delano Roosevelt’s New Deal brought us out of the Great Depression. More scholars are making the case these days that Roosevelt’s policies actually did just the opposite and the global warming myth is steadily being debunked, as well, even by the co-founder of Greenpeace.

No problem. There are lies enough to go around and these last couple still have a few good miles left on them.

I was fed a little leftist propaganda while in school, but it was nothing like the stuff that goes on today. While most of my education was in public schools, I spent three years at a Christian private school (grades sixth to eighth). There, I learned about the Bible as part of a curriculum that was otherwise much like the one taught in public schools. I don’t ever remember studying about the Loch Ness Monster. It might have been cool if I did, however, and a lot more fun than the algebra classes I took. 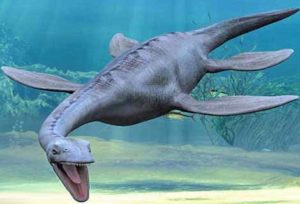 For those opposed to the expansion of Louisiana’s school voucher program under Gov. Bobby Jindal’s school reforms, Nessie is the straw-man argument du jour.

Scouring a text book used by a parochial school that has applied for vouchered students, school reform opponents came across a passage that reportedly reads   “Are dinosaurs alive today? Scientists are becoming more convinced of their existence…Have you heard of the ‘Loch Ness Monster’ in Scotland? ‘Nessie’ for short has been recorded on sonar from a small submarine, described by eyewitnesses, and photographed by others. Nessie appears to be a plesiosaur.”

The school in question is Eternity Christian Academy in Lake Charles and the text book is Biology 1099, produced by Accelerated Christian Education.

The anti-voucher crowd sees this as a smoking gun. How could Louisiana possibly divert money, which would follow students, from our fine public schools to teach that dinosaurs might exist today? The implication, of course, is that it’s irresponsible to allow public money to be spent on private schools that will shovel this kind of nonsense down students’ throats with no accountability. Better to let public schools shovel their own nonsense down kids’ throats with even less accountability and pass them on to higher grades.

Is the Loch Ness Monster passage stupid? Definitely. Do private school students really believe that dinosaurs are roaming the earth these days? Doubtful.

First, let’s make something clear—it’s really none of the voucher program detractors’ damned business if private schools are teaching from books that say that Jesus rode George Washington on Nessie’s back across the Delaware River to win the American Revolution. I don’t care and neither should they—unless it’s their kid being taught this.

The reason I doubt that educators in private schools are spending time teaching about Nessie is because these institutions’ very existence is inescapably linked to accountability—a simple concept that opponents of the voucher expansion aren’t able to grasp. Poor kids in failing public schools are trapped in a situation they most often can’t escape.

The voucher system gives them an escape.

Private schools are held accountable for educating students by parents who dig in their pockets and keep them in business. With the voucher expansion, poor parents will now have a way to give their kids a better education and they will demand a good education. They will be holding schools accountable and those that send kids home babbling about Nessie aren’t going to succeed in the voucher program.

As I’ve said before on this blog, parents who take the time to apply for vouchers are not uninvolved, armchair parents. They aren’t stupid or clueless, either. It always astounds me the way those on the left think that everyone is stupid and clueless except themselves—usually among the most stupid and clueless society has to offer. Voucher parents will demand a good education or these schools won’t be getting their kids.

It’s worth noting that bad voucher schools should be allowed to fail, as well as succeed. If not, the free-market principle behind the idea will be meaningless and the schools will become nothing more than the unaccountable recipients of state money their critics paint them as. Louisiana public schools, on the other hand, constantly rank among the worst in the nation and the worst of the worst continue to fail without being deservedly shuttered.

Kids that come home from public schools babbling about Muslims beating Columbus to the New World or Jesus being a Palestinian will be okay, however. These are a just a few of the things being taught in public schools throughout this country that leftists who are generally in a tizzy about religious indoctrination in private schools don’t seem upset about:

The reason that you don’t hear much, if any, griping about these things from the left is because it’s leftists who work stuff like this into public school textbooks. It supports many among their ranks’ belief that Arabs—particularly Palestinians—are are victims of Israeli persecution that’s sanctioned and aided by America. The propaganda is spread through public schools—on the taxpayer’s dime—to help drive American foreign policy. Got to the get the kids on the anti-Israeli kick early on.  Got to make them environmentalist activists too, so the nation can waste billions on flawed energy policy by investing in green companies. Gotta get them out there to sing songs in praise of Barack Hussein Obama—MMMM, MMMM, MMMM.

Isn’t it interesting how easily the left’s agenda in public schools has worked its way into American public policy that’s destroying our economy and making our nation weaker throughout the world? Not to mention the way complex social issues best left to the home, like homosexuality and contraception, are being worked into public schools under the guise of anti-bullying campaigns and health classes. I could go on, but you get the point.

And the left is bitching about Nessie. Really?

We will have to wait a generation, I suppose, before children who have been sufficiently indoctrinated in private schools through vouchers send politicians to Washington so they waste billions in foreign aid to Scotland to help out with the dinosaur problem. When we get there, maybe I’ll take their straw-man—or straw-plesiosaurus—argument seriously.