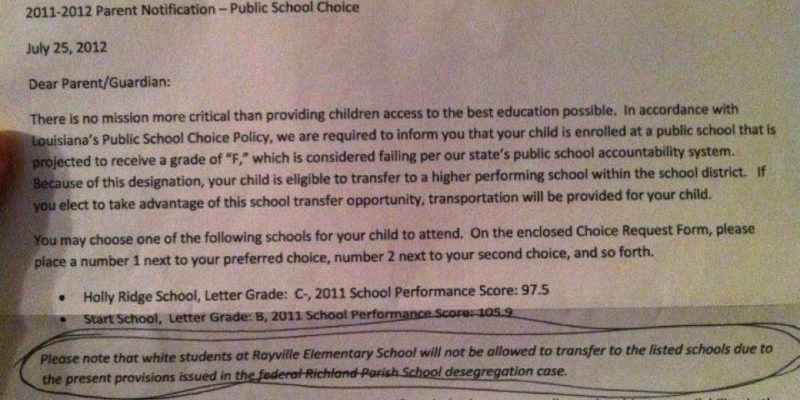 So, are only black kids in failing schools going to be eligible for vouchers in Richland Parish? That seems like a logical assumption if you take what’s going on in Louisiana’s Public School Choice policy in Richland and apply it to the new school voucher expansion.

Leave it to the feds to muck things up time-and-time again, which is what all this is all about. The public school choice provision comes through us from the No Child Left Behind Act, which gives parents whose children attend low-performing schools the option to transfer their children to better schools.

Sounds like a good idea, right? Only there is a problem in Richland Parish, which is subject to a 1968 federal court order issued to keep white kids from transferring out of schools if leaving would cause the school to be classified as “all-Negro.” This edict, seemingly in violation of the 1964 Civil Rights Act, has been going on for years. New light is being shown on the controversy, as education officials try to sort out what all of this means to students who have become eligible for the School Scholarship for Educational Excellence—school vouchers—under Louisiana’s new education reform.

Rayville Elementary School has an “F” rating, based on this year’s School Performance Scores (SPS) evaluations. The school has sent out letters to parents notifying them that their children have to chance to attend an “academically acceptable” school—that is, if their kid isn’t white: 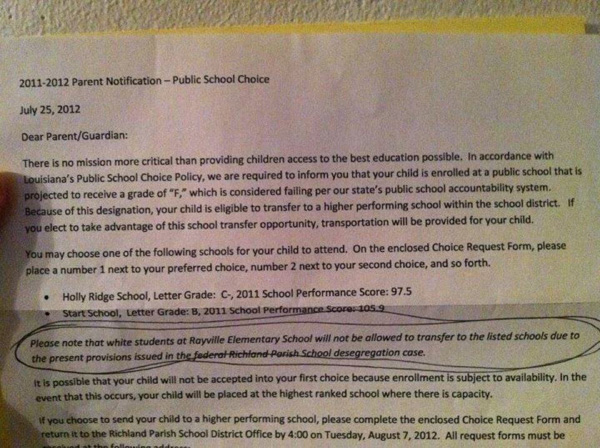 In case you have trouble seeing the circled part, here’s how it reads, “Please note that white students at Rayville Elementary School will not be allowed to transfer to the listed schools due to the present provisions issued in the federal Richland School desegregation case.” The listed schools are Holly Ridge School, which has a “C-” rating and Start School, which has a “B” rating.

So, this begs the question whether or not a white applicant from Richland Parish who is chosen in the new voucher lottery will similarly be excluded from transfering to another school.

I contacted the Louisiana Department of Education with this question and was given the same statement that they are giving everyone at this point, “The Louisiana Department of Education believes all children in the state should have the opportunity to determine the best school for their children. We hope the Richland Parish School Board and the U.S. Department of Justice will continue to work together to resolve this issue and ensure all students have equal access to a high quality education.”

What the LDOE is saying is that it’s out of their hands and it’s something that the DOJ is going to have to fix with Richland Parish. Well, someone at the DOJ better get busy working toward some kind of injunction before a student finds out that the color of his skin disqualifies him from getting a voucher.

We have Eric Holder in charge, so you can bet he’ll get right on this. Stay tuned…

Interested in more national news? We've got you covered! See More National News
Previous Article A Message From The Cows
Next Article We’re In An Economic Depression; You Guys Just Don’t See It Yet