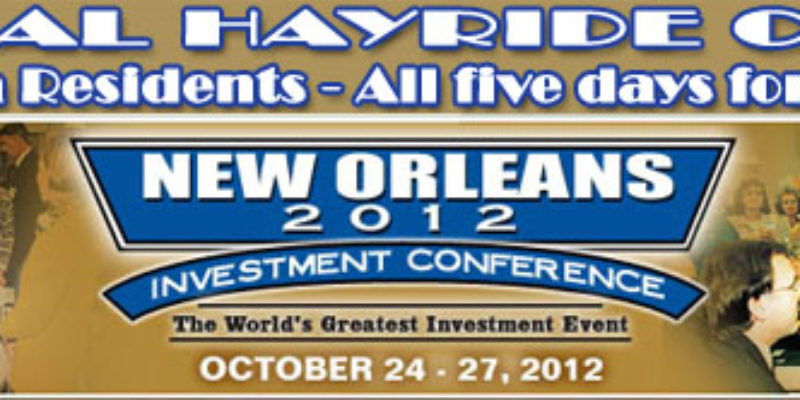 We wanted to take a minute and explain why we’ve developed a business relationship with them.

As it turns out, the New Orleans Investment Conference is a pretty big deal internationally, but it’s something of a well-kept secret here in Louisiana. And since our readership generally conforms to the group of people who might be interested in the event, it makes a lot of sense for us to get together.

First, a bit about NOIC…

The New Orleans Investment Conference is an institution…the one place where the world’s most sophisticated investors gather every year to discover new opportunities and strategies, exchange ideas, plan for the coming year and enjoy the camaraderie of like-minded individuals in America’s most fascinating and entertaining city.

Founded in 1974 by legendary entrepreneur James U. Blanchard III, the Conference is now in its 39th consecutive year. It ranks as the preeminent gathering of private investors and attracts wealthy individuals from all 50 states and over 35 nations.

Money Magazine has called this thing “the greatest investment show on earth.”

The conference includes dozens of speakers who talk about the political and economic environment investors must swim in, a significant number of corporate presentations and great networking opportunities. Some highlights from last year…

This year’s conference will take place on October 24-27, and it will be at the Hilton Riverside in the CBD.

The roster of speakers is an awfully impressive one. Among them: Rick Santelli, the father of the Tea Party, will be there. So will Charles Krauthammer. Peter Schiff, who we love, will be there. Mark Skousen, whose stuff we’ve linked to from time to time.

We’ve cut what we think is a pretty attractive deal for our readers interested in attending the New Orleans Investment Conference. Louisiana folks who sign up for it through the Hayride can get in the doors for only $350 – that’s $350 for all five days. $350 is a savings of up to $645 from the regular rate.

Wait – here’s something even better. As a very special bonus, a few early responders will be able to meet Sarah Palin and have a photo taken with her. But because this is a very exclusive group, only the first 25 people who register can be guaranteed to be included. This is going to go really quickly – people like Sarah.

If you want to be included in that number, this is the link you’ll want to use to register. But like I said, do it quickly. By next week it’s pretty likely all of the free slots will be full to meet the Left’s most hated political figure, and to get into the VIP reception will cost more.

We strongly encourage our readers to take part in the event. As we all know, this is one of the most important years/election cycles in our history, and the outcome of those elections will greatly color the strategies you as an investor must use to preserve and grow what you have. That requires information – the kind of information a conference as elite as this one can provide as well or better than any other.

Just hit the link above or the image below, or the ads you’ll see on the site, and you’ll be on your way to joining an exclusive club of folks who can invest from an inside position in these dangerous economic times.

Interested in more national news? We've got you covered! See More National News
Previous Article Bread, Wine And Games
Next Article Holder To Be Slapped With Fast And Furious Lawsuit During Congressional Recess