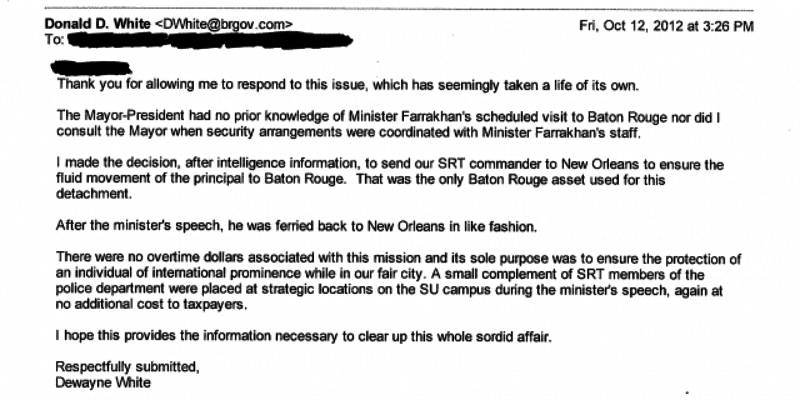 We now seem to have some sense of closure to last week’s controversy surrounding what degree of “welcome” Baton Rouge mayor Kip Holden offered to noted racist demagogue Louis Farrakhan when the latter arrived for an address to some 1,000 people at an event sponsored by Southern University’s Nation of Islam chapter on Oct. 3.

It doesn’t appear that Holden was on hand for Farrakhan’s address at Southern that night or that Holden went down to New Orleans to meet him at the airport.

So why was it that Farrakhan made a point of thanking Holden for “welcoming” him to Baton Rouge?

Lots of questions began floating around after that video surfaced last week.

And over the weekend we got a copy of a letter sent out by DeWayne White, the police chief in Baton Rouge, regarding that “welcome…” 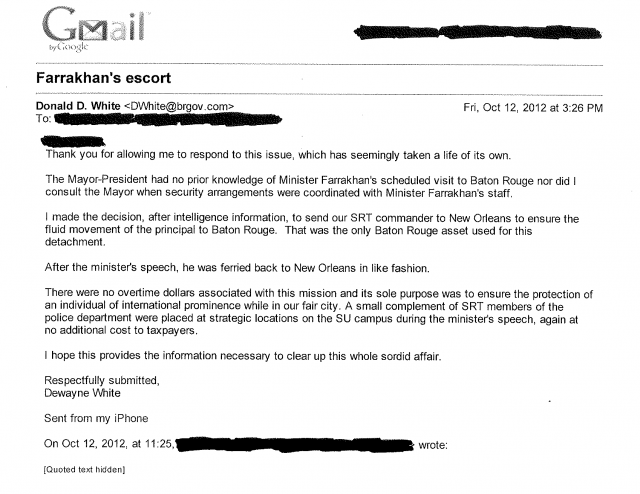 SRT is the Baton Rouge Police Department’s version of the SWAT team.

Obviously somebody did something Farrakhan thought was noteworthy; otherwise he wouldn’t have mentioned Holden and White in his address. Sure, he thanked a lot of people – one imagines Farrakhan is so universally despised that when somebody actually gives him a forum he has to be effusive in his gratitude.

Particularly where Southern’s president James Llorens is concerned. Because Grambling decided Farrakhan was too hot to handle; Llorens thought it was fine to bring him in. No word yet on Southern inviting other more diverse speakers like J.C. Watts, Allen West, Tim Scott, Angela McGlowan, Mia Love or C.L. Bryant in an effort to broaden the minds of the denizens of that campus. Don’t even bother asking those questions.

But that two of the recipients of Farrakhan’s gratitude were Holden and White does raise questions.

And that law enforcement personnel were pulled out of circulation to babysit “an individual of international prominence?”

Decide that one for yourself.

Interested in more national news? We've got you covered! See More National News
Previous Article The ‘Freedom To Succeed’ Ad Everybody Is Talking About Today
Next Article For Every Person Added To The Labor Force Since January 2009, Ten Have Left It