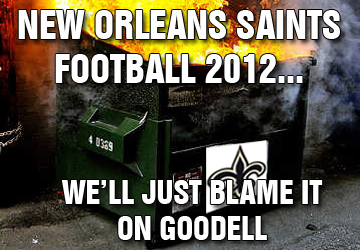 It was Tagliabue who hit the brakes on the prospect of the franchise abandoning New Orleans for San Antonio after Hurricane Katrina leveled south Louisiana and coastal Mississippi.

For breaking up that play, Paul Tagliabue should be revered in the community and his name should have a place of honor in the Superdome right next to the Super Bowl XLIX banner. Had a lesser man been running the NFL, said banner might be hanging from the rafters in the Alamodome.

And earlier this week Tagliabue, whose high school alma mater’s fight song is “When the Saints Go Marching In,” nullified his successor’s heavy-handed penalties on the two active and two former Saints players who were implicated in the so-called Bountygate scandal.

After word initially broke about the existence of a bounty system, Saints players and fans feared the worst and NFL Commissioner Roger Goodell more than delivered.

Goodell has tormented the Saints organization with the same contempt Prison Warden Samuel Norton treated his inmates in the film The Shawshank Redemption.

Last season, the Black and Gold was a game away from hosting the NFC Championship Game yet after Goodell was finished hurling major appliances at the organization’s front office, coaching staff and players, the team experienced its worst season in seven years after starting the 2012 campaign 0-4.

“Warden” Goodell also took a shot at the team’s future by yanking their second round draft picks in 2012 and 2013. In total, the Saints suffered the closest thing to the “death penalty” that any professional football team has ever received for a transgression.

To be honest, I wouldn’t be surprised to learn that the team had an organized “bounty” program.

Audio of ex-Defensive Coordinator Gregg Williams’s methodical injury rant prior to the divisional playoff game against the San Francisco 49ers indicates such a mindset. That said, I doubt the Saints were the only team to have an informal cash payout system to reward defensive plays or “cart off’ hits.

Many Saints fans have taken Goodell’s sanctions against the team personal and have profanely responded in-kind. I don’t think Goodell has any animus towards the city, the team or its personnel. At least going into it.

A number of concussion lawsuits have been filed by former players against the NFL and by demonstrating overkill, the league and its owners might be trying to mitigate potential liability through stiff penalties to athletes who intentionally try to injure their peers and coaches who encourage this behavior.

I have little doubt that the concussion lawsuits will eventually end up before a sympathetic jury, judge or panel and that the NFL will one day hand out a very large check. And you can bet the league is going to try to shave a billion or so dollars off that settlement by pointing to the aggressive penalties handed out to those engaged in on-field “headhunting.”

The Saints were just convenient perps. Nothing personal, just business.

But Goodell overstepped the boundaries of reason and credibility with the severity of his penalties and his singular focus on the Saints, who would bear the sins of the other teams whose bounty systems had not been exposed.

The Bountygate soap opera seemed to shift away from “protecting the shield” to communicating to one and all that they should not just respect Goodell’s authority but to fear it as well.

And though the players’ union agreed to a rigged “all appeals lead to Caesar” system of intra-league justice, the blatant absurdity of the process didn’t play well in the public, which is why the former league commissioner was brought in to consider the matter.

After the franchise has endured a drawn-out public evisceration, Tagliabue had the good judgment to call off the Furies that have relentlessly pursued the Saints throughout 2012.

Though he did not give us back our head coach, our draft picks or our season, one of New Orleans’ greatest friends and the world of sports’ greatest executives should be thanked for rescinding Goodell’s jihad against linebackers Jonathan Vilma and Scott Fujita and defensive linemen Will Smith and Anthony Hargrove.

With New Orleans down a second time, it was Paul Tagliabue to the rescue once again.

Interested in more national news? We've got you covered! See More National News
Previous Article Is It Not Time To Personally Demonize The Left Along Alinskyite Lines?
Next Article GET THE POPCORN: Anonymous Now Threatens To Destroy Westboro Baptist Church