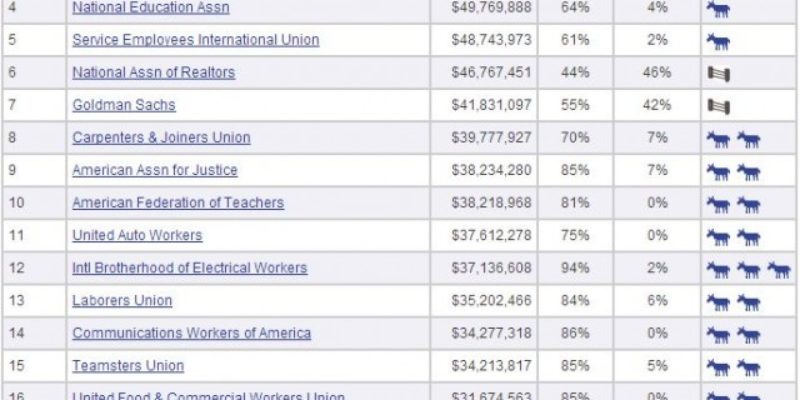 A “mostly peaceful” demonstration over the imminent passage of Right-To-Work legislation there. Americans For Prosperity had set up a tent outside the state capitol, and here’s what happened once the union thugs brought in for a protest got a look at it…

The conservative humorist Steven Crowder was pummeled by some of the same folks.

The Battle of the Overpass, incidentally, was an event back in 1937 in which United Auto Workers leaders were attacked by Ford Motor Company security guards while demonstrating outside Ford’s River Rouge facility. It wasn’t all that big a deal, but photos were taken of the melee and it became a rallying cry of sorts for the unions.

Maybe the Battle of the Tent is the new rallying cry.

The unions are engaged in this week’s thuggery because they know what the import of Michigan becoming a Right-To-Work state is.

They know that if the unions can’t compel membership in Michigan, they’ll have an immense amount of trouble compelling it anywhere. Dominoes will fall everywhere Republicans get hold of a state house and a governor’s mansion.

And the Democrat Party knows that if Right-To-Work becomes the wave across the country – Michigan would be the 24th state to pass it – the current favorable political conditions will dry up, and fast.

Without the unions forcing their captive members to pay dues which fund Democrat political candidates, that party can’t compete financially.

You hear over and over again about corporate fatcats who dominate American politics, right? Well, consider this chart showing who the major donors to federal campaigns are… 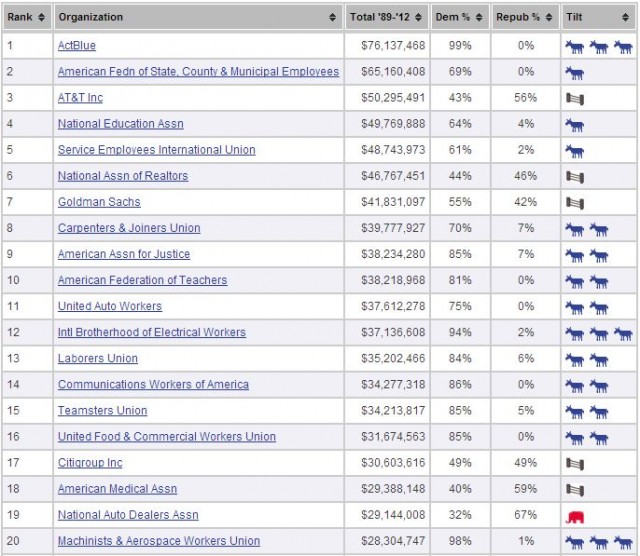 Of the top 20 political donor organizations since 1989, 12 of them are specific unions. And in virtually all cases, those unions are able to deliver Democrat political donations through compulsory dues collections. In other words, if you’re a machinist and you want to work in a factory in a non-Right To Work state you’re going to be forced to pay union dues which are then used to back Democrats for office – regardless of whether you’re a Democrat.

Force those unions to get members voluntarily, and watch how fast their political power falls apart.

The gravy train is about to fall apart. They know it. That’s why they’re turning violent.

UPDATE: Speaking of violence, here was Steven Crowder’s experience when the goons went after another tent put up by a pro-Right To Work group…

UPDATE #2: And here’s a longer video of the Battle of the Tent…

Meanwhile, Lansing’s mayor Virg Bernero, a certifiable union thug Democrat politician if there ever was one (he was throttled by Gov. Rick Snyder by a 59-41 count in the 2010 gubernatorial election in Michigan), congratulates the mob after the Battle of the Tent…

What’s significant about this? Well, back in March of last year when there was another left-wing temper tantrum outside the state capitol, Bernero was criticized for the failure of Lansing’s police force to show up and offer help to the Michigan state police as they provided security.

You’ll probably remember, if you watched the videos above, that Crowder was amazed at the complete lack of police presence at the scene of a riot.

A riot that Bernero praised as “beautiful.” How grotesque is that?

UPDATE #4: Turns out that the thug who cold-cocked Crowder is an IBEW member out of Grand Rapids, Michigan named Tony Cummings. Merry Christmas, Tony! Try not to slug the process server when he shows up – or the cops when they come to arrest you.

UPDATE #5: Surely the White House would step in to assure that cooler heads might prevail and exhort all parties involved to eschew violence amid a contentious legislative battle. Surely they would take such an essential step by way of leadership, right?

When asked by a reporter about a claim by Michigan state Democrat that “there will be blood” should Republicans pass a union-choice law in Michigan, Carney professed ignorance and then downplayed the comment.

“I haven’t see those comments, and I’m not sure they mean what someone interprets them to mean,” he said.

America elected and re-elected a president who has no problem with a South Korean rapper, for whose country 36,000 Americans died to save it from the horrors of Communist dictatorship, calling for the slow and painful death of the wives and children of Americans. America also elected and re-elected a president who can’t take even the minimal step of suggesting that rioters calm down over a legislative defeat for his side.

But of course he can’t do that since he exhorted the union goons to riot when he was in Michigan yesterday.

Interested in more national news? We've got you covered! See More National News
Previous Article SARGE: A Day Later, And Tom Vilsack Still Offends Me
Next Article FRANCE: The Kids Are Fighting Back Against The Muslim Invasion