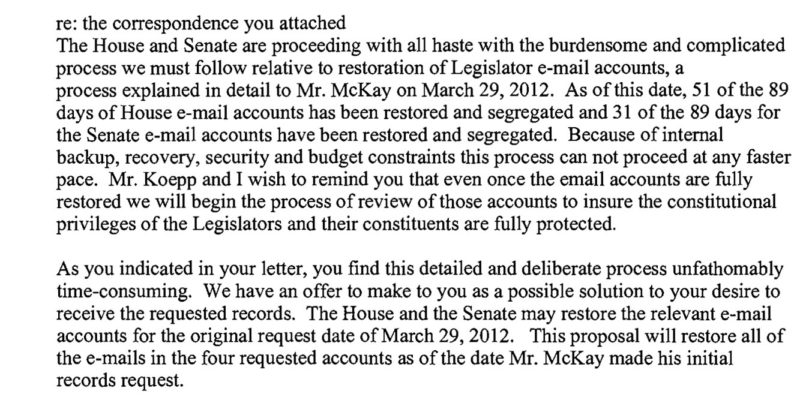 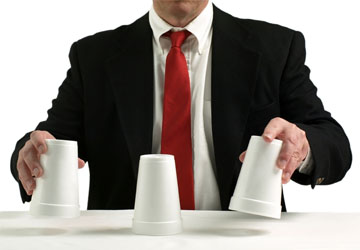 No, you won’t learn what you’re seeking to learn in the request itself. Don’t be ridiculous. That will take months.

What you’ll learn is exactly how much effort the people with a legal duty to service the public’s constitutional right to disclosure of public records will put into failing in that duty while concocting an excuse for that failure.

Yesterday, we went to court against Butch Speer, the clerk of the Louisiana House of Representatives, and Glenn Koepp, the secretary of the state Senate. Our business there was to secure a writ of mandamus against Speer and Koepp in order to force them to produce e-mail correspondence between State Reps. John Bel Edwards and Pat Smith and State Sens. Ben Nevers and Karen Carter Peterson on one side, and the four most prominent officials of the state’s teacher unions – Steve Monaghan and Mary Patricia Wray from the Louisiana Federation of Teachers, and Joyce Haynes and Michael Walker Jones of the Louisiana Association of Educators – on the other. We made that request because we were interested to see whether those teacher union bosses were, in fact, supplying the Democrat legislators in question with talking points – or more than that – to be used in the debate over Gov. Bobby Jindal’s education reforms.

A full rundown of the process which led us into court yesterday can be found here and here.

A writ of mandamus is basically a court action seeking to compel a recalcitrant public official to do something he’s required to do by law but is effectively or explicitly refusing to do. When you consider it’s been well more than eight months since we made the public request in question and we haven’t received a single document we asked for, you’d have to conclude this level of performance is tantamount to a refusal to satisfy the request.

You’d have to conclude that, right?

Anyway, this morning we received a package of exceptions filed by the Attorney General’s office on behalf of Speer and Koepp seeking to shut down our writ on the basis that a failure to produce the records we asked over the course of nearly nine months was not tantamount to a refusal to produce them, among other things. But included in that package was something rather curious… 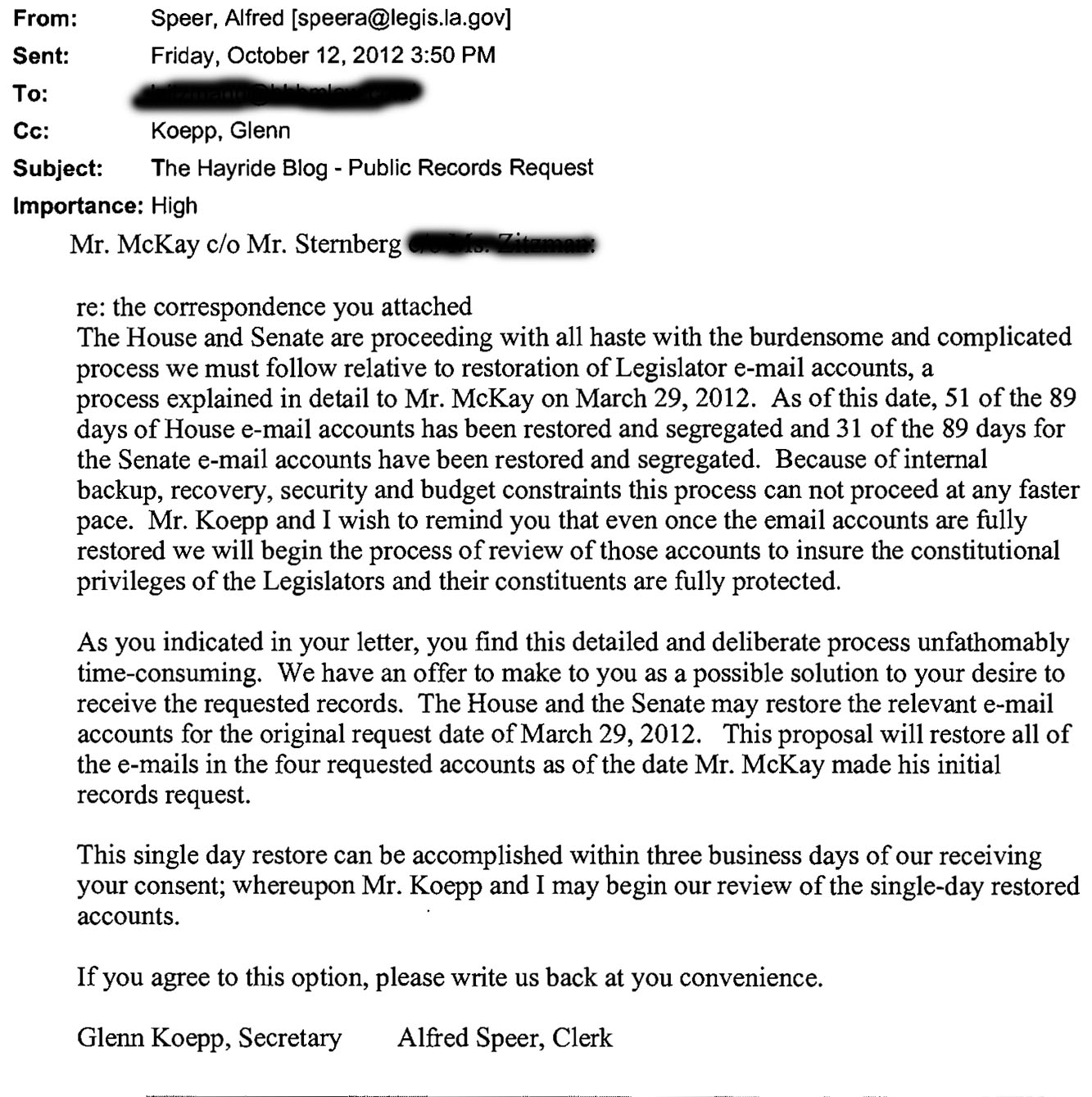 If you haven’t read the above links explaining the process here, we’ll make it simple and decipher this for you. When we made our request, we asked for “any and all” electronic and written communication between the legislators and union bosses in question. And what we got back from Speer and Koepp immediately after the request was that the way this had to be done was they would break out the computer tape they use to back up their e-mail server and run that tape to recreate the files. And to run that tape would take eight hours, and maybe the recreation would work and maybe it wouldn’t, and since there was no overtime available to devote to this project, it would take basically a work day to recreate every single day’s worth of e-mail records we we looking for.

And since the time frame we were looking for was 82 days, it would take 82 days to generate the e-mail records for Edwards and Smith in the House, and another 82 days to generate the records for Peterson and Nevers in the Senate. And after those records were extracted they would then go through them with the legislators in question and do some chin-stroking over how much of what was in there would fall under some legislative privilege or other (which we would probably fight, but that’s for another discussion). At some point after that, they would give us what we asked for.

This was, of course, asinine. The legislature’s e-mail servers were Microsoft Outlook systems; you could get any intern at the legislature to simply go through the inboxes, sent messages and deleted messages in the e-mail accounts of Smith, Edwards, Peterson and Nevers, sort them by sender or recipient, find the four union bosses in question and copy the e-mails.

Which was what we envisioned when we made the request.

And the public-records statute in question, LA RS 44:31, says the following…

A.  Providing access to public records is a responsibility and duty of the appointive or elective office of a custodian and his employees.

B.(1)  Except as otherwise provided in this Chapter or as otherwise specifically provided by law, and in accordance with the provisions of this Chapter, any person of the age of majority may inspect, copy, or reproduce any public record.

(2)  Except as otherwise provided in this Chapter or as otherwise specifically provided by law, and in accordance with the provisions of this Chapter, any person may obtain a copy or reproduction of any public record.

(3)  The burden of proving that a public record is not subject to inspection, copying, or reproduction shall rest with the custodian.

Yesterday was 266 days after our initial request. We waited 211 days before we sought the writ of mandamus.

In other words, when we requested those e-mails, the burden on Koepp and Speer was to find a way to get those records in as quick, cheap and easy a way possible. One could make the argument that based on what the statute actually says they needed to do so in a way that would have them to us within five days, even though we never pressed the issue in such a manner.

But before October 12, all they had offered as a possibility for responding to the request was this business of running the computer tape and restoring the server. In hindsight we might have specifically complained about their methods and just demanded they root the records out of Outlook like any normal person would.

But rather than overanalyze our part in this, let’s just say that to go there would be akin to saying that the guy who gets off a plane at LaGuardia from Jackson Hole, Wyoming and has never been to New York, and who catches a cab to his hotel without having specific instructions to the cabbie as to the route from the airport to the hotel, has no cause for complaint if he’s still riding in that cab six hours later with a route bringing him from LaGuardia to midtown Manhattan via Hoboken and Yonkers. If you’ve never actually seen the legislature’s e-mail system in action you have no way to specifically demand the method by which public-records e-mails must be produced.

The October 12 e-mail from Speer to us basically says that if we ask for a specific day, he can pull e-mails out of the inbox, sent message and deleted message folders for the legislators in question just like we originally envisioned, and suggested that might be a bit better method than the one he originally offered to us. Testimony at the hearing yesterday fleshed this out in full.

October 12 being, of course, six and a half months after we made the public records request.

Here’s the fun part. Neither I nor my attorney Scott Sternberg ever saw this October 12 e-mail until yesterday morning when the lawyers from the Attorney General’s office included it as an exhibit with their pleadings on our writ. It was sent to Sternberg’s secretary and not to either of us, and she says she never received it. I won’t accuse Speer of cooking this e-mail up after the fact until we have any evidence to indicate that, but for our part we find it fishy.

As all of this evidence played out in yesterday’s hearing, we came to the conclusion that this whole thing was a shell game. Speer and Koepp were playing the role of the meandering cab driver, presenting us with a sole option of the most wasteful, expensive, time-consuming and labor-intensive method imaginable of satisfying a public records request they were duty-bound to fulfill when they knew quite well that a far more efficient – and obvious – method was available to them. And they only made reference to that alternative six and a half months later in an e-mail no one on our side was even privy to until after we had filed a lawsuit – and when no response was made to the “offer” of October 12, neither Speer nor Koepp made any effort to reiterate it, follow up to make sure we had received the offer or anything else along those lines. They say they sent an e-mail, and that’s it.

Sternberg, halfway through the hearing, whispered to me incredulously that he though we were going to lose. He was amazed, but he said that this pantomime would probably be enough for Speer and Koepp to get away with their contention that gosh, they’re doing everything they can to comply with this request but it sure is hard and if we would just give them a little more time they’ll pull through for us – and look, see, they offered to do it the easy way but we just weren’t listening.

I said no way. Surely Judge Bill Morvant would see what was going on, recognize the shell game at hand, see that his job on the bench as laid down by public records case law and the statute in question was to interpret the public records law in a way most favorable to the requestor of those documents and tell Speer and Koepp “guys, this ain’t gonna fly. You knew you had an easy way to produce these documents, and you knew your e-mail system a lot better than somebody who makes a public records request, so your duty was to produce the records in the most facile way possible – and instead you chose to drag your feet. That’s not a good faith effort at supplying records according to the plaintiff’s constitutional right to see them, so it’s an effective refusal which you have no basis for and I’m going to grant the writ.”

But Morvant didn’t do that. He looked at everything described above and basically said it was reasonable. Maybe he’s right; at this point all we can do is throw up our hands. He did say he was denying the writ without prejudice, meaning that if there’s more evidence that Speer and Koepp are dragging their feet he’d be open to revisiting this question. As such the provenance of that October 12 e-mail might end up being more important than we imagine; who knows?

We’re not giving up on this public records request, though, and we’ll be recalibrating our approach later today. But we’ve gotten one hell of an education both on the lengths these people will go to not to do their jobs, a pretty solid reason to suspect that what’s at the end of the rainbow on our public records request might be some information a whole lot more interesting than we ever imagined (who would go through these elaborate contortions to protect a nothingburger?), and a good lesson on how persistent and aggressive one must be if one wants to actually keep an eye on what our elected officials are doing on the taxpayer’s dime.

Interested in more news from Louisiana? We've got you covered! See More Louisiana News
Previous Article BRIGGS: We Got Clean Ersters Here, Y’all!
Next Article BEAM: Will The Poor Get The Care They Need?