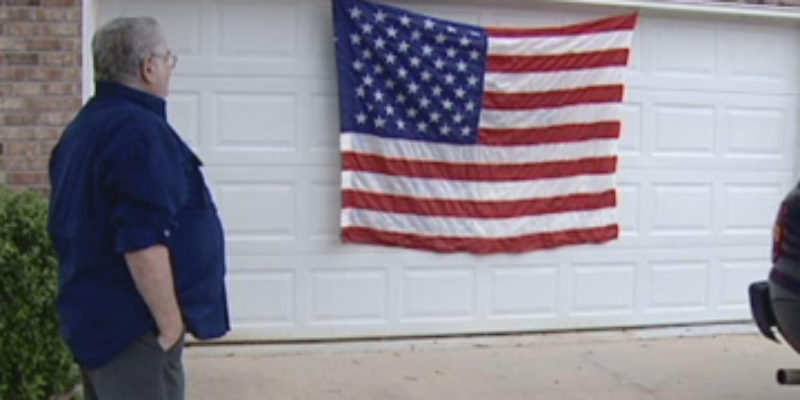 The only question we’ve got on this is why the property management company involved wasn’t named in the story. Sure, that’s an aggressive play – the publicity those guys would get out of folks knowing they have a penchant for writing up homeowners for flying American flags on their own property is likely to be really lousy for business – but it’s the number one thing jumping out at the viewer of this piece; who in the hell would go there?

The guess here is that somebody on that homeowners’ association board is one of these militant-lefty types – or at least a busybody petty tyrant without any strong political leanings (but we’ll go with the former because you’ve almost got to be a lefty to take on a veteran with an American flag) who decided have a go at their “redneck faux-patriotic” neighbors by buffaloing Community Management into writing Mr. Hogan up. And said militant-lefty boardmember is such a pain in the ass that the browbeaten rep working the Tallow Creek account said fine, if it’ll make you happy I’ll send him a letter.

Not realizing the hell he or she would bring down once Ashley and WWL got hold of this thing. And that property management rep is going to bed tonight worried about whether he or she will have a job past tomorrow as a result.

A good friend of mine completed a stint as the president of his homeowners’ association a few years ago with a great observation – namely, that this is where big government starts. It starts with the people who are so incapable of minding their own business that they go beyond the obvious things a homeowners’ association is set up to prevent, like the guy who keeps rusty washing machines and cars on blocks in his front yard, and before you know it it’s a big fight over so-and-so’s bushes and whether they’re not to the exact specifications in the bylaws or whether somebody else has a satellite dish that’s too big.

Or whether a guy has a flag on his garage wall.

And much of the time the bushes and satellite dishes and flags are really a cover for something else, like the fact that Boudreaux’s wife got snippy with Toussaint’s wife at last year’s HOA Christmas party, and Miz Toussaint got herself put on the board – which is easy to do, because nobody ever wants to serve in such a crap job and to get elected all you have to do is nominate yourself at the annual meeting most of the time – and then used her newfound power to exact revenge on Boudreaux’s wife.

My friend spent his entire stint fending off the busybodies and would-be tyrants who either couldn’t resist the temptation to guillotine their neighbors for minor aesthetic transgressions or bombarded him with grandiose ideas for neighborhood-wide Christmas decorations or gala-style social events paid for from the reserve account.

Which is not to say that Mr. Hogan’s “illicit” flag controversy is a cover for a personality dispute. It could be any number of things. We’re speaking in generalities here. And the point is there is always somebody who thinks they’ve got to run everybody else’s life, often with quite impure motives behind that poorly-controlled impulse, and very often that somebody will go to obnoxious lengths to become the lord of the neighborhood manor, so to speak.

The only way to put a cork in petty tyrants like that is to shame the hell out of them. Even if it doesn’t alter their behavior, it does have the disinfectant effect of making people remember who they are. And that’s a good thing, because the one constant about the petty tyrant types who would think it’s a quality move to write up one of their neighbors for flying an American flag is that they’re 10 times more likely to run for office than the average person. Give them some evidence to support the idea that they “get things done” by making the guy across the street trim his hedges to comply with the Association bylaws, and they’re off and running for the next school board election. Then the police jury. Then state rep. And God knows where else.

Before you know it, the petty tyrants become grand tyrants, and you wonder why in the hell they decided we need somebody to license all the florists in the state, or a ban on Big Gulps.

Nipping their BS in the bud by making sure everybody knows what a pain in the ass they are and how unfit they are to have power over their fellow man is a vital public service. Let’s call this political hygeine at the grassroots level, if you like.

Without question, most of these people are Democrats. “Progressive” leftism is a philosophy which attracts folks like these like horse manure attracts flies. But they’re not all Democrats. Some are Republicans. And that’s a problem.

The good news is that Ashley probably put a big dent in the problem at Tallow Creek by dropping a TV camera on it. While this seems like a small story, it’s a microcosm for a lot of what’s wrong out there. So kudos to her for that.