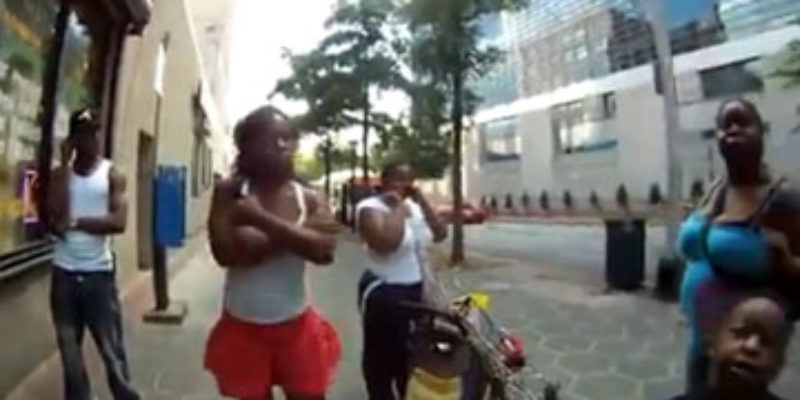 The language in this isn’t safe for work – that is, if you can make out much of what’s being said, which you probably can’t.

A bit of context here: this happened at a strip mall in Atlanta, outside of a mailing/shipping place in a lousy neighborhood. A pair of mothers with children in tow became disruptive, and the security guard demanded that they leave.

That’s when a display of the character that defines the dregs of American society began. In technicolor. Welcome to the Great Society, 47 years in…

Here’s a question: how is there going to be economic growth in “inner city” neighborhoods when this is what you have to go through just to keep order in your establishment? The security guard has to tase one of these harridans for his own personal safety, after a great deal of buildup to that point. And after he does, he’s accosted by an individual who played zero part of helping to defuse the situation in advance but who is now irate at the ungentlemanly behavior the guard displayed toward his sex partner.

The answer is there isn’t going to be economic growth in those neighborhoods. People serious enough about their livelihoods to put their resources at risk in a business are not going to put themselves through that sort of hassle.

And bear in mind that there are no white people in this video. This is not a racial thing. This is a cultural thing. The security guard is an honest, productive American; those he is confronted with are something less.