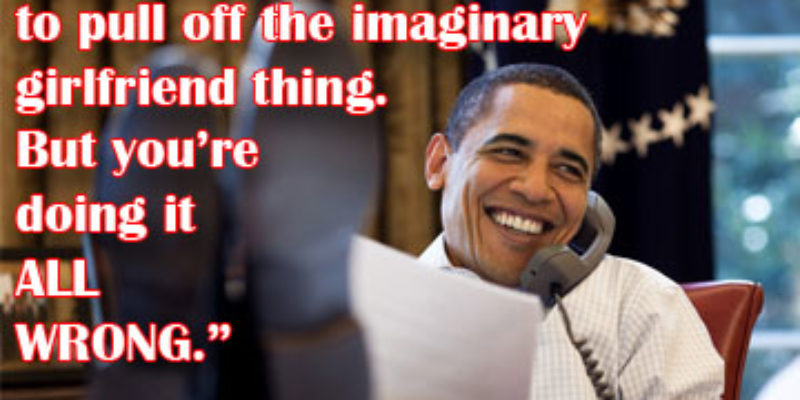 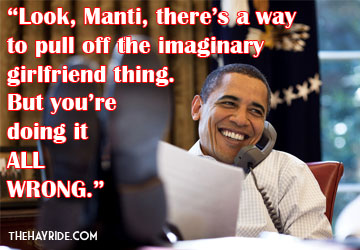 Except for this. You realize that this is a goofy 22-year old kid with some linebacker skills, a Twitter account and a bunch of Hawaiian tattoos on his arm, and he took the national media for a nine-month ride with a hoax about a dead girlfriend.

The media rubes who got shredded by Te’o and his imaginary squeeze – a hoax he ran on them in an effort to hook himself up with a Heisman Trophy, something he came kinda close to doing – aren’t the same media rubes who cover national politics. But do you really think there’s a big difference in quality between the reporters who work at ESPN and the reporters who work at ABC News?

Let’s face it. It doesn’t take a whole lot of research into those two autobiographies Obama wrote before you recognize almost nothin’ he said about himself is the real McCoy. Obama had an imaginary girlfriend too – or at least a “composite” girlfriend. And you know pretty well that they’d have picked a Mitt Romney or Sarah Palin autobiography clean to find every lie or fib or dopey statement under the sun. But they did nothin’ of the sort where Obama was concerned, and they let a dude who’s an outright fugazi – and a pretty dangerous one at that – get the White House.

Of course, now Te’o and Notre Dame are gonna get blown up by the sports media – and the national media, too – for makin’ the stupid case that Te’o got taken in by a hoax. Nobody’s gonna believe that crap, and you can bet the media is going to uncover proof that’s BS. And Te’o and Notre Dame are gonna end up bein’ laughingstocks, or worse, for tryin’ to play the public for fools.

Me, I couldn’t care less about Mati Te’o havin’ a fake girlfriend. That’s his problem. But I do kinda have an issue with Obama tellin’ lie after lie about his background and havin’ the media lie for him in backin’ him up.

The media’s supposed to be about gettin’ at the truth, rather than givin’ a megaphone to carnival barkers and hucksters.

But Al Sharpton’s a member of the media now, so that should tell you somethin’ about where we are.

Interested in more national news? We've got you covered! See More National News
Previous Article SARGE: A Clarification From A Cop On The Beat
Next Article BAYHAM: Can The Great Divider Unite America?