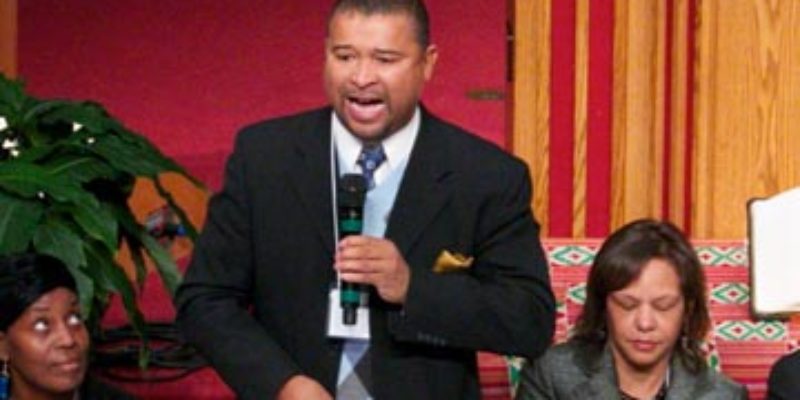 We posted about McKinley the first time after a video of him trashing the Democrat machine in Chicago at a campaign forum surfaced on YouTube.

But the Republican who’s running in the special election to replace Jesse Jackson, Jr. in Congress is at it again, and back on message…

We love this guy.

Can he win? Probably not. He might win the GOP primary – he’s one of five candidates in that field – but the guess is one of the 17 Democrats running for the seat will beat him handily in the general.

On the other hand, it’s a special election – so it’s likely a lower-turnout election. And this guy’s message and his passion might begin building a core of support that enables him to win a race like that.

As we said the first time we talked about him, we need an army of insurgent candidates like Paul McKinley, who will look at the daunting odds facing conservatives in black neighborhoods (and other minority areas) and say, as Gen. Anthony MacAuliffe told the Germans when they surrounded him at Bastogne and demanded his surrender, “Nuts.”

McKinley’s willing to call out what he calls The Machine. What it really is is the Democrat establishment that doesn’t just run Chicago but most of the inner cities.

George Patton, who came to MacAuliffe’s aid and relieved the siege at Bastogne, supposedly heard the “Nuts” comment and said “Any man who is that eloquent deserves to be relieved. We shall go right away!”

We need an army of insurgent candidates like Paul McKinley because it’s going to take black conservatives willing to call out that establishment and force the public in those districts to re-examine what they’ve been voting for. White guys from the suburbs can’t do it, because the black community has been poisoned for decades by the establishment to the extent that they’re racist, that they’re behind the drug trade, that they’re out to kill blacks or deny them education or whatever.

None of that is true. In fact, it’s a complete lie. The Democrats are the ones who have done those things while getting a monolithic black vote. But without a black vote speaking truth to power – a guy like McKinley – you’ll never move the needle.

At least there are people recognizing this. David Horowitz, the great unveiler of the Left, has put out a strategy pamphlet discussing how the Republicans can delegitimize Democrats in their own base constituencies, and what he writes in there is exactly correct. The pamphlet, entitled “Go For The Heart,” can be viewed here. But a terrific excerpt about the black community reads as follows…

Defending the victims of job destroyers is morally and emotionally stronger than defending rich “job creators.” It creates sympathy and arouses anger. It inspires concerns about justice. It’s how the Democrats’ recruit and energize their troops. It’s the way—the only way—Republicans can neutralize the Democrats’ attacks on them as defenders of the rich, and return their ﬁre: by framing them as the enemies of working Americans and the middle class.

During Obama’s four years in ofﬁ ce, African Americans – middle-class African Americans – lost half their net worth as a result of the collapse of the housing market. That’s one hundred billion dollars in personal assets that disappeared from the pockets of African Americans because of a 25-year Democratic campaign to remove loan requirements for homebuyers. Yet in the 2012 presidential campaign, Republicans were too polite.

The ﬁngerprints of Barack Obama, Jimmy Carter, Bill Clinton and Barney Frank were all over the subprime mortgage crisis. The campaign to remove loan requirements for African American and other minority borrowers started with Jimmy Carter’s Community Reinvestment Act. It snookered thousands of poor black and Hispanic Americans into buying homes they couldn’t afford, which they then lost. How traumatic is the loss of one’s home? By securitizing the failed mortgages, Democratic bundlers on Wall Street who had poured $100 million into the 2008 Obama campaign made tens of millions off the misery of those who lost their homes. In other words, with the help of Clinton, Frank and Obama, Wall Street Democrats made massive proﬁ ts off the backs of poor black and Hispanic Americans. But Republicans were too polite to mention it. Here was a missed opportunity to neutralize Democrat attacks on Republicans as the party of the rich and exploiters of the poor. It was an opportunity to drive a giant wedge through the Democratic base.

The bottom line is this: If Republicans want to persuade minorities they care about them, they have to stand up for them; they have to defend them; and they have to show
them that Democrats are playing them for suckers, exploiting them, oppressing them, and proﬁting from their suffering.

Large populations of the African American and Hispanic poor are concentrated in America’s inner cities – Detroit, Chicago, Philadelphia, St. Louis, Harlem, South Central Los Angeles. In these inner cities the unemployment rates are off the charts, the school systems so corrupt and ineffective that half the children drop out before they graduate and half those who do graduate are functionally illiterate. They will never get a decent job or a shot at the American dream.

In these inner cities, every city council and every school board and every school district are 100% controlled by Democrats and have been for more than 70 years. Everything that is wrong with the inner cities and their schools that policy can affect, Democrats are responsible for. Democrats have their boot heels on the necks of millions of poor African American and Hispanic children and are crushing the life out of them every year. But Republicans are too polite to mention it.

In the middle of the 2012 campaign, a teachers union strike shut down the schools in Chicago, Obama’s home town. The issue was not pay but the union’s refusal to allow teacher rewards to be connected to teacher performance. African American and Hispanic children were the true victims of the determination to protect bad teachers and not to reward good ones. Yet Republicans ignored the strike, and never put a face on its victims.

At the Republican convention, one keynote speaker referred to the teachers unions and the issue of teacher rewards and union obstruction. This was Governor Chris Christie, probably the most aggressive and articulate Republican warrior. But here is how Christie framed the Democrat/union atrocity:

“We believe that the majority of teachers in America know our system must be reformed to put students ﬁrst so that America can compete…. We [Republicans] believe that we should honor and reward the good ones while doing what’s best for our nation’s future — demanding accountability, higher standards and the best teacher in every classroom.

And that’s all he said. The issues are there – accountability, standards and rewards for teacher performance. The policy is there. But the moral outrage is missing. The victims are missing and the culprits aren’t named. It’s not the “educational establishment” that’s ruining the lives and blocking the opportunities of African American and Hispanic children. It’s the Democrats – they are the educational establishment in every failing public school district.

The Democrat teachers unions and the Democrat Party that supports them are destroying the lives of African American and Hispanic students whose parents are too poor to put them in private schools – the same private schools where Democrat legislators and union leaders send their own children.

Democrats will ﬁght to the death to prevent poor parents from getting vouchers to provide their children with the same education that well-heeled Democratic legislators provide for theirs. This is a moral atrocity. This is an issue to get angry about and mobilize constituencies over. This is an issue that could drive a Gibraltar-size wedge through the Democratic base.

But Republicans are too polite to do that.

This is merely the most obvious atrocity that Democrats are committing against America’s impoverished minorities. Subverting family structures through a misconceived welfare system, encouraging food stamp dependency, providing incentives to bring into this world massive numbers of children who have no prospect of a decent life just to earn a welfare dollar. These are the corrupt fruits of Democratic welfare policies which are spiraling out of control. Republicans criticize these programs as “wasteful.” They need to start attacking them as destructive, as attacks on the human beings who 35are ensnared by them.

The way for Republicans to show they care about minorities is to defend them against their oppressors and exploiters, which in every major inner city in America without exception are Democrats. Democrats run the welfare and public education systems; they have created the policies that ruin the lives of the recipients of their handouts. It’s time that Republicans started to hold Democrats to account; to put them on the defensive and take away the moral high ground, which they now occupy illegitimately. Government welfare is not just wasteful; it is destructive. The public school system in America’s inner cities is not merely ineffective; it is racist and criminal.

Horowitz has much more. Read the whole thing.

The message is there. What’s needed is to recruit messengers and to give them the resources to carry that message relentlessly.

Will they win elections? Not for some time. Embarking on something like changing the face of the black vote in this country is a very long-range project. But the good news is that you don’t have to win to make a difference.

What then is that Democrats won’t win many more elections. They can’t win the presidency anymore, and in a lot of states like Michigan, Pennsylvania, Virginia, Florida and Ohio they’ll be finished in statewide elections. When they have to start earning votes rather than just getting them wholesale through identity politics, they’re finished.

Exit question: what share of the resources Karl Rove and his Establishment GOP donors amass for the next couple of election cycles will go toward relieving Bastogne? Or will Rove just drop TV ads to soccer moms in the suburbs from 30,000 feet in order to gin up media buying commissions like he did last year?