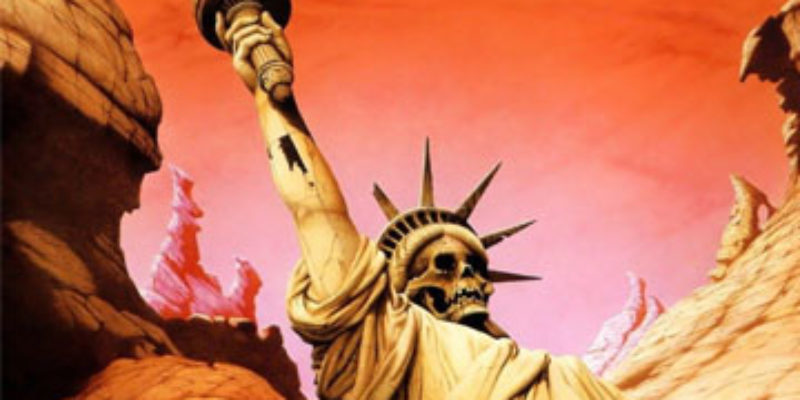 Stephen Gutowski: “Just tried driving but since sequestration went into effect the roads have all crumbled into dust.”

Brendan Loy: “OH MY GOD THERE ARE GOVERNMENT WORKERS SPONTANEOUSLY COMBUSTING ALL OVER THE PLACE, THIS IS HORRIBLE, PLEASE MAKE IT STOP” He added, “BREAKING: CALIFORNIA DECLARES WAR ON OREGON; KENTUCKY LAUNCHES SNEAK ATTACK ON TENNESSEE. MASS CHAOS.”

Jonah: “It wasn’t until I ate my neighbor’s pancreas that I realized president Obama was right about the sequester.”

Iowahawk: “The corpses are piling up outside my window like cordwood, oh my God the humanity.”

Sebastian: “Nothing to worry about! I grabbed my double barrel shotgun & blasted #sequester through the door, just like the VP said.”

Becket Adams: “I don’t think my neighbors are taking sequestration seriously. They’re giving me weird looks and making fun of my war paint and loincloth.”

Exurban Jon: “So this is what anarchy feels like . . . From now on, I shall be known as ;ExJon, Warlord of the Western Deserts.'”

Brandon Morse: “The #sequester may now join the Mayan Calendar and the Y2K bug in the “[Stuff] Everyone Survived” Hall of Fame.”

By morning, it was even worse:

Rick Wilson: “A few hours of fitful sleep, the sound of sirens and screams of the victims of the Barackolypse rending the night air . . . I saw their fires in the dark, savagery swiftly tearing away the thin veneer of civilization only government diversity programs provided.”

We thought we’d add our own observations…

But it’s worse than that…

Can there be a hero somewhere? Someone who can save us from ourselves?

One can always hope…

OK, maybe not that guy. Maybe this guy?