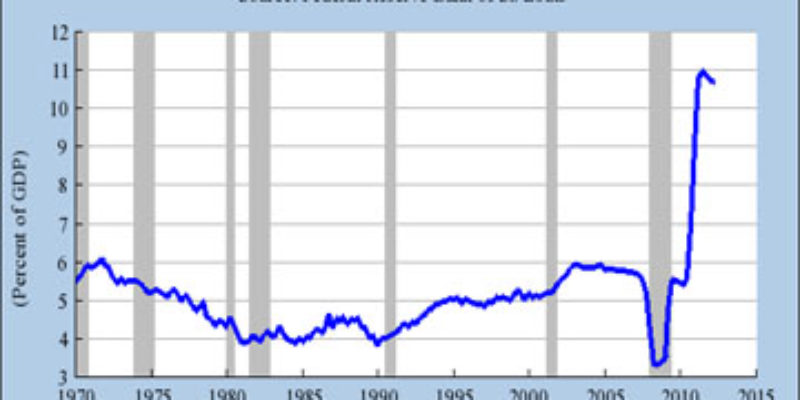 A rather astonishing set of data from Zero Hedge, on the occasion of the Dow returning to its 2007 pre-crash levels…

By virtually every measure, the economy is worse off than it was the last time the Dow sat above 14,000.

And on Wall Street, as ZH notes, there’s a certain “we’re going to make whatever we can before the bubble bursts” attitude prevalent at present – which means that when the markets begin to tumble they’ll tumble VERY quickly as the smart money will recognize the value of getting out quickly. Stanley Druckenmiller, CEO and founder of Duquesne Capital, laid it out perfectly this morning – as soon as people begin recognizing that free money from the Fed subsidizing the investor class isn’t producing tangible economic growth and the asset values inflated by that free money can’t be sustained forever, look out below.

Meantime, even USA Today knows that the Fed is driving the Dow to its current heights and can’t continue doing so.

To combat the Great Recession, the Fed has bought trillions of dollars of mortgage bonds and U.S. Treasuries to juice the housing market and the economy in general.

On balance these purchases — which go by the non-threatening name of “quantitative easing” — have been warranted, given the deep economic problems caused by the financial crisis. But the time is approaching to scale back the bond-buying spree and get ready to unwind some of the Fed’s massive portfolio, which now tops $3 trillion. The longer the policy lasts, the more likely it will end unhappily.

The Federal Reserve’s purchases have driven interest rates to near zero. This has stimulated the economy but not without cost. Savers, particularly older ones trying to live on income from their investments, are starved for safe options. They’ve been forced into stocks, which is one reason the market has been acting as if it’s on steroids. Further, with borrowing costs low, Congress and the White House have less incentive to rein in the national debt. Rock-bottom interest rates have also distorted markets.

The best indication that the Fed’s bond-buying purchases are pushing stocks up artificially is that investors run for cover whenever there is a hint that the Fed might change course, as happened recently. On Monday, billionaire superinvestor Berkshire Hathaway CEO Warren Buffett told CNBC that markets are on a “hair trigger” waiting for signs of change from the Fed. The market is “hooked on the drug” of easy money, Dallas Fed President Richard Fisher told Reuters.

Fisher’s comparison of Fed policies to a drug is apt. Markets might not like the idea of the drug being withdrawn now, when the Fed holds a portfolio of $3 trillion. But the withdrawal symptoms will be a lot worse once the portfolio grows to $4 trillion, or more.

No one has a clear idea how the Fed plans to unload such staggering sums. As it sells off its hoard, the value of all bonds could plunge, more than wiping out the small returns bond investors are getting. But holding onto the bonds as the economy stabilizes would set off inflation, which the Fed is required to combat.

What USA Today won’t tell you is that the Fed’s bond-buying hasn’t averted a depression. We’re in a depression. It might not feel like one, because people aren’t starving in the streets or living in cardboard boxes. But the only thing keeping that from happening is food stamps for 50 million Americans, federal bureaucracy slowing down foreclosures. Free stuff from the government.

The economy isn’t growing. It’s dead. It’s being kept alive by the federal government spending money borrowed from the Fed at a practically-zero interest rate. Meanwhile the private sector is moribund; large companies make big profits but chose not to grow, and small companies are shrinking and dying. And there are no new companies.

And another downgrade is coming, because even though federal tax revenue is going to hit a record $2.7 trillion this year we’re still borrowing money like there’s no tomorrow. Those “draconian” sequester cuts don’t even make a dent in the federal deficit, and the ratings agencies know it.

So how does this play out?

We have a president whose response to the sequester is to let criminals out of prison, threaten to fire janitors on Capitol Hill, cancel deployments of aircraft carriers and threaten the jobs of cops and teachers the federal government doesn’t even pay. This from a “budget cut” which doesn’t even reverse the growth in government.

And it’s a lie anyway, as the federal government is still hiring. And spending $50 million on new uniforms for TSA officers who supposedly won’t be able to do their jobs because of the sequester.

“Congressional leaders are normally behind-the-scenes people. … They are really not normally the leading spokesman on the issues. … That’s really a presidential job,” Hume said. “President Obama’s behavior in this business about the automatic budget cuts — this itself is the most peculiar behavior I have ever seen by a president.”

“A normal president would be trying to reassure the public that this, after all, is not a large sum of money compared to the budget overall…The president seems prepared to let the public suffer almost as much as possible, as long as he can blame somebody else. This is not what we expect of presidents. Presidents in the end are supposed to be the people who put their big boy pants and prepare to shoulder responsibility. … It’s very unusual for a president.”

Anyone can see that Obama’s focus is solely on beating the Republican Party and driving them out of a House majority; governance be damned. The country is slowly burning as a result, but that flame will continue to grow, and, untended, it will get out of control.

What happens when it does? It’s unlikely that the Democrats can retake the House in 2014; there are simply too many Republican districts and the country is too polarized for a scorched-earth political campaign to hit paydirt. And when the investor class is taken to the cleaners, which will happen when the Dow goes kabluey, what then?

Do we come to the point where everything collapses? Does the economy fall apart?

The Fed is underwriting three-quarters of the federal deficit at present. It cannot go on doing that for long. At some point we hit the debt limit – not the fake debt limit Congress votes to raise every few months, but the real debt limit that comes when there is simply no more money the federal government can borrow at any interest rate.

So enjoy the good performance of your stocks today. But be ready for anything, because the current rally won’t last, and when it goes the ride will get far rougher than it’s been even in the last few years.