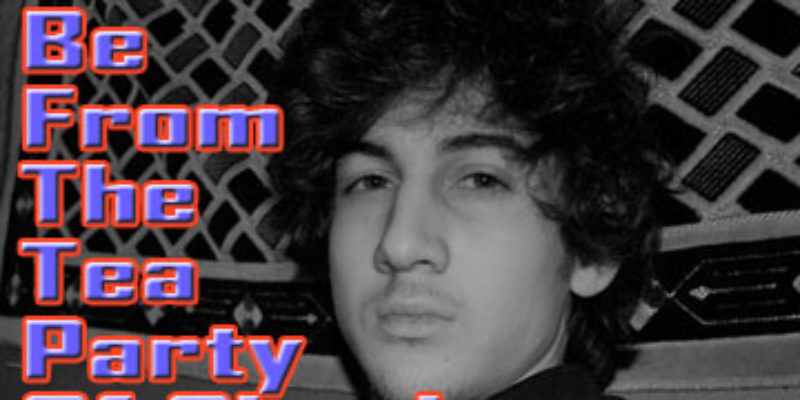 We’ve filled up the Low Popahirum section with headlines about the two Chechen Muslim terrorists who blew up the Boston Marathon on Monday and got into a running gunfight with police in Watertown, Massachusetts last night and into this morning.

And we’ll continue to do that as this wild scenario plays out.

So this post won’t have a whole lot of new material in it. Just observations.

1. At this point it’s trite and stupid for all the people who knew the Tsarnaev brothers (Tamerlan, named for a brutal Muslim warlord and conqueror who slaughtered innocents from China to Turkey in the millions during the 15th century, and Dzhokhar, named for the leader of the Chechen rebel government which began a 10-year bloody civil war against the Russians, to include the Beslan school massacre) to talk about how nice a couple of kids they were and how impossible it is for them to be involved in this.

So we’ll spare you all the discussions of that.

The money quote on the older brother, Tamerlan, is this: “I don’t have a single American friend. I don’t understand them.”

He was a Golden Gloves boxer, though, and he’d had a “beautiful” half-Portuguese, half-Italian girlfriend who he’d convinced to convert to Islam.

How he convinced her is a question, given that he’d had a conviction for domestic violence. Not sure that was related to the swell Mediterranean looker in question. But he was subject to deportation for that, and naturally wasn’t deported.

Oh, and there’s a little extra…

Adding insult to injury, the other bomber, little brother Dzhokhar Tsarnaev, was rewarded with American Citizenship on September 11, 2012 in Boston, according to JW’s source. The 19-year-old, who is still on the run, was granted asylum in Arlington Virginia on September 27, 2002, JW’s source reveals.

2. We don’t know how these two became jihadist terrorists, though Tamerlan Tsarnaev’s YouTube page was full of videos containing material from someone named Feiz Muhammad, a Lebanese cleric who hung (or maybe still hangs) his fez in Sydney, Australia. This Muhammad character is an atrocious piece of work…

Widely known as ‘Sheikh Feiz’, the preacher was born in Australia circa 1970-1 but fled to Lebanon, the homeland of his parents, eight years ago after becoming one of the world’s most controversial Islamic lecturers.

He has been investigated by Australian police for inciting violence and terrorism, and was even captured on a British TV documentary encouraging children to become martyrs for Islam six years ago.

Feiz has been described by some as Australia’s most dangerous sheikh, because of the number of connections he holds to known terrorists.

Although it is not known whether the hardline sheikh has any direct links to Al-Qaeda, he has regularly broadcast sermons from the group’s spiritual leader, Anwar al-Awlaki, on his website.

Feiz’s parents emigrated from Lebanon to Sydney before he was born, and he has described his family as “so-called” Muslim – hinting strongly that he disapproves of their level of commitment.

The future preacher competed as a boxer, bodybuilder and horse trainer in his teens, and apparently used drugs before rediscovering his faith and moving to Saudi Arabia, where he studied Islamic law.

Upon his return to Sydney, Feiz founded the Global Islamic Youth Centre in the suburb of Liverpool, reaching a community of more than 4,000 Muslims, and began to make the radical sermons which have earned international notoriety.

In 2007, a Channel 4 documentary entitled Undercover Mosque broadcast footage of Feiz urging children to become “soldiers defending Islam”, adding “there is nothing more beloved to me than wanting to die as a Muhajid.”

In 2010 he described Dutch politician Gert Wilders, an open opponent of Islam, as “evil filth” adding: “Anyone who mocks our learning, laughs at the Islam [sic] and degrades it must enter death – decapitate him, cut off his head.”

The guess is, though, that once law enforcement finds out what mosque in Boston these kids attended they’ll get a pretty good blast of vicious jihadism, and it’ll have been paid for by the Saudi government.

The mother of the two Chechnyan brothers suspected of setting off two bombs at the Boston Marathon was arrested last year for allegedly stealing $1,600 worth of clothes from an upscale department store.

Zubeidat K. Tsarnaeva, 45, was charged with two counts of malicious/wanton damage and defacement to property after allegedly swiping the merchandise from a Lord & Taylor in Natick, Mass. in June 2012.

She stole $1,624 in women’s clothes, according to a Patch.com story.

Meanwhile, the father told ABC News that if the cops killed his younger son “all hell will break loose.”

4. What’s the biggest “shaking my head” moment? It comes from last night when the duo carjacked someone in Watertown. Here was the car…

Did you spot the “Coexist” bumper sticker? Don’t put one of those on your car, if for no other reason than that when Muslim terrorists are looking for someone to victimize they’ll know you’re an easy mark and that you’re not armed.

5. We’re also not going to gloat over the stupidity and discreditation of the lefties at MSNBC and elsewhere who have so beclowned themselves in the coverage of this thing. We’ll just offer this as a pretty good example…

6. It ain’t us, says Chechnya’s president…

Ramzan Kadyrov, Chechnya’s Russian-backed president, issued a statement this morning to say that the suspects’ heritage is not to blame for their actions because they were raised in the United States.

“Any attempt to draw a connection between Chechnya and Tsarnaevs — if they are guilty — is futile,” he said. “They were raised in the United States, and their attitudes and beliefs were formed there. It is necessary to seek the roots of this evil in America.”

7. We’ll say this, though. We really like Uncle Ruslan…

More as this continues.

Interested in more national news? We've got you covered! See More National News
Previous Article You Won’t See Much Coverage Of The Ricin Mailer In The News
Next Article UPDATED: An Ironic Tweet From Dzhokhar Tsarnaev…