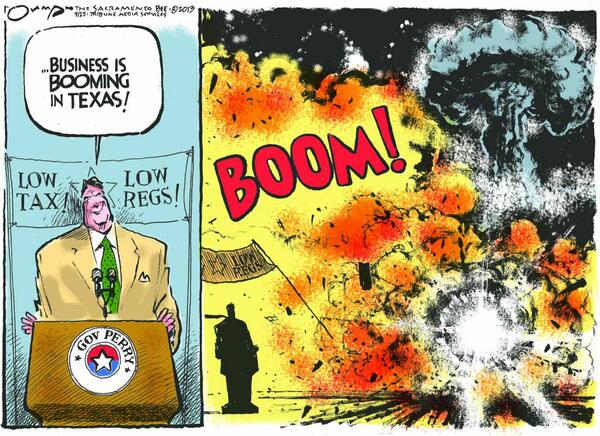 Is there nothing the Left won’t attempt to profit by politically?

You saw how shamelessly they went after gun control following the Newtown shootings. And you saw the way they went all-out in an attempt to pin the Boston bombings on the Tea Party.

Forget about the total lack of class inherent in using the dead bodies in West as political pawns. This is pure opportunism and blamecasting.

And when the reaction to the cartoon hit – and it was furious – Ohman stopped drawing and started writing.

Or should we say, shoveling…

The cartoon we’re discussing is rather sanitized, honestly. It shows an explosion. It plays off the word “Boom/booming.” That’s obviously the problem. Would I do it again? Don’t know. I knew it was close to the edge, but I went with it, and I don’t go with things I can’t defend. I’m defending this one because I think that when you have a politician traveling across the country selling a state with low regulatory capacity, that politician also has to be accountable for what happens when that lack of regulation proves to be fatal.

That’s exponentially more offensive to me.

My job, as I understand it, is to be provocative. I provoke, you decide. I don’t dictate, I put out my opinion along with everyone else. I sign my name. I own it. In my opinion, I could have gone further. Much further.

Does this cartoon disrespect the victims? Their families?

Well, if someone, say a Texas regulator, had picked this up before 2013 but after 2006, maybe I wouldn’t have had to draw that cartoon. No victims, no grieving families. So my rather pointed view of all this would be moot.

Gambling with the lives of innocent people is much more offensive to me.

As if Ohman could give a damn about the people who died or lost their homes in that explosion.

In his op-ed he brags about previous cartoons he’s drawn which portrayed the children of Newtown as the new face of the NRA (which is ironic, because the NRA’s proposal to place armed guards in schools, had it been in place at Sandy Hook Elementary, would likely have saved many if not all of those children), and which portrayed an Iraq veteran whose head was wrapped in bandages wondering “who had to invade Iraq to save face.”

And refuses to apologize for any of his ghoulish cartoons.

The hateful, boorish behavior of so many of these “journalists,” and the apparent free rein they get from the irresponsible management of the newspapers who employ them, isn’t just why print media is dying; it’s why public discourse is descending into darkness.

Ohman thinks he’s being provocative. He’s not. He’s a ghoul. And he ought to be out of a job by Monday.