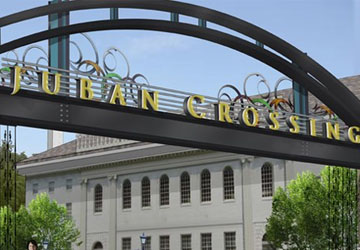 The Livingston Parish courthouse gang, and their favorite senator Dale Erdey, are up in arms about Gov. Bobby Jindal’s veto of Erdey’s bill to create a taxing district to fund land improvements to support a shoppping mall.

The mall in question, Juban Crossing, would be built along I-12 in the eastern part of Livingston Parish. It’s a longstanding project which hasn’t been built to date because the developer doesn’t seem to have the funds to complete it, and for some reason Livingston Parish doesn’t seem to be interested in funding the project with its own resources. So for the last two years Erdey has taken the project to the Legislature and managed to pass a bill that would pump $45 million into roads and drainage around the development.

Specifically, Erdey’s bill would create the Juban Crossing Economic Development District Fund, and one percent of the state’s four percent sales tax would be diverted out of the state coffers into the fund until the $45 million is paid off.

The long and short of that is Erdey, who’s no stranger to dumb legislation he can get through the legislature, wants your tax dollars to fund a shopping mall in his district. Yes, those dollars would be generated within his district, but money is fungible. When you dry up $45 million out of the state’s general fund that would otherwise be spent on LSU or Louisiana Tech, or the Minimum Foundation Program, or highway maintenance north of Grand Isle, those are your tax dollars.

And the legislature said it was OK to do so, and that’s hardly a surprise, because if you’re a state senator or state rep who might have real estate developers looking to plop down a project in your district and you vote against Erdey’s bill, two things will happen. First, that developer will lavishly fund your opponent in the next election. And second, when you try to get funding for your project from the legislature, Erdey or folks like him will make sure to kill it in retaliation for voting against his pork bill. It’s not worth the trouble, so you take the path of least resistance and pull the lever for Erdey and his millions of your constituents’ dollars.

But from Jindal’s perspective, funding a local real estate development, and in particular a shopping mall, with state tax dollars isn’t a great idea.

First, brick-and-mortar retail ain’t the investment it used to be. Brick-and-mortar stores are a declining portion of the retail trade, as more and more of it moves online. Where the floor for that market movement might be, nobody really knows. It’s possible that almost no shopping malls ultimately survive the evolution, and that makes any new mall – not just Juban Crossing – a lot riskier investment than it used to be. Which might be one reason why the Juban Crossing developers haven’t secured the private financing to get their project off the ground to date.

Second, Juban Crossing is in the middle of nowhere. A map… 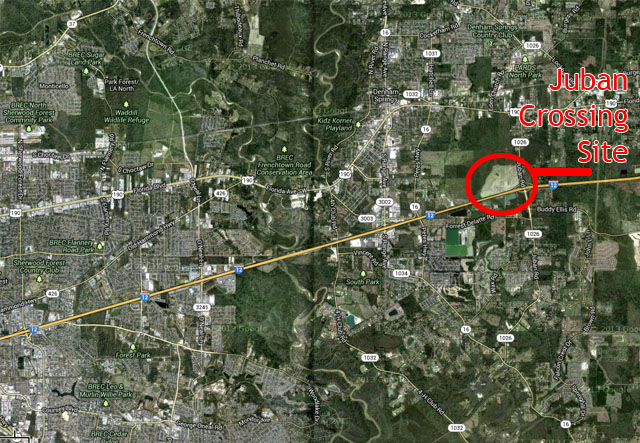 You’ll notice that it would be a major hike for folks in the eastern part of Baton Rouge to get there, and it’s a bit east of the more populated parts of Denham Springs. Nothing much exists where this development is planned; what that means is the developers expect to plop down a ton of residential real estate nearby and turn the area into a happening part of town.

Not that this can’t be done. It’s done all the time. It’s usually done with private dollars, or if there are roads and drainage to be laid down by the public sector that’s done by local governments.

Erdey wants the state to pay for it.

Third, nobody has quite explained why people in St. Tammany Parish, or West Baton Rouge, or Ascension, or Tensas, would be interested in paying for this thing to be built. The plans the developer has laid down about Juban Crossing make it look like a really nice development, but not something that would draw people from Mississippi or Texas or Arkansas or Alabama. Meaning that if Juban Crossing were to be a draw, it would be a draw from surrounding parishes.

There are only so many retail dollars out there. If Juban Crossing is a nice enough place so as to steal them away from the Mall of Louisiana in Baton Rouge, or Hammond Square Mall in Hammond, then that’s great for Juban Crossing and Livingston Parish. It’s not so great for East Baton Rouge or Tangipahoa Parishes, who lose sales tax revenue as a result. And while it’s a perfectly defensible function of the free market that if Juban Crossing is a nice enough place folks would rather shop there than some of the other options in the southeastern part of the state, asking the state to pick up the tab for it is tantamount to asking taxpayers in East Baton Rouge or Tangipahoa to pay to facilitate the loss of their own local governments’ revenues.

Fourth, going back to the first question – if this project goes down the tubes, what does the state get for having given up $45 million in state sales tax revenues to put in roads for a dead chunk of real estate? Not a lot.

All things considered, we owe some thanks to Jindal for this veto. He carried Livingston Parish by wide numbers in 2011; for two years in a row he’s resisted the temptation to reward those voters by making the state – and by extension the taxpayers – into suckers for Livingston to cut corners on its own economic development costs.

Nobody’s saying this project can’t be built. Here’s hoping it does get built. But the developer and the local government there need to cough up for the costs of the infrastructure and stop trying to make the rest of us pay for it. And if that $45 million is too much of a bond for Livingston to float to get that work done, then that ought to be the end of the analysis.

But Jindal is being villified by the Livingston Parish crowd today. They’re complaining that the state backed the project to bring an IBM facility to downtown Baton Rouge, and this shows Jindal hates Livingston. Of course, the IBM project involved bringing investment in from outside the state and also bringing jobs  – high-paying jobs – to the area in an industry it doesn’t currently have much of.

None of that matters to the president of Livingston Parish…

Ricks ought to get off his rear end and float his own sales tax levy to fund that project. Whining that Jindal did his job and protected Louisiana taxpayers doesn’t cut it.