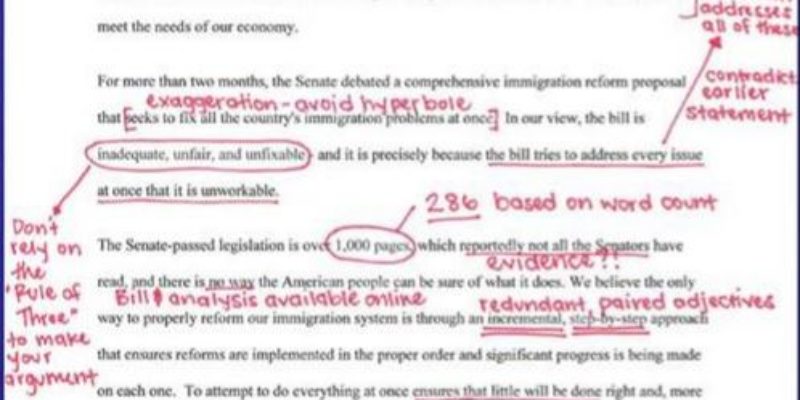 Cassidy has a letter to Speaker of the House John Boehner circulating at present regarding the Senate immigration bill, and urging Boehner to kill it – which is what the House leadership has opted to do – while rejecting “comprehensive” legislation on immigration.

Our immigration system is broken and in need of serious reform. We must secure our border, improve interior enforcement, streamline legal immigration and modernize our visa system to meet the needs of our economy.

For more than two months, the Senate debated a comprehensive immigration reform proposal that seeks to fix all the country’s immigration problems at once. In our view, the bill is inadequate, unfair and unfixable, and it is precisely because the bill tries to address every issue at once that it is unworkable.

The Senate-passed legislation is over 1,000 age, which reportedly not all the Senators have read, and there is no way the American people can be sure of what it does. We believe the only way to properly reform our immigration system is through an incremental, step-by-step approach that ensures reforms are implemented in the proper order and significant progress is being made on each one. To attempt to do everything at once ensures that little will be done right and, more likely, that nothing will be done at all.

We are disturbed by the secret and underhanded way in which the immigration bill moved through the Senate. Taking immigration reform on step at a time makes an open and transparent process more likely and will prevent the last minute secret deal-making and vote-buying that occurred in the waning days before the Senate vote.

That’s why we will oppose any effort to pass immigration reform in one large comprehensive bill. There is no reasonable justification to link each piece of reform – all significant undertakings – to one another.

We remain confident that Congress can and should make significant progress on fixing our immigration system. We stand ready to work with you to accomplish this goal for the American people.

Cassidy got a pretty solid group of GOP House members to sign on to the letter. Among them are Reps. Tim Huelskamp of Kansas, John Culberson and Mike Conaway of Texas, Charles Boustany and Rodney Alexander of Louisiana, Steve Palazzo and Alan Nunnelee of Mississippi, Joe Pitts of Pennsylvania, Tom Price, Paul Broun and Austin Scott of Georgia, Paul Gosar and Trent Franks of Arizona, Andy Harris of Maryland, Doug Lamborn of Colorado, Jeff Duncan of South Carolina, Bob Latta of Ohio, Michele Bachmann of Minnesota, Blaine Luetkemeyer of Missouri and Richard Hudson of North Carolina.

But not Takano, who was an English literature teacher for 20 years. He thought it would be cute if he graded the letter like it was an English paper. And this was what resulted…

I edited a draft letter by GOP members to Boehner that is looking for cosigners. Not signing it. #Immigration pic.twitter.com/xhLYSYi3lx

A close-up look at Takano’s work… 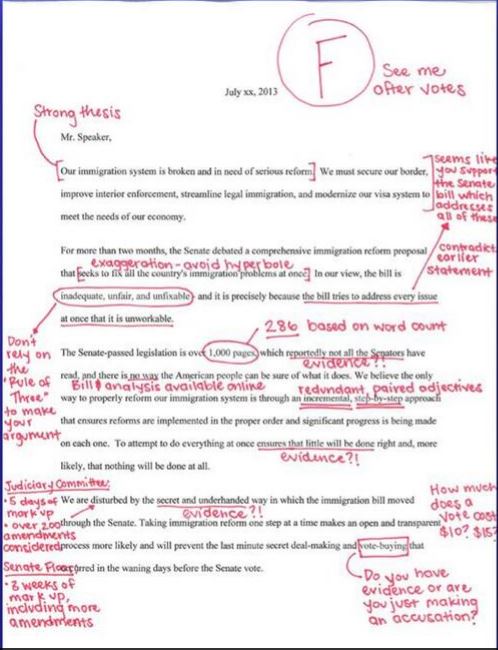 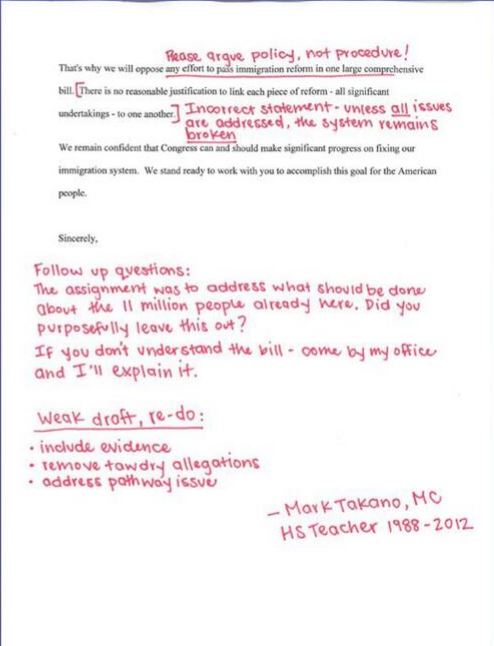 Cassidy was naturally a bit irritated at the Californian’s stunt. His response wasn’t exactly “Zip it, Sulu, or I’ll break one off in you,” but it wasn’t a whole lot friendlier…

“This embodies everything that is wrong with Washington — rank partisanship and pettiness while posturing oneself as above the fray and superior.

“All this letter asks for is what the American people want — transparency and deliberation in addressing our illegal immigration problem. Representative Takano wants us to pass a massive bill quickly without even knowing what’s in it. Ironically, he attacks the GOP for wanting to break the process up into smaller, more focused reforms.

“Representative Takano’s action and grandstanding represent everything Americans hate about Washington, but I won’t let his partisanship stand for all of us. My colleagues and I are absolutely going to keep requesting that the Speaker listen to the American people, not the big money interests and rank partisans trying to bully and intimidate members of Congress to quickly pass this massive amnesty bill.”

That might be a bit overwrought, but he’s correct that a freshman congressman play-acting as a teacher to his congressional peers isn’t just tawdry, it’s arrogant in a way that in former days might provoke a “pistols at dawn” challenge.

In fact, stuff like this makes one wish for pistols at dawn to make a comeback.

We thought we’d weigh in on Takano’s Twitter feed. Just in a small way…

@RepMarkTakano It's smarmy crap like this which makes so many kids drop out of high school.