Detroit has filed for bankruptcy, the AP’s Ken Thomas reports.

In June 2012, the City of Stockton became the largest-ever city to file for bankruptcy.

The Motor City faces $20 billion of long-term liabilities. The Wall Street Journal’s Matt Dillon says those holding onto $11 billion in unsecured debt are basically staring into the abyss, facing the prospect of getting next to nothing from the city’s obligations.

The pension funds want to block Orr’s attempt to drastically reduce the amount of benefits owed to current and former city workers.

The funds are fully aware that they could still face such cuts even if the city is forced to go to court, but say they’d prefer to fight the cuts there.

Detroit was a brilliant, golden example of the prosperity and progress that American free-market capitalism could produce. Detroit was the center of American industry, and it was a treasure trove of art, architecture, philanthropy and culture.

And in a half-century, you stupid assholes turned that shining city on a hill into the largest municipal bankruptcy in world history. Detroit’s population has shrunk from 1.8 million to 800,000, and it’s a burned-out ruin where most of the denizens are functionally, if not totally, illiterate.

Three years ago, Steven Crowder captured the magnitude of your failure in the Motor City…

Nothing has improved since then.

We’ve done this before, but it’s worth bringing back… 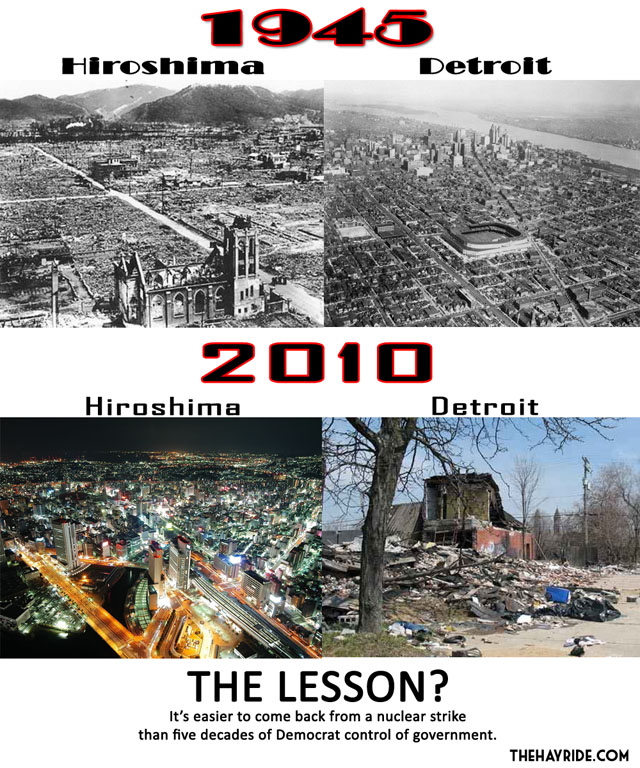 And today, Detroit breathed its last. Cause of death: inoperable governmental cancer.

Good work, shitheads. Don’t try to make excuses for it. You own it. You got everything you wanted for Detroit, and this is the result.

You’ve gotten everything you wanted in California, New York and Chicago as well. Those results are coming, and soon.

Interested in more national news? We've got you covered! See More National News
Previous Article APPEL: The Majority Has Rights, Too
Next Article Ex-Gang Member To Sharpton And Jackson: I See Right Through You