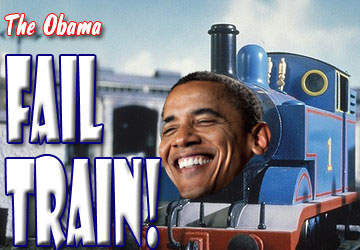 Yes, that’s a strong statement. But if you’ll consider where he is and what he’s doing, a case can be made for it.

And while it might be fun for the enemies Obama has so enraged over the years to watch him cut his own political throat, he’s going to drag the country down with him.

Obama’s current circumstances are unenviable. The IBD/TIPP poll for June has his approval rating at an anemic 41 percent, the worst of his presidency.

That poll isn’t an outlier. Rasmussen Reports has Obama at a 46 percent approval rating, with 52 percent disapproval – the same number IBD/TIPP found. And Rasmussen’s Approval Index, a measure of Strong Approvals vs. Strong Disapprovals, is -17, a number on the low side of Obama’s history… In addition, Obama’s actions and policies put him on the wrong side of the public on issue after issue. Consider…

There are more examples of the president being on the wrong side of the public on lots of domestic issues.

One can infer from these and others, including a composite poll which says that public trust in the federal government has fallen from 73 percent back in 1958 to only 26 percent now, that Obama has all but broken the faith of the American people. His scandals have melted away the country’s belief that he can drive successful policy or manage much of anything. And the public consistently says that politicians, in whose ranks the president surely fits, do things for purely political reasons rather than in pursuit of good policy.

What effect, then, of yesterday’s decision by the Obama administration to delay the implementation of the employer mandate in Obamacare until after the 2014 elections?

That decision doesn’t affect the individual mandate to purchase insurance, which still goes into effect next January. The overall policy still threatens to wipe out the national economy. All this does is to take the edge off in an effort to save the half-dozen or so Democrat senators up for election in red states and with them, Obama’s majority in the Senate.

Does anyone in the White House really believe the public won’t see through what they’re doing? Do they believe their action yesterday won’t serve as an admission that Obamacare is unworkable and destructive?

Harm to health care, interrupted health insurance, bigger federal deficits, and brazen disregard for the law of the land sounds like a bad idea.  Why do it?

Politics.  Democrats no longer face the immediate specter of running against the fallout from a heavy regulatory imposition on employers across the land.  Explaining away the mandate was going to be a big political lift; having the White House airbrush it from the landscape is way better.

It helps with Obamacare in other ways as well.  The administration was flailing to find high-profile allies (e.g., the National Football League) to advertise the wonders of Obamacare.  In a single masterstroke it has given every company a reason to explain its existence (“don’t worry, you’ll be fine in the exchanges”) and created ade facto advertising campaign of enormous scale and reach.  Deviously brilliant.

Finally, those on the paranoid right and central-planning left will see this as a willful acceleration of the transition to exchanges full of Americans that are ripe to be transformed into a single-payer system.  It will be read as another blow struck in the meta-fight over the size and scope of the federal government.

The announcement is a surprise but bad policy, dreadful governance, and slippery politics are not.

Messaged correctly, there is no reason why Republicans can’t profit from this decision if they sell the dread rather than the ill effects. Certainly the party’s recent tone-deaf track record gives pause to any faith they’ll do that correctly, but it’s not difficult to run campaigns and messaging to the tune of “Obama knows he’s going to destroy your health coverage, and he admitted it by backing off on implementing this policy in an effort to keep you from punishing him for it – and your Democrat Senator who’s up for re-election is one of his willing stooges in doing this to you.”

But while the Obamacare delay could be argued as a good political move, his foreign policy can’t.

There are millions of protestors in Egypt attempting to overthrow the dictatorial Islamist Muslim Brotherhood government of Muhammad Morsi, a government which is intensely anti-American and is actively persecuting that country’s Coptic Christian population. Violence has already begun, as 23 people died last night in a battle at Cairo University. Now, the country’s military has Morsi under deadline to resign, which he says he won’t do, and all hell is about to break loose.

Obama had the opportunity to push Morsi to abandon his anti-American and anti-Israeli rhetoric, to straighten up and fly right. Instead, he has taken his weak-sauce policy toward Egypt to an extreme…

The administration stopped short of demanding that Morsi take specific steps, the officials said, and instead offered strong suggestions that are backed by billions of dollars in U.S. aid to ease the tensions.

The U.S. officials spoke on condition of anonymity because they were not authorized to speak publicly about the delicate diplomacy that is aimed at soothing the unrest and protecting Egypt’s status as a bulwark of Mideast stability. Yet the warnings were unlikely to placate the protesters gathered at the site of Egypt’s Arab Spring revolution two years ago, many of whom have accused the U.S. of siding with Morsi.

“The United States is only looking after their interests. They will only bet on the winning horse, and the winning horse is always chosen by the people,” an ultraconservative member of the Salafist movement who would only identify himself as Amr, 31, said Tuesday night at Tahrir Square. “At the end of the day it is the people who say that who stays and who goes.”

“Pointed warnings?” The president himself admitted Egypt is no longer a U.S. ally with Morsi at the helm. When the Egyptian people set a world record for the largest political demonstration in history, with some 17 million people taking to the streets, to protest a government which has turned that country away from America and toward an Islamist direction – all he offers are pointed warnings?

Obama is giving the Muslim Brotherhood government in Egypt $1.3 billion in aid and he isn’t discussing the suspension of that aid. What that means is we will be supplying military aid to an anti-American government in the midst of a civil war.

The absurdity of that position won’t be lost on the American people.

It won’t be lost, particularly given that it follows after Obama’s Edward Snowden embarrassment, in which his policy toward Russia and China has exploded, and public disgust at our Syria policy – in which we’re going to arm cannibals and beheaders of Christians – is reaching near-unanimous levels.

Yes, foreign policy is hard. OK, how about what’s easy? The George Zimmerman case, which is generating a great deal of controversy as it increasingly appears there is no way the prosecution can prove out the second degree murder charge on the defendant, is a slam-dunk opportunity for Obama to bring the country together. And it’s pretty clear we need it.

Post-trial race riots couldn’t possibly be more dangerous for this country. If Zimmerman is acquitted and a certain proportion of the public goes into “Riot for Trayvon” mode, a backlash will come – and race relations in America will be set back half a century or more.

It is incumbent upon the President of the United States to call for peace and to work to soothe those race relations. The President must be working to calm tensions down while the Zimmerman trial proceeds and social media explodes with what can only be called terroristic threats, and he is perfectly suited to make a difference – after all, the loudest purveyors of the “Kill Zimmerman” rhetoric are also some of his most vigorous, if unsophisticated, supporters. He could do so much good by defending the integrity of the criminal justice system and denouncing even the talk of riots or violence, and instead he offers silence.

But silence won’t do. Silence, particularly in light of his unwise and destructive “if I had a son he’d look like Trayvon” rhetoric at the outset of this case and controversy, merely enables those who would destroy the rule of law and create mob violence when this case ends as it appears it will.

If and when there are riots – and from this quarter the fear of violence is the only thing keeping the judge from dismissing the prosecution’s nonexistent case right now – upon a Zimmerman acquittal, that blood will be on Obama’s hands for not having lifted a finger to stop it when anyone could see it’s coming.

Putting politics over policy on health care and economics, trashing America’s interests in foreign policy and exercising willful negligence on a basic piece of governance which could lead to dead bodies in our streets – any of these could easily break a presidency. Obama, amid sinking poll numbers and broken public trust in government, is engaging in all three.