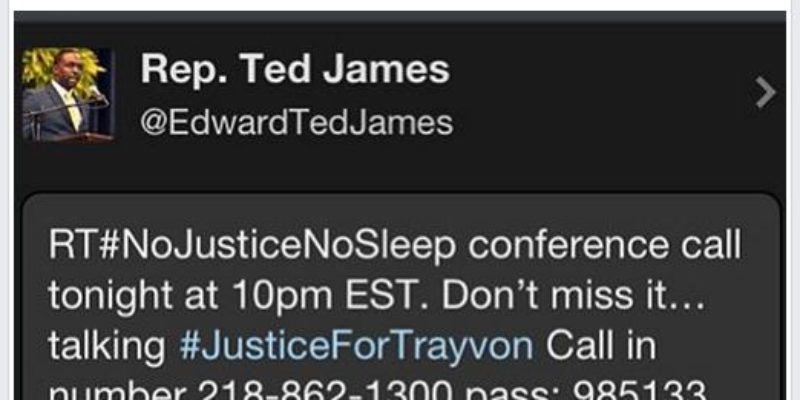 We touched on the subject of Rep. Ted James’ incitement of racial hatred in our post yesterday about his fellow demagogue Tarvald Smith, but since there are new developments from the weekend we thought we’d delve a little deeper.

Specifically, James, a Democrat from the northern part of Baton Rouge, fired this off via social media yesterday… 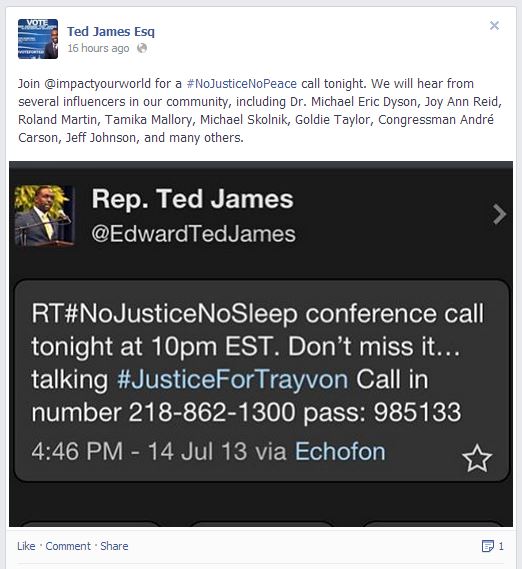 This is of a piece with the Al Sharpton-Ben Jealous push to get the Justice Department – the same Justice Department which spent your tax dollars to gin up protests in an effort to pressure the state of Florida to embark on a prosecution in the Zimmerman case – to move forward with a “civil rights” trial against the Sanford, Florida neighborhood watchman.

The Justice Department has responded to appeals to probe whether George Zimmerman committed any civil rights violations in the fatal shooting of 17-year-old Trayvon Martin — but previously filed FBI documents are already challenging the narrative that the shooting was racially motivated.

Sanford police detective Chris Serino told FBI agents last year that after examining the case, it appeared Zimmerman was suspicious of Martin because of his “attire, the total circumstances of the encounter and the previous burglary suspects in the community.”

According to the document, Serino considered Zimmerman as having “a little hero complex, but not as a racist.”

Serino told the FBI that there had been several burglaries in the area, and that gang members in the community “typically dressed in black and wore hoodies.”

“When Zimmerman saw Martin in a hoody, Zimmerman took it upon himself to view Martin as acting suspicious,” Serino said, while describing Zimmerman as “overzealous.” The FBI document was posted on the Smoking Gun website.

Ted James is a lawyer. Presumably he knows that federal civil rights charges in a case like this depend on the presence of actual civil rights violations.

Like for example, if George Zimmerman had been a Klansman and showed up at Trayvon Martin’s father’s girlfriend’s apartment, carted him off somewhere and did him in, and then dumped the body in a lake.

Had that happened, this other graphic Ted James posted on his Facebook over the weekend might not be quite so ridiculous and offensive… The kid on the left is Emmett Till, the circumstances of whose death in 1955 were similar to that described above.

Naturally, James’ racial agitation after a Hispanic man killed a black teenager in self-defense 721 miles away from his legislative district doesn’t happen in a vacuum.

Something else developed over the weekend a little closer to home…

A Louisiana prosecutor says he won’t pursue hate crime charges against a black man accused of beating a white man and telling the victim he was in “the wrong neighborhood.”

The Advocate reports that Donald Ray Dickerson, 41, is charged with assaulting the man at a Baton Rouge gas station in May.

Moore says Dickerson faces a much longer sentence under the habitual offender law and the victim supported his decision.

Under the state’s habitual offender law, Moore said a defendant can be sentenced to life in prison without the possibility of parole when someone is convicted of four felonies — at least two of which are crimes of violence.

Dickerson, who had recently been released from federal prison at the time of the attack, has previously been convicted of purse snatching, carnal knowledge of a juvenile and armed robbery.

Moore, who wants the longest jail term possible for a dangerous criminal, isn’t prosecuting Dickerson under the hate crime statute because what he did wasn’t racially motivated. To the extent that you even believe in “hate crimes,” a dubious theory to begin with, this was an open-and-shut case of one…

Officials say a family – a 36-year-old male, a 41-year-old female and a 14-year-old female – stopped at a gas station located at the intersection of Scenic and Plank at roughly 9:30 p.m. on Sunday, May 12. As the man was waiting in line to pay for his gas, he was approached by the suspect.

Investigators with the Baton Rouge Police Department say the suspect, Donald Ray Dickerson, 41, walked up to the man and said “you’re in the wrong neighborhood and you’re not going to make it out.” Dickerson then began to punch the victim in the face.

The 41-year-old female attempted to intervene and stop the attack. When she did, she was allegedly attacked and hit by Devin Bessey, 24.

The 14-year-old victim also attempted to intervene, but she was then hit by Ashley Simmons, 22.

Witnesses at the scene told NBC33 News that all of the victims were knocked to the ground and at least two of them were knocked unconscious during the attack.

The male victim sustained serious injuries, including broken bones in his face and a concussion. The severity of the injuries sustained by the females was not revealed.

If you don’t think that’s a racially-motivated attack you’re kidding yourself.

So that’s racial violence right here in Baton Rouge. It didn’t happen in Ted James’ district; the corner of Scenic and Plank is two districts over in Pat Smith’s district (she hasn’t said anything inflammatory on the Zimmerman case that we know of). But it’s clear that when a white man goes into a gas station in a black neighborhood and he gets attacked for no reason and put in the hospital while being told he’s in the wrong neighborhood, it’s racial violence.

The difference between these percentages is not great, but it is remarkable nevertheless. After all, generations of blacks fought the white racism from which they suffered for so long. If many blacks themselves now think that most other blacks are racist, that is startling.

The moral claims advanced by generations of black leaders — claims that eventually touched the conscience of the nation and turned the tide toward civil rights for all — have now been cheapened by today’s generation of black “leaders,” who act as if it is all just a matter of whose ox is gored.

Even in legal cases involving terrible crimes — the O.J. Simpson murder trial or the charges of gang rape against Duke University students — many black “leaders” and their followers have not waited for facts about who was guilty and who was not, but have immediately taken sides, based on who was black and who was white.

Groups that rose from poverty to prosperity seldom did so by having racial or ethnic leaders. While most Americans can easily name a number of black leaders, current or past, how many can name Asian American ethnic leaders or Jewish ethnic leaders?

The time is long overdue to stop looking for progress through racial or ethnic leaders. Such leaders have too many incentives to promote polarizing attitudes and actions that are counterproductive for minorities and disastrous for the country.

He wouldn’t approve of #NoJusticeNoSleep. Because it’s racially divisive and counterproductive to the cause of civil rights.

Stirring up the rabble along racial lines gets you hospitalized motorists at gas stations. It makes people unsafe. Unsafe people do things like George Zimmerman did. And the cycle continues, and things get worse and worse.

We saw this in the 1950’s and 1960’s in the South. You had White Citizens’ Councils in Southern states aimed at promoting a tribal perspective among white people and riling up the hooples among the poor and working class in the white community to get them to act as members of a tribe – and the result, whether by design or stupidity, was that the Ku Klux Klan made a practice of burning crosses on lawns and dragging people away for beatings, or worse.

And in the case of Emmett Till and the victims of the gas station attack at Scenic and Plank, you had people attacked by racists for being in the wrong place at the wrong time. Luckily, the gas station victims didn’t end up at the bottom of a lake somewhere – but the principle is the same. There are other, uglier, examples to be found elsewhere.

Ted James’ actions are no different than those of the White Citizens’ Council crowd in those bad old days. How similar he is! He’s a state representative and a lawyer, which makes him part of an educated and privileged elite, and he’s promoting his position in that elite by inciting a racist and agitated mentality among the poor and working class under his thumb. And don’t say this is different; it’s the same. The ignorant whites who bought into the Klan mentality had, on balance, a lower standard of living than Ted James’ constituents do – they didn’t drive cars as nice, they didn’t have central air conditioning in the same numbers, they had less access to advanced telecommunications and modern conveniences and their jobs didn’t pay as well.

If you want to throw in the fact that everybody involved on both sides of that equation was and is a Democrat, a party which sure likes to see people pitted against one another on the basis of tribal mentality, you’re welcome to.

But if you want to argue that black people don’t control anything like the white people in the 1950’s and 1960’s South did, think again. Or better yet, go visit the corner of Scenic Highway and Plank Road and ask yourself who controls that area.

Ted James’ district is 69 percent black and 22 percent white. Whites are a minority in that district increasingly put upon by a state representative who is busy fomenting racial discord on behalf of the folks in the majority.

You can call that turnabout, and fair play. Others would call it the same atrocious “leadership” which led to violence and repression the last time it was tried, and no progress at all for either side.

It would be nice if Ted James would learn from the mistakes of the past and refrain from repeating them. This weekend he showed he hasn’t, and regular folks stand to pay the price should he continue his tribal agitation.

Interested in more news from Louisiana? We've got you covered! See More Louisiana News
Previous Article Meet Tarvald Smith, Vice President Of The EBR School Board
Next Article SADOW: There’s A Lot Of Property In NW Louisiana The State Should Sell Off