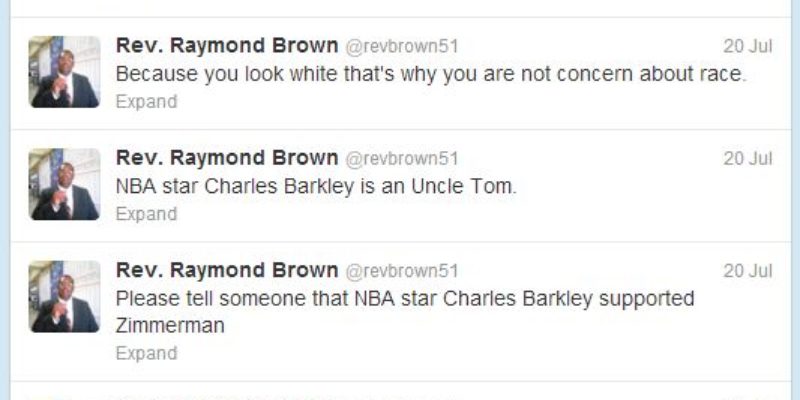 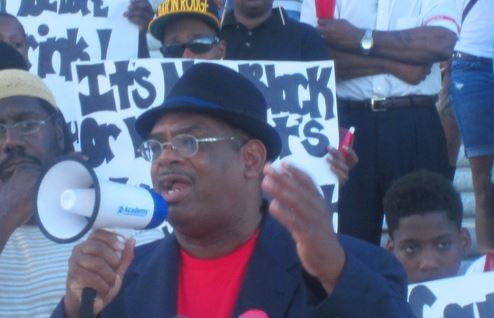 Last night, somebody actually tried to do something good to tamp down the racial animus surrounding the Merritt Landry case in New Orleans. Brothers Against Violence, an activist group seeking to address the culture of crime in that city, held a meeting not far from Landry’s home in the Marigny section of that town aimed at promoting “unity” and decrying a “rush to judgment” about the case, in with Landry shot a 14-year old professional thief who scaled a six-foot high spiked fence and was in his yard at 2 a.m. Friday morning.

Unfortunately, there wasn’t much unity thanks to one of the participants. The Rev. Raymond Brown, who is president of something called National Action Now, was allowed to speak at the meeting and promptly commenced to hurling grenades…

Community activist Brother Al Mims, along with others at the rally, said the meeting became heated during a speech by the Rev. Raymond Brown, with National Action Now. Brown spoke in support of shooting victim Marshall Coulter.

Monday evening’s meeting, which was organized by the groups Brothers Against Crime, National Action Now and Silence is Violence, started at 6:30 p.m. at the corner of Mandeville and Dauphine streets and was over within 15 minutes.

It was during a speech by Brown when spectators began yelling at the speaker and at one another.  “That’s what we’re out here trying to prevent,” Mims said of the shouting match. “We’re here to tell people on all sides just to be cool.”

Mims was one of several people who spoke at the event. He said he wanted to encourage the public to withhold judgment until the criminal justice system runs its course.

At 6:45 p.m., after the meeting ended, some on the corner were still arguing about the incident that has caused a widespread debate in online forums over the rights of homeowners, gun owners and the accused. “They came here to stir the pot, and that’s what they did,” said one bystander, who requested not to be named.

Fox 8 in New Orleans was there for it…

The good news is that it sounds like Brown didn’t turn on the crowd too much.

The bad news is that Brown has exactly the wrong kind of friends where it comes to blowing this case into another Zimmerman fiasco.

And Rev. Raymond Brown was one of the producers of the mess in Jena.

And he hangs around with the Occupy crowd…

Before the Landry case popped up and gave this guy an opportunity to get himself some publicity, last week he was busy regulating Uncle Toms in show business… 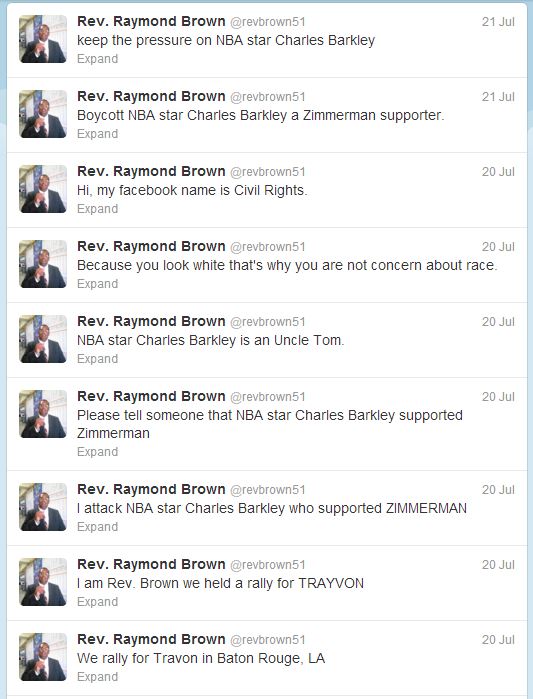 Twitter is a good medium for him, as he’s not what you would call a particularly eloquent writer in more long-form prose…

Message from Rev. Raymond Brown:   To all my brothers and sisters on the front lines fighting for justice, my name is Rev. Raymond Brown I am a community activist and pastor,  I speaks the truth nothing but the truth so help me God.  I support every human being constitutional rights and international rights,  I believe that the civil rights act are for every citizen of the United States and none citizens as well,  I believe that racism stll exist in America.  I think that we need a laws that give us the right to fight police in self-defense. Now if you fight a police officer the government will take sides with that officer.  But, if citizens had the right to defend themselves we will see police brutality end over night and that’s a fact.  My position on black men killing black men is this, black men have nothing to live for so they turn to a life of crime, These people have no education, no jobs, no God in their life, nothng to live for that’s why they are so quick killed each other.   Dr. King, said, “To deprive a man of a job or an income. You are in substance sayng to that man that he has no right to exist.”  The innner city black man woman has been deprived of life and an income dust he or she has no right to exist.   Dr. King, siad “No man is an island all by him self.”    If you disagree I invite your reply.

Truth be told he’s not a whole lot better verbally…

Trying to get Governor Kathleen Blanco’s attention during a rally is not that uncommon, but when a New Orleans reverend referred to the governor using the ‘B-word’ — he not only got attention, he says he also got a few threats. Monday, Reverend Raymond Brown formally apologized to the governor, and WAFB’s Jim Shannon was there.

Even though Reverend Brown apologized, the governor says his comments were downright painful. They came during a rally where he and others were trying to draw attention to an incident in New Iberia last month where police used tear gas to disperse a crowd.

Calling the governor the equivalent of a female dog does not score you points in Baton Rouge. In fact, it will probably get you some phone calls.

“[I had ] a message from the governor saying she was very upset about my statements and also I spoke with a deputy chief of staff they said they had a meeting regarding me using the ‘B-word’ in referring to the governor,” said Rev. Brown.

Reverend Brown says he was trying to get people’s attention about problems in New Iberia. In New Orleans Monday, he personally apologized to the governor. He has sent written apologies, called and then came to Baton Rouge to again apologize on the steps of the capitol.

“I very seldom use those types of statements when I’m referring to elected officials; particularly the highest office in the state, the governor,” Rev. Brown said.

Interestingly, though, Brown hasn’t been a complete down-the-line left-wing poverty pimp. For example, he supported Jindal – though probably not for ideological reasons – and he also took up for Matthew Owens when the latter was beaten by a gang of black thugs on his porch in Mobile. That, and his friendship with Brothers Against Violence head Nadra Enzi, was likely why he was invited to yesterday’s Marigny meeting. Which, it turns out, was a mistake.

So if there’s a guy who will turn this thing into a nightmare, here’s as good a bet as any.