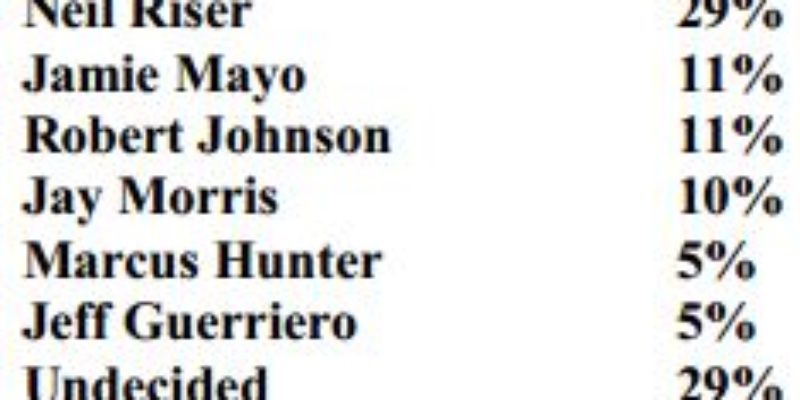 Pollster John Couvillon released a poll this morning on the 5th Congressional District race, with state Sen. Neil Riser (R-Columbia) holding a sizable 18-point lead over his nearest competitors. But Riser’s separation from the field still isn’t enough to keep him out of a runoff, which could potentially be with another Republican.

There is a special Congressional election which will be held on October 19. If the election were held today, which candidate would support ? (Rotated, with leaners included)

Morris, at 10 percent, has room to move ahead – perhaps more so than Mayo and Johnson. That’s because the innards of the poll show that lots of Republicans are still undecided – 26 percent in fact. Some 33 percent of Democrats are undecided, but given that there are four candidates in the race already (a number which won’t be growing since Sen. Rick Gallot and Alexandria mayor Jacques Roy have said they won’t be running) – Mayo, Johnson and Hunter, plus Monroe lawyer Charles Kincade (EDIT: Kincade’s not going to run), whose support was not polled in the JMC survey, those undecideds may be split.

Moreover, Mayo and Johnson appear to suffer from a regional split given that Johnson represents the Alexandria area in the state legislature and Mayo is Monroe’s mayor. Monroe and Alexandria are the two metropolitan areas represented in the 5th District and they’ve got roughly similar populations – the Monroe area has about 177,000 people, while Alexandria has 154,000.

But Hunter draws votes from Mayo, who otherwise might have a chance to pull away from the field and join Riser in a runoff.

About the poll, which surveyed 755 respondents…

Interested in more national news? We've got you covered! See More National News
Previous Article The RNC Fires A Shot Across The Bow To NBC, CNN
Next Article AND YET ANOTHER POLL: Harper Polling Has It Cassidy 47, Landrieu 45