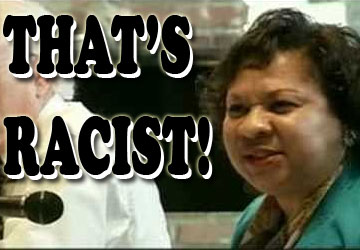 We’re on a roll with e-mail threads emanating out of the Baton Rouge Metro Council today, aren’t we?

The latest pickings from the Council’s e-mail servers actually come from those mean and nasty right-wing Angry Birds at Louisiana Strong, the conservative community activist organization whose efforts prevented the appointment of Bill Johnson, a felon convicted in a scheme to steal some $13,000 by fraudulently misrepresenting himself as a representative of an organization he didn’t represent, from landing on the governing board of the Capitol Area Transit System.

As it happens, a pair of Metro Council members were a little less than appreciative of being apprised of Mr. Johnson’s rough-and-tumble exploits in philanthropy. After receiving an e-mail from Lennie Rhys, the president of Louisiana Strong, containing the text of a 2006 Baton Rouge Advocate article outlining Johnson’s arrest for his part in the scam, Metro Council member Chauna Banks-Daniel sent this in response…

I have been in the media a lot lately and I can honestly say, “you can’t believe everything you read.”  Having said that, I guess my only question is, “Were these people found guilty of the charges?”

My other issue is sending this news article out several hours before a potential vote is a kind of “dirty politics”, assuming that this information was public knowledge in 2006.  Do you think the council should allow this gentleman to respond?

I am also concerned that your support of Mr. Pennington, which is fine…kind of makes your motives questionable.

Metro Councilman John Delgado also responded, and it was his reaction which ultimately killed Johnson’s appointment…

I have a copy of his guilty plea.   Based on this new information, I cannot support they appointment of Mr. Johnson.

Sent from my BlackBerry 10 smartphone.

Things got more interesting – if predictable and stupid – from there…

Was this action taken on all applicants by LA Strong?  It is unprecedented and makes the behavior appear very racist, underhanded and outright mean spirited.

I am appalled that any group would go to this length to sway a public body.

As a citizen doing my duty, your response puzzles me.  Am I to infer that you would rather have appointed a felon to the CATS board rather than know the truth?

As an elected, public servant your name calling and charges of racism are unbecoming to your office and your responsibilities.  Louisiana Strong is much more concerned with a candidate’s trustworthiness than his or her race.

We agree to disagree on this item, relative to this issue and the unworthy manner in which the information was conveyed Ms Rhy.

You might have trouble processing the idea that a citizens’ group alerting elected officials they were about to install a convicted felon with a record of stealing money from businesses supposedly headed to benefit a civic purpose…would be criticized and called names for doing so by those elected officials.

But you’ll get over it, because that’s exactly what Ronnie Edwards did. Notified that Bill Johnson is a felon of rather recent vintage who is about to be appointed to a board the public perceives as choc-a-bloc with felonious activity, she immediately screeches that the notification is racist.

Rhys put out the following press release today, along with a release of the e-mail thread…

Late Wednesday morning, Louisiana Strong received information that an applicant the MetroCouncil was considering for appointment to the CATS board later that afternoon had been arrested and charged with a felony.  A colleague conducted a Google search on the name and then a search of The Advocate archives and found an article providing the details.

Realizing the embarrassment to the council if they voted to appoint this person to the already challenged CATS board, an email with a copy of The Advocate article was sent to each council member.  At that time we knew only a name.  We did not know if Mr. Johnson was black or white.  It did not matter.  We were trying to do our civic duty and prevent a tragedy.

“Was this action taken on all applicants by LA Strong?  It is unprecedented and makes the behavior appear very racist, underhanded and outright mean spirited. I am appalled that any group would go to this length to sway a public body.” (signed Ronnie)

No, we did not Google every applicant’s name…only the one we were told was a convicted felon.  It was very easy and did not need a background check by a government entity.

Racist?  For doing our civic duty?  The Delphi Technique in action.

This being a pretty good description of the Delphi Technique.