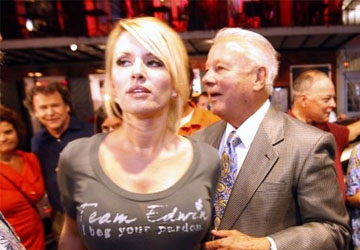 …and Louisiana’s media falls for it like easy marks.

Understand that  The Governor’s Wife, which made its debut Sunday night, is an atrocious exercise in reality TV. Here’s what Variety said about it…

Creepy on almost every level, A&E’s “The Governor’s Wife” couldn’t reanimate Anna Nicole Smith, so it goes for the next best thing: Trina, the 35-year-old wife of former Louisiana governor Edwin Edwards, and thus the stepmother to his two 60-something daughters. Blond and buxom, Trina would be the ostensible star of the show if Edwin (also an ex-con) wasn’t so much more interesting, although the producers conveniently skip all the obvious questions, starting with how the hell this whole relationship happened.

Since almost nobody is likely to identify with the principals (in the way one can, say, with the struggles of the “Honey Boo Boo” clan), “Governor’s Wife” qualifies as another freakshow – essentially “Extreme Trophy Wife,” to put a TLC spin on it.

History has shown there is an audience for that, but even all that Cajun cooking doesn’t make Edwin’s dish or her rusty old spoon any more appetizing.

Your interest in — or tolerance for — A&E’s new “reality” series The Governor’s Wife will be tested in the opening minutes of the first episode, at the very point where thirtyish Trina Scott Edwards, the bride of former Gov. Edwin Edwards, talks about her desire to have a child with him and mentions harvesting the 85-year-old’s previously frozen “baby gravy.”

The Governor’s Wife was filmed in 2012 but delayed several times by the cable network (Edwin is now 86, and the “baby gravy” plan resulted in a son, Eli, born in August). A few curious Louisianans may tune in for Episode 1, but it’ll be a tall order getting anyone back for a second installment.

And even John Maginnis wasn’t too thrilled…

When the previews of The Governor’s Wife first aired, my response was that it would be both unwatchable and unmissable, much like a train wreck. It was that way in viewing its debut on A&E Sunday night, but when the second 30-minute episode started right afterward, two train wrecks were too many.

This is pretty awful TV, as it makes Duck Dynasty look like Masterpiece Theater. But given that American Hoggers and Swamp People have secured their places in the vast wasteland of reality programming, who’s to say that The Governor’s Wife won’t find its audience?

For its image, Louisiana should be so unlucky.

“Interesting” is a relative here, though. While Louisianians might feel compelled to tune in just to see what’s been going on with Edwards, A&E might want to start looking for their return receipt for this Louisiana purchase.

Nor did the New York Times…

People marvel at the resourcefulness — and Dickensian plight — of waste recyclers in Mumbai shantytowns, those so-called slumdogs who gather, sort, crush and reconstitute mountains of paper, plastics, metals and glass.

But American television, while not quite as efficient, also has a rather impressive way of recycling dirt.

“The Governor’s Wife,” a new reality series starting Sunday on A&E, is a case in point.

And The AV Club also gave it a thumbs down.

Like the documentary Queen Of Versailles, The Governor’s Wife is sad in ways that its onscreen participants couldn’t anticipate—the Edwards’ reveling looks so much chintzier than Trina seems to realize. The show also taps into a tradition that doesn’t function the way it used to: After Katrina and the lingering effects of an economic collapse (fed in part by disappointing returns on the massive New Orleans casino that was meant to be Edwards’ true legacy), Louisiana no longer celebrates the entertaining crookedness of its politicians. By trying to build a reality show on the dead ground of a discredited mythology, A&E has combined the worst of both worlds.

The Governor’s Wife checked in at 1.2 million viewers Sunday night, which placed it all of #39 for the evening. That’s hardly a good number for the first 30-minute episode; Nielsen didn’t have numbers for the second episode which came on immediately after.

It’s a decent bet that next week’s episodes will not finish that high. The show sucks, and Gambit had it right that it’ll be a tall order getting anyone back for a second installment.

So what do you do if you’re Edwin Edwards and you’re concerned your gold-digger wife will lose her dream of becoming a reality show superstar? Obviously you stir the pot and try to make news the best way you can…

Now, Edwards might even be considering a return to politics. On his morning radio show Wednesday, Baton Rouge newsman Jim Engster played audio from an LSU event he and Edwards attended Friday, Oct. 25.

When asked whether he would consider running for political office in the future, Edwards had this to say:

“Lately, for some strange reason, I’m beginning to think it might be a nice thing to do. But, I’m not going to make the decision based upon that. I’m going to make the decision based on whether I think I can win and whether there’s a need for me because I don’t want to end what I consider to be a successful political career on a sad note. But I love this state and I think I could do better than what has been done. And if I saw the opportunity and I thought that people would warm up to it, I would consider it.”

Engster has always been a friendly media source for the Silver Zipper to turn to. And he apparently didn’t state the obvious, which is that Edwin Edwards, convicted felon, is not eligible to run for a Louisiana office.

While Edwards hasn’t completely discounted the idea of running, several obstacles stand in his way. First, and most importantly, to run for the state’s highest office again, his time behind bars would require him to secure a presidential pardon just to throw his hat in the ring.

Without such a pardon, he would have to wait 15 years from the end of his original sentence to run again for office in Louisiana. Since he was released early, this would mean Edwards would have to wait until 2026 to run. At that point, he’d be 101 years old.

He’s going to be dead before that 15 years runs. And with all the problems Barack Obama currently has the last thing he’s going to do is pardon a Democrat felon in a state his name is already mud in – not when by doing so he’s likely to cost himself a Senate seat he needs.

In other words, Edwin Edwards is not going to run for office again. That’s asinine, despite the braying of idiots from Grand Isle to Shongaloo who somehow think the destruction he wrought to Louisiana’s economy and reputation merits his future public employment.

What he is doing is promoting his crappy TV show, and polishing his ego. And it seems he has lots of willing lickspittles in the state’s media who’ll offer up his self-promotion in order to help him do it.

That won’t change the TV ratings next week. They’re going to suck. And that show will get canceled.

When it does, maybe – just maybe – we’ll get to put Edwards and his pathetic, tawdry and embarrassing freakshow in the dustbin once for and all.

Interested in more national news? We've got you covered! See More National News
Previous Article BAYHAM: The NOLA Pelicans Are About To Take Flight
Next Article Hey, How ‘Bout A Dead Snake Video For Halloween?