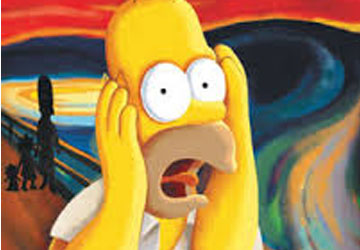 I’ve never thought poorly of John Podhoretz, the conservative New York Post columnist. But yesterday’s offering on the pages of that paper was shockingly shallow.

The gist of his piece was that the Republican Party is destroying itself over the government shutdown because polls say the GOP is slightly more blameworthy than are congressional Democrats or President Obama, and because House Speaker John Boehner is holding his hand out and asking for negotiations.

Every piece of evidence we have so far on the government shutdown shows the public is blaming Republicans most of all for the standoff. On Monday, an ABC poll showed 71 percent fault the GOP; 61 percent fault Congressional Democrats; 51 percent fault President Obama.

Yes, Democrats look bad. Yes, Obama is probably doing himself no favors by saying he won’t negotiate when the public wants politicians in Washington to work together.

If ObamaCare had been as unpopular as conservatives believed, their plan for the shutdown — that there would be a public uprising to force Democratic senators in close races in 2014 to defund it — would’ve worked. It didn’t. Not a single senator budged.

Their tactic failed, and now what they are left with is House Speaker John Boehner basically begging the president of the United States to negotiate with him.

That’s a pretty weak argument, no?

First of all, Congress’ approval rating hasn’t been anything but awful in a long time. Second of all, Harry Reid is just as responsible for that approval rating as Boehner is, so it’s not exactly a determinative measure of how this fight is going. Third, a big piece of that approval rating is conservative dissatisfaction with Republican performance in Congress – to the extent that 11 percent reflects Boehner’s popularity, let’s not forget that he’s widely distrusted by the conservative public.

So to panic about an 11 percent Congressional approval rating in the middle of this fight is terrible advice.

Second, John Boehner is expendable. As said above, he’s not popular among his own party across the country. He’s the House Speaker mostly because nobody has stepped forward to challenge him for that job. It’s only a matter of time before that challenge comes and when it does Boehner is very likely to be through in that job.

Why is Podhoretz so emphatic about Boehner’s popularity? If he loses the shutdown, he’s done as the Speaker and we’ll rebuild with somebody who’s more dynamic and a much better articulator of our principles. Has Boehner done a good job of carrying the conservative standard in this fight and communicating the Republican message? Even Podhoretz has to admit he’s a marble-mouth who garbles the party line at every opportunity.

But just because in the middle of this fight there are lousy poll numbers for the GOP – this is akin to asking the fans at halftime of a low-scoring football game what they think of the quarterback or the offensive coordinator – it’s time to throw in the towel.

And what are the poll numbers Podhoretz is worried about? That 71 percent of the public blames the GOP?

The Democrats got a 61 percent blame. Obama got a 51 percent blame. Given that the mainstream media hammered the Republicans for weeks leading up to this fight and scolded the Right that “you’re going to force a shutdown,” a 10 percent spread is actually a perfectly acceptable margin at this point.

Why is it such a sign of weakness that Boehner is asking Obama to negotiate? Frankly, Podhoretz has the optics completely wrong, and you’ll see the polls move accordingly.

This doesn’t look like weakness so long as Boehner doesn’t preemptively give up anything of value or negotiate with himself.

Because of the #SpiteHouse reports, which have been the brightest display of political stupidity in modern times, culminating with the latest revelation that Obama is refusing to pay the military death benefits for soldiers killed in action – despite the fact that benefit is covered under the military pay CR the president signed last Monday – and yesterday’s idiotic permitting of a rally on the National Mall for illegal aliens while veterans are still shut out of the war memorials, there is no reason to believe this thing will go well for Obama or Reid as it continues.

And what else is a joke is the subject matter of this shutdown. This whole thing is about Obamacare, and Obamacare is New Coke you’re required to buy. Podhoretz notes that Real Clear Politics has Obamacare’s negatives at 51-40; that’s driven largely by a Rasmussen poll which had the negatives at 49-45, and that poll makes the average look a bit better.

But here’s what else is in that Rasmussen poll…

Voters remain closely divided when asked if the government should require every health insurance company and health insurance plan should be required to cover the exact same set of medical procedures. Thirty-six percent (36%) say yes, down six points from a high to date of 42% in early September. Thirty-three percent (33%) say no, while nearly as many (31%) are undecided.

Seventy-six percent (76%) of voters believe individuals should have the right to choose between different types of health insurance plans, including some that cost more and cover just about all medical procedures and some that cost less while covering only major medical procedures. That’s up five points from a month ago and the highest level of support to date. Just 10% disagree, with another 15% who are not sure.

Even more emphatically, 87% think individuals should have the right to choose between different types of health insurance plans, including some with higher deductibles and lower premiums and others with lower deductibles and higher premiums. This marks an eight-point increase from the previous survey and is also a new high for the year. Only four percent (4%) don’t believe individuals should have that right to choose.

Not to mention that 71 percent favor opening up the insurance market for people to buy across state lines.

In other words, the favorability of Obamacare seems pretty soft – what that poll shows is the public wants people to have the ability to buy insurance at rates they can afford. Given that Obamacare is expensive as hell, something the public is learning as it begins to roll out, do you expect it to become more popular, or less, as this thing progresses?

And Podhoretz says that because the Democrats haven’t lost a single senator the fight is lost. He doesn’t note that the GOP hasn’t lost a senator, either, despite widespread accounts of bitching within the caucus.

That’s like saying because you haven’t thrown a touchdown pass in the first half of a low-scoring game your quarterback’s career is over.

This is a grind-it-out, low-scoring slugfest of a game. To worry about what the fans in the stands think while the game is going on is stupid. And to worry about Boehner’s popularity amid this thing is dumber still.

Podhoretz is not a stupid guy. But yesterday’s column wasn’t good analysis.