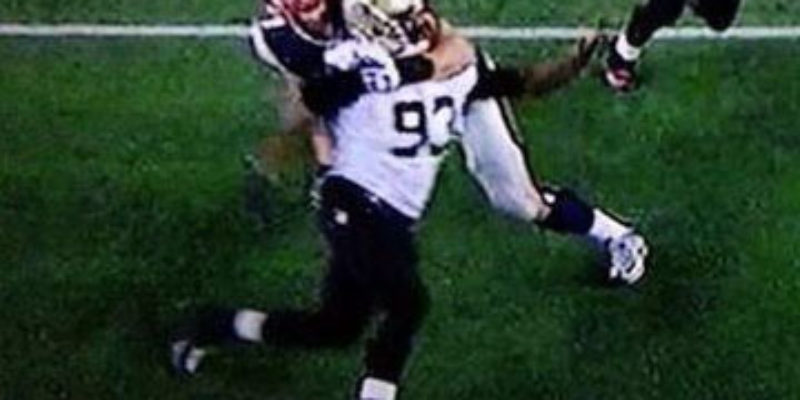 MacAoidh said last night that now he knows why Rob Ryan got fired in Dallas. He said that not blitzing Brady on that last play was Radioactive Stupid; New England was outta time outs and if you get a sack, or if you force Brady to throw a checkdown and you can tackle the guy before he scores the clock runs out before they can run another play – and since you’d already sacked ’em five times by bringin’ blitz you had a better-than-good chance of makin’ it work.

He was also fumin’ last night about puttin’ Jabari Greer on that Thompkins kid. The Thompkins kid is the second-tallest receiver New England has, and Greer is by far the shortest cornerback the Saints have. He’s not wrong about that, but I think they were in a zone so that would make it a little less of a sin.

Ryan rushed four guys on the play. You can see three of ’em in that shot.

Oh, but what’s that goin’ on in the bottom left corner of the screen? 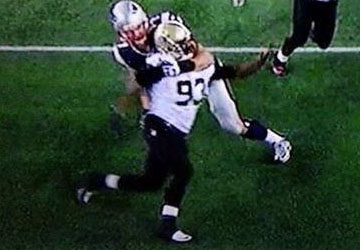 Not craptastic officiating at all. That isn’t a textbook case of holding or anything.

I’m here ta tell ya, that happened all game long, and it was one of a whole host of crooked calls the Saints got hosed with.

So the game ends up with that pass.

Interested in more national news? We've got you covered! See More National News
Previous Article A Little Announcement From Our Friends At The National Taxpayers’ Union…
Next Article ANOTHER MESS: Heard About The Arrested Referees?